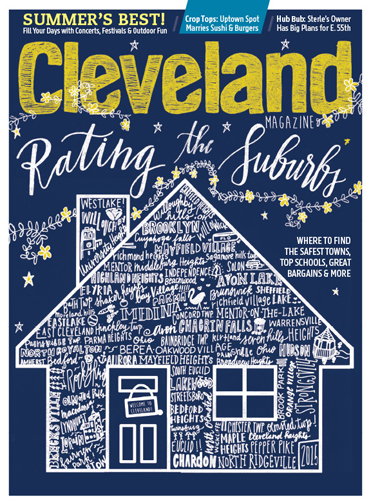 Steve Schimoler teams up with Matthew Anderson for an Asian-American fusion spot with a personality all its own.

Heat up your backyard grilling with these chef-driven takes on the standard skewer.

The Cleveland Bench art installation strives to bridge our differences and bring us together as a community.

In honor of Father's Day, we asked five Clevelanders what their dads taught them.

Be a sport in one of these fun summer adult leagues.

The RTA is swapping lawn mowers for goats and sheep for a pilot grazing program. Kari Solomon, RTA budget management analyst and Urban Shepherds board member, explains the positives and negatives of each ruminant.

Sterle’s Country House owner Rick Semersky thinks he has a recipe for revitalization in the St. Clair Superior neighborhood. With the Hub 55 development plan, he’s tapping into what made that area great in the past.

While winter was clinging to Northeast Ohio by its icy claws, none of the usual summer reveries — morning coffee on the front porch, the garden in full bloom, real tomatoes dressed with olive oil and fresh basil — kept me hanging on to sanity.

Since Crooked River Skatepark opened in November, 13-year-old Andrew Keller has been skating nearly 40 blocks from his home to the riverfront four to five days a week. The 9,000-square-foot

We look under the hood of ODOT's massive, five-year Inner Belt bridge project.

Get a behind-the-scenes look at the making of the popular baseball movie, Major League.

Be a kid again with tricked-out treetop escapes planted in the Cleveland Botanical Garden this summer.

Conductor Brett Mitchell wants to experience music with you.

Heinz Poll was a stickler. But the late Ohio Ballet founding artistic director's relentless pursuit of quality put the company on the national stage. He also left the legacy of the f

Shuffle your summer music rotation with these new local releases.

A show shines a spotlight on how the LGBT community shaped theater.

After attending the same festival for years, freshen up your weekends with these unique alternatives.

These amusement parks crank up your summer whether you're after a placid whirl on the carousel or a Millennium Force-sized rush.

Whether it's rollin' on the river for a sightseeing tour or rockin' the boat during a dance party, find the right summer cruise for yo

Rating the Suburbs: Call Ahead

With the help of the Cleveland Urban Design Collaborative, Elyria is ready to transform three of its major districts.

A new retail and entertainment district in Orange Village has sparked debates between its residents.

Rating the Suburbs: Drive In

Look for new high schools in these three cities.

A modest yet charming house gets an all-out renovation in downtown Medina.

Rating the Suburbs: The Case for Better Transportation

Gene Kramer, an attorney in downtown Cleveland, the 40-year Lakewood resident helped write the charter for Cuyahoga County's new government in 2008. He explains why Northeast Ohio needs to focus on being better connected.

Rating the Suburbs: The Case for Body Cameras

Kevin Nietert has been the chief of police in South Euclid for eight years and has served in the department since 1986. He strives to keep his department the most effective it can be, which includes introducing technologies such as body cameras. He e

Rating the Suburbs: The Case for Buying a House Now

One of the West Side's top agents, Howard Hanna's Kim Crane has been working in real estate since 2003 and sells $46 million in homes annually. The Rocky River native fills us in on why now is the time to strike on a home purchase.

Rating the Suburbs: The Case for Lifestyle Centers

These three suburbs are making it easier to enjoy the outdoors.

Cuyahoga Falls launches a waterfront plan to bring life back to its portion of the crooked river.

Rating the Suburbs: Wheels of Justice

After a series of car break-ins in 2013, Rocky River officer Edward Kolenc and his partner used their bikes to catch the perpetrators. Now, the city is rolling out its first bike patrol this month with four Giant Talon One bicycles equipped with red

Rating the Suburbs: Why I Love Aquadanza

Rating the Suburbs: Why I Love the Medical Detectives Course

Brighten up your regular backyard barbecue with this breezy guide.

The maxi dress makes its summer return with floral prints and bold patterns.