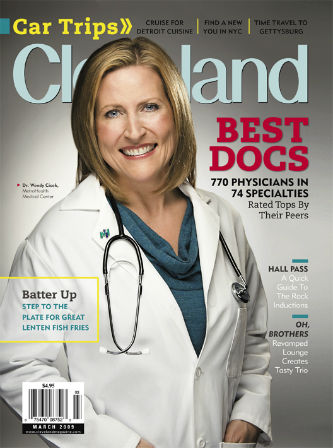 Rather than blindly following a critic’s ratings, judge for yourself.

Turn Up The Heat | Bodega

In 2006, Kristen Miller spent 62 days at the Cleveland Clinic, five of which while conscious with her chest open and a balloon pumping her blood. Now she faces another heart operation.

After the speed of New York and the superficiality of southern Florida, a writer finds a refreshing rhythm in our streets — then, after losing her job, must fight to remain in the city she loves.

Michael Scharf helps courts throughout the world punish those responsible for torture and genocide. His latest book, Enemy of the State, recounts his work as an adviser for the trial of Saddam Hussein.

The Rock and Roll Hall of Fame induction ceremony comes home April 4, bringing Run-D.M.C., Metallica and Jeff Beck to Public Hall. Here’s a guide to the ’09 performer honorees and how you can join the celebration in the week leading up to t

Find what you need to secure a good mortgage.

Everything you need to know to buy your first home

The Benefits of Homeownership

Discover your personal style or add a trendy twist to your closet at Lush Boutique.

Cruisin' for Cuisine in Detroit

New You in New York

The Grass is Greener in White Sulphur Springs, W.Va.

Evaluating colleges or private schools this spring? You'll find many trying new techniques to grap the attention of your kids.