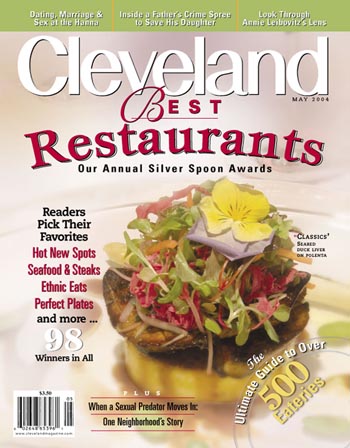 It's been a wild ride on the dining scene this past year, a rocketing roller coaster of openings, closings, arrivals, departures and resurrections. See who you, our readers, picked as the best in the biz.

Fredo LaPonza, one of the everyman finalists on NBC's "Average Joe: Hawaii," sounds off on fame, Fabio and what he's looking for in a long-term relationship.

Confessions of a Poppy Seller

They bloom every Memorial Day weekend outside grocery stores, strip plazas and wherever people congregate: the artificial Buddy Poppy salesman. One member of Solon VFW Post 1863 provides an insider's look at the tradition that has benefited needy and di

For Love Or Money

David Palange had a gambling problem and a daughter in desperate need of a transplant. So the Army veteran and former park ranger did what no one expected of him: He stole nearly $200,000 and disappeared.

Newcomers to Lorain County explain what drew them here.

For most golfers, the perfect shot carries powers of attraction that rival gravity, pulling us back to the course for another round (no matter how bad the last one was). We've found some notable Clevelanders who reveal what drew them to the game and wha

The Predator Next Door

In January, a sexual predator moved to Tanglewood Lane. The neighborhood hasn't been the same since.

Cleveland's accessibility is its greatest asset.

Dating, marriage and sex. You bet there's danger ahead. But as our reviewer and his wife discover, there are also a lot of laughs -- and a few poignant moments -- in the Hanna Theatre production of "I Love You, You're Perfect, Now Change."

Break out that dusty edition of The Preppy Handbook -- and brush up on dainty duds for spring's hottest styles -- with a twist.

Straight Eye on the Fashionable Guy

The metrosexual boom has fueled an explosion in men's fashion, accessories and grooming products.

Northeast Ohio's schools of fashion and design have a knack for turning out creative graduates.

If you're a bird, Canada's Point Pelee offers the perfect refueling spot on your northward journey. If you're a birder, that means this is the place to be in May.