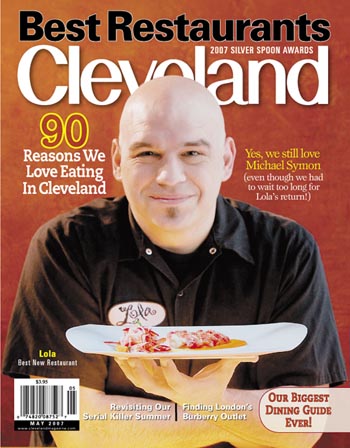 A Taste For: Gelato

If You Can't Stand the Heat...

Silver Spoons: Chef Boyardee isn't our only source of comfort

Silver Spoons: Lola's Back (And better than ever!)

Best New Restaurant: Talk about amorous advances: From the return of Lola - sexier and more sophisticated than ever - to ice cream's sultry move off the dessert menu and chefs who take tender care to prepare dishes from scratch, there's a lot to hold our

Silver Spoons: The world's cuisine is at our doorstep.

There are some restaurants that remind us of Nonna, Baba, Abuela or Oma. (Yeah, that’s Grandma for the rest of us.) What they lack in glam and style — and let’s face it, usually décor too — they more than make up for in what G

Silver Spoons: We Wish Our Dining Public was more adventurous.

Silver Spoons: We've moved beyond l'orange to birds that are duck, duck, good.

Silver Spoons: Yeah, these guys (and gals) are good.

Silver Spoons: You can get good sake.

Silver Spoons: You can get some big tastes from small plates.

Cleveland Heights High’s small-schools concept hopes to stem an exodus of students from the district serving one of Greater Cleveland’s most integrated communities. And, while it has shown success boosting grades for troubled students, it̵

Cleveland's dining scene has most of the ingredients for success. Now it just needs a healthy helping of respect.

To stop our region’s decline, black and white Clevelanders need to come together, conquer mistrust — and embrace a new system of government.

Though priests are mandated by the Roman Catholic Church to remain celibate and unmarried, Linda and Phil Marcin were called to marriage and wed in 1982. Linda’s husband was laicized, forbidding him from performing priestly duties. But since canon l

All his victims were people who had changed courses in life, seeking a second chance. Now, 25 years after Frank Spisak's serial murders terrified Cleveland State University, the death-row inmate gets a second chance at avoiding execution. In a courtroom,

J.T. Lightning, aka James Haase, has brawled in 969 big-time-style matches and leads the crew known as Cleveland All Pro Wrestling. Trust us, he’s ready to rumble.

Mayor Ralph Perk’s moment in flames (left) is one of the Press Club of Cleveland’s classic newspaper photos on display at Nighttown (above).

Cleveland Museum of Natural History curator Michael Ryan digs dinosaurs — literally. Six years after his 2001 expedition that turned up a fossil of a then-unidentified creature, he’d like to introduce you (and the rest of the world) to Alberta

Come for the Crown Jewels, the famous bridge or Buckingham Palace. But don’t miss London’s best-kept secret, the Burberry Outlet.

Living It Up In Retirement

Should you stay at home or move to a retirement community? Either way, there are plenty of ways to stay active and happy in your golden years, plenty of options to help you and plenty of questions to ask.