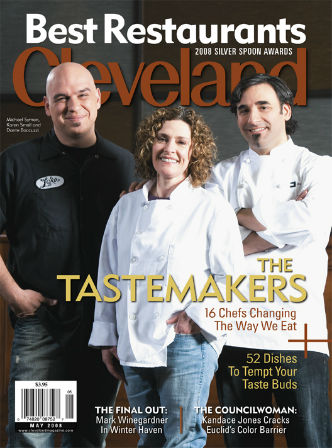 The Justic Department sued Euclid under the Voting Rights Act to give candidates like Kandace Jones -- Euclid's first black city councilperson -- a fighting chance. Now Euclid itself has an opportunity to move beyond old divisions.

When Mark Winegardner moved to Florida 11 years ago, Indians spring training became one of his last connections to Cleveland. Now his son is off to college and the Indians will train next year in Arizona, cutting his final ties to the only place that e

What do you do when it’s time to grill, but not full al fresco dining season?

Cleveland needs more activisits like Ed Hauser to strip the facade from our government  and reveal the awful truth of how insiders manipulate the public.

As Jennifer Hanselman celebrates her fifth Mother’s Day with multiples, we asked her what she’s learned from mothering seven little ones (including six 4-year-olds).

Fairview Park’s Don Pope is among the strongest men in the world. When he’s not pulling a train, lifting an SUV or carrying two refrigerators at the same time, he works as a facility manager for valet and parking at the Cleveland Clinic.

You don’t want to be on the business end of Carl Monday’s microphone. As the television sweeps period arrives this month, we talk to the city’s veteran investigative reporter about the finer points of literally chasing down a story.

Philip Metres immortalizes our town’s gloomy days in “A Cleveland of the Mind.”

A new MOCA exhibit looks at time through the eyes of a cancer survivor.

Get Your Kicks Here

Turns out, our neighbors to the north know how to throw a party — and everyone’s invited

Leave the ‘R’ word out of it.
New ideas for housing geared toward mature adults lure them from the nest sooner.