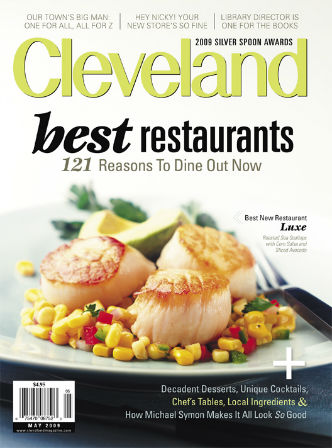 When you’re hungry enough, the West Side Market’s iconic clock tower resembles a tasty baguette reaching toward the sky. (Come on, work with us on this. We were famished.) If you don’t buy that, maybe you haven’t checked out the we

When you’re hungry enough, the West Side Market’s iconic clock tower resembles a tasty baguette reaching toward the sky. (Come on, work with us on this. We were famished.) If you don’t buy that, maybe you haven’t checked out the we

James Bond religiously opted for his vodka martini, and Carrie Bradshaw had her cosmopolitan, but would it have killed either of them to switch it up a bit? (Well, maybe for Agent 007.) But it’s less risky for you to stray from your signature drink.

There’s something about desserts that relieves stress and incites happiness. Maybe it’s the soothing ability of ice cream or the scent of apple pie that takes us back to our childhood. Whatever it is, local chefs know that familiar is good, bu

Silver Spoons: In the Hot Seat

Watching a chef deftly run a busy kitchen, it hits even the most accomplished at-home gourmet: Wow, I am nowhere near that good. The chef’s table is the foodie’s version of sitting courtside. Here are a trio of places we recommend grabbing an

Since 1993, chef Marlin Kaplan has opened five Cleveland restaurants and closed three. Ten years after launching the elegant One Walnut downtown, the native New Yorker is celebrating the first anniversary of Luxe, a quirky and relaxed Detroit Shoreway spo

A meal should not end when the plates are cleared. Kicking back and taking in the experience is part of the allure of dining out. So relax, and order a digestif such as Cognac or a sweet, house-made dessert drink. If you want to take a pass on the alcohol

To celebrate the balmy temps soon to arrive, we’d like to honor the equally steamy bowl of soup. Wait. What? You’re not up for hitching a ride on the chili train once the buds pop? We’ve found five soups you don’t have to wait unti

The next time you dine out, locavores and carnivores alike can relax and order that 16-ounce rib eye or stuffed pork chop. Area chefs have got your back (mmm ... baby back ribs). They’ve been on the buy-local bandwagon for years, serving up all kind

Drink in the tastes of Spain with Tempranillo

Laminate counters or linen-draped tables? Burgers or balsamic reductions? No matter what, this former waitress maintains it’s the service that makes or breaks the meal.

Back to the Garden

Maurice Small is a man with a message: Roll up your sleeves, get your hands dirty, and grow what you eat. A green thumb since his father taught him the basics, Small now takes this and other lessons to city dwellers whose access to fresh foods has become

Felton Thomas, Cleveland’s new library director, is a dynamic leader, but he’s no self-made man. He owes his success to his neighborhood library in Las Vegas and to mentors who helped him at every key moment in his life. Now he wants to do the

Walt Laveen can easily name the most productive Cleveland baseball players of all time (it’s not who you think). This North Ridgeville teacher’s passion for a statistics-driven game makes your fantasy baseball league look like kid stuff.

Trooper Byron Foxx and Sgt. Matthew Witmerrescued a woman from a burning car in December and were awarded the Ohio State Highway Patrol’s most prestigious award. Deborah Berry,a 52-year-old Parma resident, was pulled from that burning car following

He knows struggle.  He knows hard work.  He wants to win as badly as we do.  Here’s why a 7-foot-3 Lithuanian is as true a Clevelander as any of us will ever be.

A retired carpenter finds a way to use his passion for art to give back to Cleveland. Walley Two Hawks spent 13 days completing this mural of the downtown Cleveland skyline.

Nicky Nicole dazzles with everything a little girl could want — and more.These Japanese erasers come in a variety of shapes.