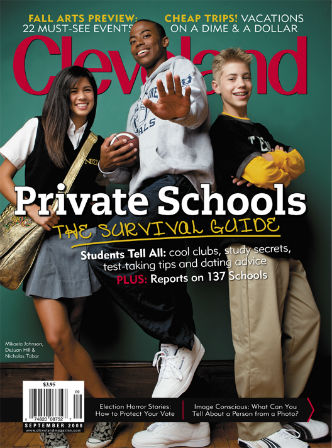 (in the kitchen) Metro Mix

Better with Age: The Baricelli Inn

Luxe: A Star is Reborn

Randall Grahm’s unconventional approach has the Central Coast riding high in the saddle.

As Cleveland’s daily paper shrinks and its alt-weeklies merge, our writer remembers a city electric with news and a time when reporters exposed kickbacks and abuses. Today, the town needs good journalism more than ever, but what will fill the voi

On Election Day, the whole world will be watching Ohio, and especially Cleveland, to see if we can vote without a hitch. In 2004 and 2006, we screwed up. How our voting system has gotten better, what could still go wrong — and how you can protect yo

The weak spots in Cuyahoga County’s voting system could bedevil us again in 2008. Here are the biggest things that could go wrong, and how you can protect your vote.

Chess gets all the attention, but Richard Beckwith of Willoughby knows how to play a mean game of checkers. He and a host of other players, including some of the world’s best, will gather in Medina this month to do battle. Who says this is kids&#

A year ago, Chuck Herndon saw a Cessna crash into the black water of Lake Erie near his Kelleys Island home. He paddled out to save 7-year-old Joel Hutchison of Lima. Joel’s father, Jeff, and 9-year-old brother, Jeremy David, were killed.

The strange fight over choosing a system that wouldn't lose votes

23 Must-see Events Between Now and the Holidays

Fortune Battle of the Corporate Bands

Heresies: A Retrospective by Pedro Meyer

Inspired by his mentor, the Rev. Albert Wagner, Michelangelo Lovelace uses his art to bring racial and social issues to light.

New Kids on the Block

The Three Pillars of Punk

Esquire writer Scott Raab takes on Hollywood as only a native Clevelander can. We talked to him about his new book and found out why Sean Penn and Bill Murray are the celebrities most likely to fit in here.

Home Away from Home

Cheap Trips: Where to Go

Rules to Live By

During the summer, we asked Northeast Ohio private school students in grades six through 12 to take an online survey*. More than 200 students participated.

Private Schools: Survival Guide: How To