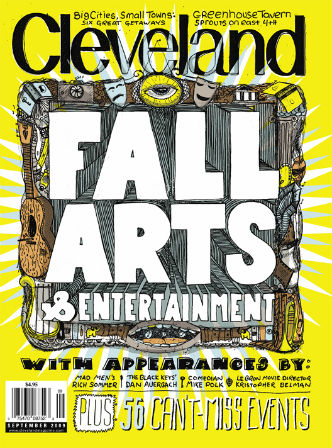 The Greenhouse Tavern has been making a splash on East Fourth Street over the past year.

Divine Reinvention
After closing his namesake Valley View restaurant this year and battling through a spring cancer diagnosis, Dante Boccuzzi plans to return to the dining scene on Sept. 15. He’ll reopen a m

On Tap: A Wine Tail

Arrested to Support a Cause

Sister Diane Therese Pinchot was arrested during an annual protest at the U.S. Army base in Fort Benning, Ga. El Salvadoran National Guardsmen trained there murdered and raped three nuns and a missionary in 1980, including Pinchot’s friend, Dorothy

From Laughing Sal to Rocket Ships, the sights, sounds and tastes of Euclid Beach Park will be revived this month to mark the 40th anniversary of the beloved landmark’s closing.

They are part of what has been described as America's most hopeful, technologically dependent and heavily parented generation. Eighteen months in the lives of three Lincoln-West High School students show why it's different to be a Millennial in one of the

Terry Schwarz's Pop Up City concept is already an intriguing way to reinvent the vacant urban spaces. She's hoping it'll be much more.

To Spell and Back

Battle of the Self-Portraits: Gauguin vs. Close

Curators from both the Cleveland Museum of Art and the Akron Art Museum give us the play-by-play of each painting.

While you can check out Cleveland's funniest tour guide at the Comedy Festival, there are other comedians who will leave you in hysterics, including a loudmouth, a tough chick, and a slacker.

From heading to Severance Hall to hear the Cleveland Orchestra to a one-day event filled with local artists, Clevelanders give us their picks on what you can’t miss this fall.

Despite numerous setbacks, Aerosmith’s Joe Perry says the legendary band is ready to give fans a whole new experience.

The Seed of an Idea

Where to Spend Your Money

With the debut of its third location, Next boutique has evolved from unique sneakers to high-end fashions.

A Haunting on the Bay

A Simple Time and Place

Outside in the Steel City

The Road to Good Times

More Than a Homework Assignment

How a 10-minute documentary by an Akron native turned into a film showcasing the early years of LeBron James and his high school teammates.