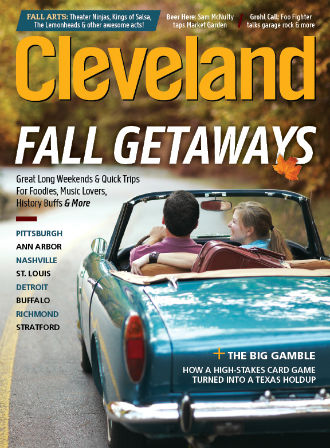 Life is fast, your meal shouldn't be. Tapas let you tap the brakes and enjoy.

A Repair to Remember

Sam McNulty believes in beer. The world-traveling 37-year-old entrepreneur behind Bier Markt, Bar Cento and Speakeasy has a new place in Ohio City and a vision of a neighborhood built on barley and hops.

As deer fill up backyards and roadsides, Northeast Ohio once again wrestles with a dilemma: to shoot or not to shoot.

Life According To Lainie Hadden, Philanthropist

The bubbly philanthropist who helped save Playhouse Square died Sept. 20 at age 88.

It was just a regular Monday night no-limit poker game: a bunch of guys, a Lake Avenue apartment, pizza, beer and $200 buy-ins. But there was a wild card in the deck, someone willing to bet it all on a stickup.

Don Plusquellic faces one of his toughest tests to win a seventh term as the Rubber City's mayor.

Singer Ashley Brooke Toussant hits the right notes with the release of her first full-length album.

The Foo Fighters return Sept. 20 in support of Wasting Light, an album the band recorded on analog tape at Dave Grohl's home.

On the Community campus, Yvette Nicole Brown has become the heart behind the snark.

The city's most famous rock writer, Jane Scott was as thoughtful as she was pioneering.

Students of all ages will be ready to head back to school with these fun items.

It's not hard to find personalized jewelry these days, but few parallel the craftsmanship of Heather Moore.

A trip south to Richmond, Va., helps us remember the Civil War and Emancipation 150 years later.

The idyllic town of Stratford, Ontario, sets the stage for performances the whole family can applaud.

Nashville plays more than one note, with music, dining and attractions to fill lazy days and lively nights.

St. Louis' revitalized neighborhoods and sites hang on to their historic charm.