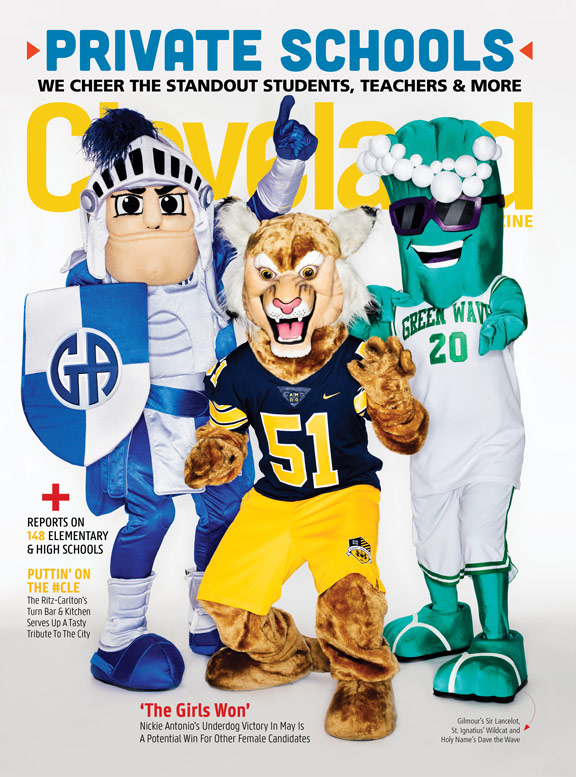 5 To Sip: Hard Ciders We Love

Crack open these fall-favorites this month.

Dive Into These Devilish Details About A New Foodie Trend

A classic English snack, devils on horseback have become a Cleveland staple at restaurants such as Lakewood's Deagan's and Ohio City's Flying Fig.

Foyer Cafe Is A Home Away From The Office

Lox, Stock And Brisket Is A Slice Above

Polpetta Brings A Whole New Ballgame To The Culinary Scene

After closing two other restaurants, Adam Bostwick and Brian Okin have the balls to open a third.

The restaurateur talks about eliminating plastic straws at his Ohio City spots.

Three Craft Beers You Have To Try Now

Get dinner on the table in a snap with these bites.

Turn Bar & Kitchen Goes All In On CLE

The Ritz-Carlton restaurant shines a light on our city's great neighborhoods.

She's part of a wave of women shaking up Ohio politics in the age of #MeToo and Donald Trump. Meet Nickie Antonio, who is poised to join the state senate.

4 Questions With The Downtowner Hosts

We talk to hosts Amy Eddings and George Hahn about downtown living.

A Daughter Finds Her Place By Running Cross-Country

She hit her stride and found strength, courage and independence.

Lessie Brown is the oldest known person in the United States. Here's her story of family, faith and appreciating every day. (Plus, her famous sweet potato cobbler recipe!)

In Saying Goodbye To Dick Feagler, Cleveland Loses Its Voice

His death marks the end of an era in Cleveland journalism.

Lessons Learned Beyond Our Borders

Editor Steve Gleydura shares how his daughter's trip to Ecuador was an eye-opening experience.

We're ready for a winning season, or at least one win?

In a summer full of art, comic artists and graphic illustrators refuse to be left in the shadows.

Three Books Every Clevelander Must Read

Stories from Harvey Pekar, Don Robertson and more are necessary reading for all Clevelanders.

Veterans Get A New Soundtrack To Their Lives

DREW works with veterans to chart their lives with music.

We talked to former program director John Gorman about the lasting legacy of Cleveland's rock station.

They're not as easy to keep alive as they appear.

How An Abandoned Ballroom Became A Hip Living Space

You'll be jumpin' and jivin' for a peek at this cool crib.

Sherwin-Williams Throws It Back With Their Paint Colors

Check out its new historic collection that is based on its archives from the 1920s.

We put a writer under the vacuum to test the latest skin care trend from Gingie Spa & Massage.

The store has a variety of home furnishings, clothing and more.

The high-end thrift store in Lakewood and Coventry sells their hottest items via Instagram.

12 Places To Check Out On Picturesque Cedar Fairmount

From a 40-year-old independent bookstore to a jazz-era nightclub, you'll want to visit this Cleveland Heights hub.

Date Of The Month: Take A Train Ride

Get In On The Flaming River Con

The Hamilton Collaborative will host the annual fusion of technology and art.

The Hathaway Brown senior is a math whiz, practices kung fu, plays the violin and illustrates her own graphic novel.

Private Schools: Annie Yantek Moves To The Beat Of Her Own Drum

The University School senior shines in theater and speech and debate.

Private Schools: Equestrian Andrew Elhindi Takes It All In Stride

The 17-year-old senior plays doubles-tennis, edits a school publication and went to the semifinals for congressional debate in 2017 and 2018.

The Lake Catholic High School president reflects on the importance of faith and how his career in business informs his leadership.

Private Schools: Maddy Wanke Sings Her Way To A $10,000 Scholarship

The 17-year-old musician performed on stage at Severence Hall on New Year's Eve.

Report card for the coed Christian school in Elyria.

The farm manager and guide teaches chemistry, physical science and biology on the 97-acre farm.

The St. Martin de Porres student's The Slipstream Drive was performed by local actors in June.

Vital stats on the Catholic coed school in South Euclid.

Private Schools: What It Feels Like To Create Tribute Videos

Private Schools: What It Feels Like To Grow Food For Others

Private Schools: What It Feels Like To Play Basketball In The Dominican Republic

Carter Wright, an Open Door Christian Schools senior, talks about love and diversity on and off the court in the Caribbean country.

Private Schools: What It Feels Like To Spend Time With A Stranger During Their Final Days

Villa Angela-St. Joseph High School graduate Christina Vollman shares what she learned while comforting those who lost loved ones.

Private Schools: What It Feels Like To Volunteer With Hurricane Relief Efforts

Private Schools: Your Primer On Elementary and Middle Schools

Our report on 112 Northeast Ohio schools.