While big questions remain — like who is going to pay for it, how long it will really take and what makes this project different than proposals in the past — there are big dreams for Cleveland’s downtown.

Today, the City of Cleveland and Bedrock announced a new master plan for riverfront development in Downtown Cleveland near Collision Bend. The project centers around a 12-acre public park and a “shore to core” redevelopment mindset that reimagines Tower City as a “town square” that connects the Cuyahoga River to Public Square. Developers hope the space can be a hub for industry, culture and recreation.

The architect on the project, David Adjaye, has completed notable projects such as the Smithsonian National Museum of African American History and Culture in Washington, D.C., and the National Cathedral of Ghana. He describes the vision as an "intimate city that hugs the riverfront."

When asked, officials estimated the overall price tag at $3.5 billion and the project is expected to take at least 15-20 years to complete. The plan is likely contingent on a public-private partnership, similar to projects such as the recent Rocket Mortgage FieldHouse renovation.

“Our redevelopment strategy for the downtown Cleveland Riverfront taps into the lost heritage of the city, establishing a new relationship between the urban core and the shore,” Adjaye says. “As I became more deeply immersed, the need to build a more tempered flow of movement through the city became immensely clear.”

The 35-acre vision includes 2,000 new residential units, 850,000 square feet of office space, more parking and at least 12 acres of parks. A series of plazas, terraces and “pocket parks" would cascade via elevators, ramps and stairs down the nearly 100-foot elevation drop from Public Square to the Cuyahoga River, which would open up to green space on the river front. 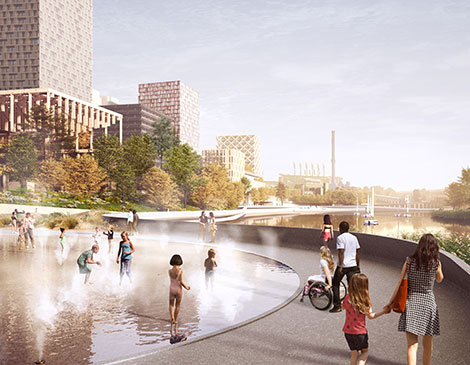 The main connector would be Tower City. In addition to internal and external updates to the historic building, developers would also have to remove or go around obstructions like Huron Road for a seamless path to the riverfront. The plan essentially splits the land into three distinct neighborhoods, according to the presentation.

“As the crown jewel of downtown Cleveland," says Bedrock CEO Kofi Bonner, "Tower City will serve as the seamless pedestrian connection between the riverfront and Public Square, forging new and enhanced paths for commerce, activations and transit.”

Though he attended by video call, Adjaye described how months of visits to Cleveland informed his blueprint. He said he was surprised by the city's diversity as well as its natural and cultural assets.

“Our redevelopment strategy for the downtown Cleveland riverfront taps into the lost heritage of the city, establishing a new relationship between the urban core and the shore,” Adjaye says. “As I became more deeply immersed, the need to build a more tempered flow of movement through the city became immensely clear.”

Honestly, it's a lot to chew on for a quick-hitter news story. Don't worry; we'll follow up with much more on this project. For now, here are a few other takeaways from the presentation: 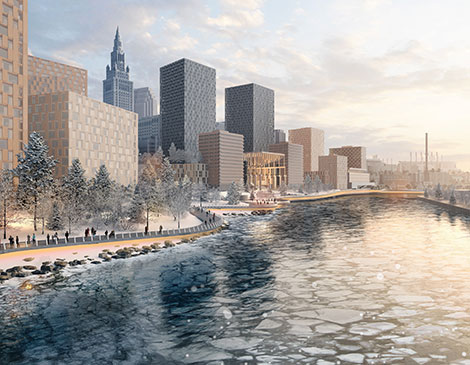 The proposal is still a long way away from becoming a reality. There is no expected start date for any of the construction and a number of hurdles remain. Over the next six to eight months, Bonner described a process of more research, more presentations and more conversations. It will also include a plea for funding, public or otherwise. Cleveland City Council President Blaine Griffin said he's been pleased so far with Bedrock's collaboration with City Council.

"One of the things that they've already been embracing and talking about is how we can make sure the entire community in the city of Cleveland benefits from this project," Griffin says, "so that we start out the right way and this doesn't become a downtown versus the neighborhoods, but that this becomes an inclusive project that everyone in the City of Cleveland and, quite frankly, in Ohio is able to enjoy."

Stay in the know by signing up for our free weekly “In the CLE” newsletter — your guide to fun throughout The Land. Arriving in your inbox every Wednesday, it fills you in on everything from concerts and museum exhibits to the latest news and profiles of Clevelanders. Click here to subscribe.