National Geographic photojournalist Brian Skerry brings the magazine’s readers along on his deepest dives, and educates them along the way. This month, Skerry hosts a live presentation of his underwater work at Playhouse Square’s Ohio Theatre June 9. From fantasizing about the adventures of Jacques Cousteau on New England beaches to creating his own marine expeditions all over the world, we took a deep dive with Skerry about his work and the importance of underwater preservation. 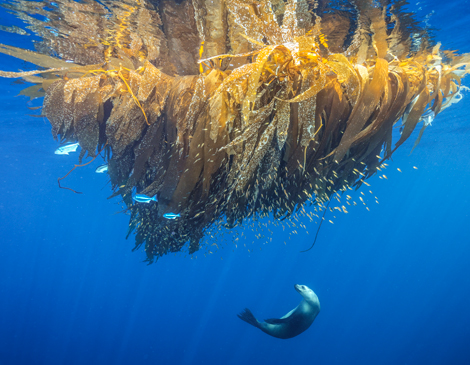 Cleveland Magazine: What is one of your most memorable underwater moments?
Brian Skerry: One of the places I went to in early September 2016 was [the Papahanaumokuakea Marine National Monument], a place that President [Barack] Obama had just created days before as the world’s largest marine protected area off the northwestern Hawaiian Islands … When I got there, I actually received an invitation from President Obama to join him to go snorkeling that day. He loved the water and was an avid diver and snorkeler, so I accepted the invitation and I spent 2 1/2 hours snorkeling with President Obama over these beautiful coral reefs that he had just protected. I made the very first photographs of a U.S. president underwater.


What are some important lessons you've learned in your years of ocean photography?
I started diving when I was about 15 years old. I just wanted to be an ocean explorer. I was growing up going to the beaches in New England where I lived and I had a little built-in swimming pool in the backyard. I used to put on my mask and fins and pretend I was working with Jacques Cousteau and doing all these cool things I was reading in National Geographic. In the beginning, I just wanted to make pictures or photograph things that really interested me, but along the way, there really has been this evolution in my thinking and in the things that I've learned. I've seen so many problems occurring in the world's ocean — things that I never expected and things that most people might not be aware of. Unless you're poking your head beneath the waves on a regular basis, you might not know about many of these problems. As a journalist, I've tried to share what I have learned about these problems with people around the world. I do believe there are solutions if we just have the collective will to move in that direction. The ocean is not too big to fail. We’ve always sort of believed throughout human history that it was vast and endless and had limitless bounty. That we could take and take and take, and that we could dump our trash and chemicals back into it and it could just deal with that. But the reality is the ocean is fragile. It's suffering a death from a thousand cuts. We've put so much carbon into it that the ocean is becoming acidic and coral reefs are dying. I'd like to think that as a journalist doing this combination of work, that both celebrates the sea on one hand but also problems and solutions on the other, is a good plan, a good way of helping people to care and maybe want to do something about that. 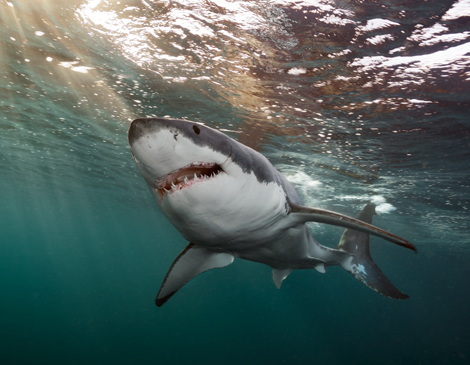 What are some challenges you’ve faced in your career?
Every time I do these stories, I learn more about the state of the ocean and the problems that are happening. I've been working for National Geographic for over 20 years, so early on in that process 15-plus years ago I started seeing these problems and started turning my cameras toward those issues and started doing some environmental stories about the oceans. I did a cover story that was published in 2007 about the global fisheries crisis and the fact that 90 percent of the big fish in the ocean are gone because we've taken the sharks and the tuna and the billfish. We continue to kill an excess of 100 million sharks every single year. You can't kill 100 million impactful predators and expect any ecosystem to be healthy, and that's what's happening in the ocean. As a storyteller and as a journalist who wants to tell good stories and get people engaged, for me it's about finding new ways to get at those issues, so sometimes you do the sort of doom and gloom stories, where you show all the sharks being finned or dead animals in nets and I approach it like war photography. Other times, it's about celebrating. Four of my most recent stories in the last couple of years for the magazine were about sharks and each one of them different top predator species but it was more celebratory. I was trying to get people to give these animals a bit of a makeover and show them as not villains and not something we should only fear but something we can respect. Maybe that would help stop the eradication.

What is the best part about capturing underwater life?
I guess the best part is being able to capture those images and share it with people. It's a great joy that never diminishes. After 20 years and now working on my 28th story for the magazine, I still get a real thrill out of seeing the published story and doing speaking engagements where I get in front of an audience and share these personal stories. I think that's one of the great things about the human species is that we go back to ancient times where we'd probably sit around a campfire or something, and we would share stories, and that's a very human thing. To be able to do that visually and be able to do it in a place where not so many people get to go to into the ocean, and share images and my experiences is a great reward. I think that that's the joy for me. You hope that it resonates with people and usually it does.

What makes a great photo?
I often tell emerging photographers that you can get the technical aspects right, and you can shoot 100 pictures of essentially the same scene, and they might all be exposed right and the composition is nice, and everything is in focus, it all looks good, but the one that gets published has got something a little bit special about it. It could be what comes down to these somewhat intangible things I often refer to as gesture and grace in a photograph. You could be shooting a street scene in a Paris cafe or Cleveland cafe and people are sitting there drinking coffee, or it could be a lounge and they're having wine, or a city sidewalk somewhere and the scene is great. But there's one photo where maybe the light is hitting the windowpane just right, or there's a reflection, or the person's hand is doing something that adds a certain quality to the photo, or it could be, you know, a picture of a wildlife bird. You could shoot 100 pictures of that bird or a scene of birds, but the wing in one is just in a certain position and it does something to you. When you see it it's like: "Whoa, that one is really special. Look at that." By shooting a lot, and being open to serendipity, I think you'll be prepared when that moment does present itself. 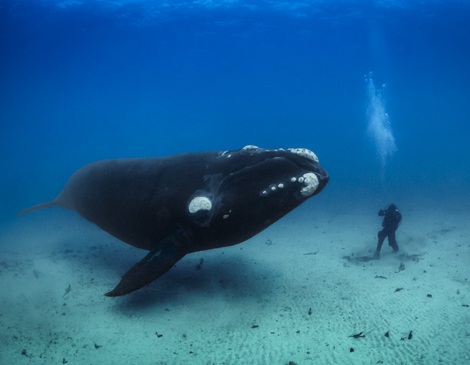 In 2008, you captured an iconic photo of your assistant alongside a 45-foot-long southern right whale off of New Zealand. What was that experience like?
I could have gone to South Africa, or Patagonia, Argentina, places where they know these animals exist, but I chose to go to this location in the sub-Atlantic of New Zealand because it was a brand new population that had just been discovered and it was very speculative because nobody had ever photographed them before. I didn’t know exactly how good the visibility would be and if I could get close. I didn’t know any of those things but I decided to try it. I went down for three weeks in the Austral wintertime in a sailboat and that was a little dicey in itself. I started diving alone for a few days because I was afraid that even one lone person in the water would scare the whales. But after a few days I started getting some pictures and I felt pretty good about how it was going. Then I had this picture in my mind of a human with the whale. The water was about 70 feet deep and I asked my assistant to come in and do that very thing, stand at the bottom. You are working with wild animals so of course you can’t direct or control anything in any way. That day, we got on the bottom and this 45-foot-long, 70-ton whale was curious about us as they had been in the previous days and he hung out with us for almost two hours. I remember looking through my viewfinder and just thinking, I can't believe what I'm seeing. This is like a submarine, it's something the size of a bus swimming with us and choosing to interact. As an underwater photographer, I can't fit in some camouflage blind in the forest in the jungle, and wait for a month for some animal to walk by and use a 600 or 1000-millimeter lens. I have to get within a few feet of my subject, and I have to do it in a short amount of time because we can only stay underwater as long as the air will last on your back, so it really is up to the animal that lets you into their world and this is what these whales did. They had never seen humans before and they were curious.

Editor's Note: A previous version of this article stated the event would take place on Feb. 20. That event was canceled due to weather and rescheduled for June 9.