The cannabis industry is the modern-day gold rush, but Jack Grover refuses to be a prospector.

“Guys like Levi Strauss made money by recognizing that people needed durable clothes and shovels,” says Grover, co-founder and CEO of Grove Bags. “We don’t remember the guys who panned for gold.”

His own realization came during a 2016 dispensary tour in Denver. The 26-year-old son of former packaging company owners noticed the bags being used to store product were repurposed from the food industry. These glorified coffee containers were industry standard, he realized later. Yet they didn’t account for the plant’s respiratory process, which emits oxygen and water vapor, causing mold, weight reduction and damage of essential medicinal properties. “A loss of  .01 grams is a loss of $1 for these companies,” he says.

So he enlisted Ryan Carnevale, a friend from Babson College who had studied cannabis science and worked in cultivation in Massachusetts, and they designed Grove Bags to create a perfect environment for cannabis storage. Ranging from gram bags to 55-gallon drum liners, the containers use the plant’s naturally occurring water pressure to push dangerous gasses through the plastic, similar to vegetable packaging.

“Ryan is an up-and-coming expert in cannabinoids and anything cannabis-related, so he spearheaded the development of the product,” says Grover. “Then, I just read every textbook and article about packaging and polymer sciences that I could get my hands on.” 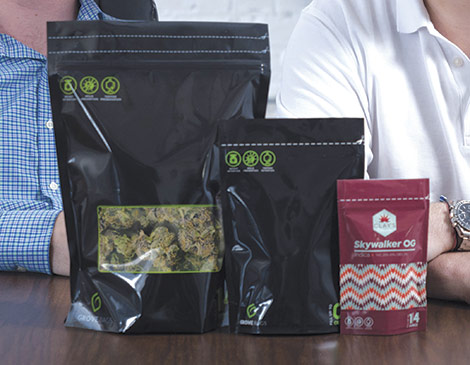 Since launching in 2016, the company, which wouldn’t share its revenue due to fundraising efforts, has grown to 25 employees, including nine local workers and seven designers who create branded packaging for clients. With a distribution facility in Twinsburg and another on the West Coast, Grove Bags hopes to soon add an East Coast facility and a Cleveland headquarters to bring all local employees under one roof.

While Ohio’s medical marijuana program sits in purgatory and recreational use remains illegal, Grove Bags and other companies in the supply chain are capitalizing on the budding industry.

“Ohio, as a collective state, would still be smaller than any of our top 20 customers, because the max size of a grow house is 25,000 square feet,” Grover says. “Single facilities out west are double that.”

Participating in a stigmatized industry from Cleveland does have its pitfalls. Banks are skeptical, a local lawyer declined to work with them citing his “fiduciary duty” and an insurance company quoted rates that were triple its normal one by classifying them as a “marijuana-related business.”

“Those are the same people who were smashing steam engines in England in the 1800s,” says Grover. “The Luddite mindset used to bothered me a lot, but now I don’t care at all.”

Over Budweisers in Cleveland Co-Labs, a cowork space in a former industrial building on Perkins Avenue and East 36th Street where Grover and Carnevale hold offices, Grover says his company aligns closer with Cleveland’s old-school manufacturing firms than the West Coast cannabis corporations of the future.

Here are three other local companies blazing a path in the cannabis industry.