“How do you say good morning in Polish?” a relaxed Glazen jokes before going live on-air.

The group, which includes Inca owner Ryan Florio’s parents in the background bagging tea, is assembled to announce Slavic Village as the setting for Chain Reaction, a live Fox 8 spinoff of CNBC’s Cleveland Hustles. The new show will broadcast as periodic live segments on Kickin’ It With Kenny throughout the summer. 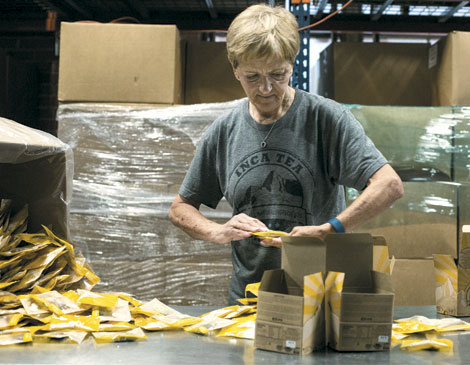 “This was the epicenter of foreclosures,” Glazen says. “Do you know what that can do to a neighborhood?”

On Cleveland Hustles, Glazen invested in Cleveland Bagel Co. But for this role he’ll be a producer and adviser as five small businesses get a boost — at least $130,000 each from investors, who have the option to pitch in even more — to hire staff, buy equipment or whatever they need to be successful.

The companies — which were selected from more than 50 applications last month — also get expertise from people such as real estate developer Fred Geis and Citizen Pie owner Claudia Young.

Unlike Cleveland Hustles, which focused on opening storefronts in the Gordon Square Arts District, Chain Reaction is open to all businesses, from retail to manufacturing, with the goal to create jobs.

“The winning teams are the businesses that can have the most impact in terms of jobs,” Glazen says. “Someone selling muffins out of their front door is great, but that doesn’t create jobs.”

Glazen offers his takes on the power of TV and commercial real estate.

On reality TV: Nothing ever goes wrong on reality TV. On [Cleveland Hustles], they would say, “Remember that conversation you and the bagel guys had three weeks ago about whether you should buy this equipment? Have it again.” All reality TV is performed that way.

On the value of TV exposure: It’s a dream come true. Every time we utter a word on camera, 300,000 people hear it. These businesses will immediately get hundreds of thousands of dollars worth of promotion. People like to get on board of certain horses, and this horse was designed for everybody to want to get on board.

On opportunities in the inner city:  You can put your money in the bank and get 3 percent interest. But if you’re thinking of getting 5 to 7 percent back, what better way than commercial real estate in a comeback neighborhood? There’s so much new housing going in [to Slavic Village], new businesses going in and a $10 million investment in streetscape going in. This neighborhood can’t possibly go down. The sky’s the limit.

When The Lake Freezes

Ohio poet laureate Dave Lucas ruminates on the beauty of an ice-covered lake.