In December, the Cleveland Cavaliers’ big man and Richfield native Larry Nance Jr. scored big when it came to the assist of small businesses. In a post on social media, he called on Clevelanders to send him apparel from local businesses that had been hit hard by the COVID-19 pandemic. He pledged to wear a shirt or hat from a different local establishment before every game and to post about the business on social media. In addition to creating awareness, he said he’d auction off that day’s jersey, match the winning bid and donate the proceeds directly to the businesses. Nance told Sports Illustrated in January that he received 400 to 500 entries. “Making a way out of no way is what Larry is doing, and it’s beautiful,” says Brittany Wiley, owner of Magna Wine Boutique in Bedford and Cuyahoga Falls. “The fact that he’s publicly showing love to all of these small businesses in the Cleveland area, where the funds are going to exactly who he’s promoting that day, is so special. It has a direct impact.” We talked to Wiley and four other beneficiaries of Nance’s efforts.

Boss Chickn Beer
When Nance announced his plan to boost local businesses back in December, Boss ChickN Beer co-owner Heather Doeberling’s inbox filled up. “It was our customers passing me this link,” she says. One of them even purchased merchandise from the restaurant and paid to ship it to Nance. “I just thought it was so cool that so many people thought of us,” she says. “When you realize you have so many people in your corner, that in itself can keep you going.” In late January, Nance chose Boss ChickN Beer. The owners plunged the funds they received into sourcing local beer. “He gave us this money, and we put it right back into brewers in our community,” Doeberling says. “It’s gone crazy. People are driving hours for our beer list.” bosschicknbeer.com

Grog Shop
On Dec. 23, the Cavs opened their season with a win against the Charlotte Hornets, and Nance kicked off his small business initiative by wearing a hoodie from the Grog Shop to the game. Proceeds from his jersey’s auction and the matching funds were nearly $8,000, which the live music venue put toward day-to-day expenses. “It’s really heartwarming to see,” says owner Kathy Blackman, explaining how it inspired her to share the love. “After all this happened with Larry Nance, we made a shirt and said we’re going to donate part of the proceeds to the Heights Schools Foundation, and the Cavs helped us spread the word. It’s paying it forward, so to speak.” grogshop.gs 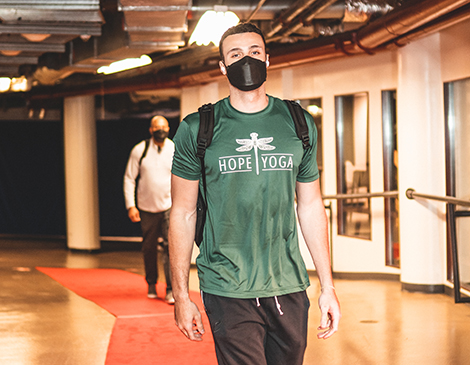 Hope Yoga Studio
Business plummeted for Hope Yoga Studio when it had to close for an entire quarter last year. Despite moving to a virtual format and ramping up retail sales, revenue still suffered. Being chosen in March as one of the businesses Nance repped was a “whirlwind,” says owner Jackie Walsh, who plans to use the funds to rebuild her studio’s outdoor space, which was destroyed in a windstorm last year. “I really commend him for stepping up and setting a good example,” she says. “There’s a misconception that we’re all being taken care of by the government, when that’s really not the case. Continuing to have people support small business is really important right now.” hopeyogacle.com 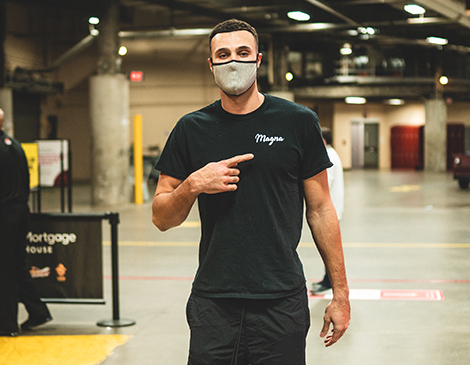 Magna Wine Boutique
Brittany and Dre Wiley opened their wine shop last March right at the start of the pandemic. “We were paying rent and utilities, but we weren’t even able to open until May [2020],” Brittany says. “We started out in the hole.” That’s why these Cavs fans were encouraged and excited to send Nance a handwritten note and T-shirt sharing their story. They were even more thrilled to be chosen Feb. 1. “It definitely created a buzz,” she says. “It’d be amazing if more athletes and more people who have a platform like his could do what Larry’s doing.” magnawineboutique.com 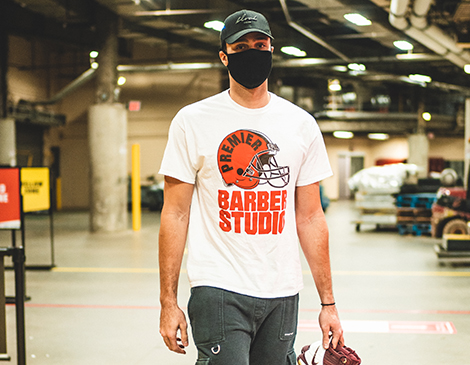 Premier Barber Studio
Barber and Cleveland police officer Jermaine Smith, who owns Premier Barber Studios with his wife, Roshonda, was “sick as a dog” with COVID-19 when he got notice that someone from the Cavs wanted to meet with him over Zoom to learn more about his business. Turns out, Nance himself was on the video call — a big surprise. “When he popped up, it was crazy,” says Smith. The Smiths explained the difficulty their business faced, having launched a second location just a few months before being forced to close due to the pandemic. “We made it through, but it hurt us pretty good,” Smith says. “It’s an awesome thing he’s doing for the city. It means a lot to me.” thepremierstudio.com