For Ryan Boone and Vinnie Cimino, COVID-19 has served as a wake-up call. Friends since they worked together at the Greenhouse Tavern five years ago, the chefs celebrated the opening of Lakewood scratch kitchen Summer House on March 9, 2020. A few months later, it closed due to pandemic restrictions. Rather than putting a fully stocked kitchen to waste, they teamed up with other restaurants, local food suppliers and farmers to create Cleveland Family Meal, a nonprofit food bank that provided provisions to hospitality workers and their families in need.

“Many of us thought it was a privilege to work in certain establishments and take less money so you could say that you worked in those places,” says Cimino. “But the pandemic showed us none of that matters anymore. The only thing that matters is being able to take care of the people who work for you and with you.” 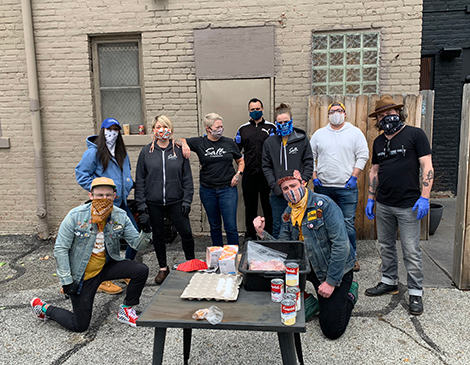 Earlier this year, the pair launched FatBoy Sammies, a series of sandwich-themed pop-ups with a ’90s vibe. They both strive to achieve the same goal that many others are struggling with inside the restaurant industry.

“Making a living wage is an inalienable right,” Cimino says. “You shouldn’t have to work three jobs in order to do that.”

As the world struggles to co-exist with COVID-19 and its variants, seismic shifts have occurred in every facet of life as we once knew it — including the workplace. That’s especially true in the hospitality industry where “Now Hiring” signs abound, but too few applicants have answered the call.

In a July broadcast of All Things Considered, NPR business correspondent Alina Selyukh cited low pay, rude customers and no benefits as reasons for the lack of interest. Then there’s the fact that many employees who were laid off received weekly unemployment benefits that amounted to more than their monthly take-home pay.

John Barker, president and CEO of the Ohio Restaurant Association, the business trade association for the restaurant and food-service industry, asserts the virus has clearly wreaked havoc on hospitality. Prior to the pandemic, Ohio was home to 23,000 restaurants. Because of COVID-19 and the restrictions that followed, 3,000 have closed.

The pandemic has caused people to value their time with many seeking work-from-home jobs. There’s also an increased attention on at-home childcare, especially since many day care centers have closed. Salary is another sticking point that’s given restaurant workers food for thought when it comes to seeking a new vocation.

“In 2019, the typical waiter or waitress in Ohio was paid a median hourly wage of $9.59, which puts a family of three well below the poverty level,” says Michael Shields, a researcher at Policy Matters Ohio, a Cleveland-based nonprofit institute dedicated to creating a fair Ohio economy through research and advocacy. “This is an industry where folks struggled well before COVID.”

Ohio’s minimum wage is currently $8.80 per hour. In 2006, Ohio voters decided to adjust it annually as the cost of living rises to make up for inflation. Information compiled by Policy Matters Ohio indicates that in today’s dollars, Ohio’s minimum wage was worth a little more than $12 at its peak in 1968. Since then, it has lost 28% of its buying power.

“The fact that [workers] have continued to be productive has not translated into wage growth for a really long time, and we need to restore some balance here,” Shields says.

Sam McNulty, owner of Market Garden Brewery, Bier Markt, Bar Cento and Nano Brew Cleveland, has seen his businesses grow to a staff of 220 since he launched it in 2005. Since COVID-19 struck, that number has decreased to 130. McNulty and his team are in what he calls “a rebuilding mode,” which he hopes will reboot that number.

Although he admits COVID-19 has ushered in a host of challenges, McNulty is quick to add that there have been some silver linings lately — including the fact that many of his furloughed employees who accepted jobs in construction or warehouse work have started to return. But that doesn’t mean there isn’t room for change. 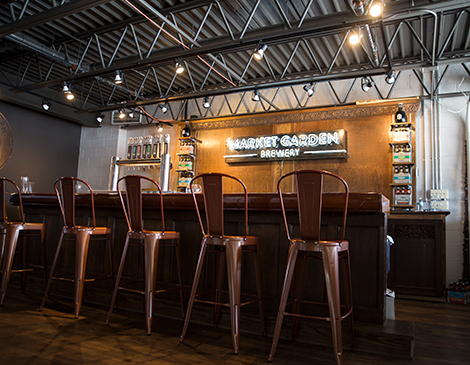 “In no uncertain terms, it’s forced a reckoning around the globe in every human beat,” McNulty says. “It’s forcing the hospitality industry, like so many others, to place more value on their employees.”

It’s a philosophy, McNulty explains, that he adhered to long before COVID-19 existed: Employees are paid “well above” market rate in hourly wages and salaries, health-care benefits are offered and McNulty hosts a staff appreciation party every year. He also posts openings on social media platforms and personally interviews anyone interested in working at one of his establishments.

The restaurateur reflects that as the hospitality industry brainstorms about how to take better care of its employees, slightly higher menu prices and perhaps different methods of delivery may result. Others such as Scott David Kuhn, founder and CEO of Driftwood Hospitality, predicts the next 90 days will make or break a lot of the businesses in the restaurant industry.

Pre-pandemic, 1,000 employees staffed Kuhn’s four establishments — Bin 216, Cibreo, Green Rooster Farms and Republic Food and Drink, all located in the heart of Playhouse Square — as well as the Welshfield Inn in Burton and Landerhaven in Mayfield Heights. That number now stands at 300. The decrease exemplifies the domino effect many in his industry are reeling from: Since Playhouse Square had been closed for over a year, theatergoers making pre- and post-performance reservations were absent. Weekday lunch, dinner and happy hour patrons were sparse, since many had been laid off, furloughed or working from home. As theaters reopen, Kuhn expects to add 200 employees to the payroll and his team are taking a closer look at what employees are looking for on the job.

“The minimum wage is really obsolete right now,” he says. “On average, Driftwood typically pays $15 an hour, but the goal is to have people do better.”

“COVID has put a microscope on a problem that has existed for a while,” says Kuhn. “I think restaurants are now looking at such things as personal time off.”

And like other restaurant owners, Kuhn is exploring myriad out-of-the-box ideas that span the gamut from partnering with babysitting services to cell phone providers in order to arrange discounts for his employees. He’s also diligently working with a PR firm to put together a package on a variety of platforms that presents Driftwood as the ideal place for people who have passion for hospitality.

“We’re putting the call out for good people,” says Kuhn. “I’ll send a pigeon with a note tied around its ankle if that’s what it takes.”

Inside Cleveland's Quest To Get Communities Of Color Vaccinated

With vaccination rates for communities of color lagging behind, area leaders and organizations are working to provide education and information in the hopes of getting more people vaccinated.

The die-hard Clevelander began her career as a reporter for The Morning Journal before editing Cleveland Magazine and Lake Erie Living.

A Clevelander's First Trip To The Muni Lot

One writer shares how his teenage trip to the NFL's most infamous parking lot was a coming of age moment that gave him his Cleveland Browns fan cred.