It’s been a big year for Downtown Cleveland’s college campus.

In August, Cleveland State University welcomed Laura Bloomberg as its new president. She promised to continue ushering in a new era set in place by outgoing president Harlan Sands’ CSU 2.0 plan, which set lofty goals of 4,500 additional students and 200 new faculty members by 2025.

“CSU 2.0 is an aspirational vision that is spot-on,“ she told us in August. “Once I pored over the CSU 2.0 blueprint, it was a big part of my realizing that this is where I want to be. I have no intention of shifting gears. I am fully in support of CSU 2.0. We might approach things differently, but the core principles stand.”

Now, Bloomberg and CSU want to take the next steps toward that ambitious future.

Today, the university announced a “Master Plan” designed to create a more compact, mixed-use urban campus. The proposal is a $650 million restructuring of the university’s urban campus to make it more compact and open to mixed uses. It comprises three components, which will contribute to academics, student residential life and community partnerships.

Though it has contracted Sasaki, an architecture firm that has worked with Case Western Reserve University and other colleges worldwide, the University says that there is no firm timeline for the project nor did it mention how it would be funded. The next steps include solidifying budgets, timelines and designs.

“Our location in downtown Cleveland is one of our greatest assets,” said CSU President Laura Bloomberg in a news release. “As an urban public research university, we have a special obligation to serve the public good. For CSU, that means providing an accessible, quality education for all on our campus, while serving as a catalyst for growth for our city and the region.” 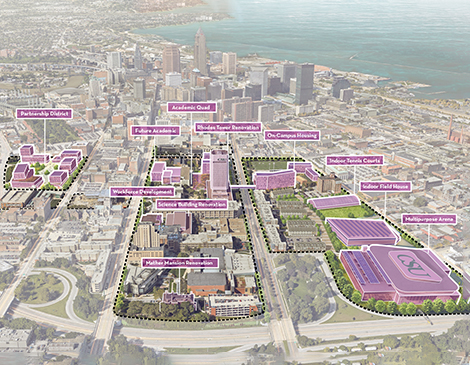 The biggest takeaway for most Clevelanders, however, is the potential of a new mixed-use arena that would replace the 31-year-old Wolstein Center. The new arena and a surrounding entertainment district would occupy the corner of Payne Avenue and East 24th Street and connect to the Student Rec Center, Krenzler Field and the university’s softball field on the west side of the campus. If all goes as planned, however, those venues would eventually be replaced by an indoor tennis court and new indoor field house. The 5,000-7,000-seat arena, much like its predecessor, would be home to not only Vikings sports games but also concerts and public-facing events. It would all be part of a “Student Residential Experience District,” as the school is calling it, north of Chester Avenue between East 18th Street and Interstate 90.

Renovation of Rhodes Tower, perhaps CSU’s most recognizable building, is included in the proposal. Currently home to the CSU Library, classrooms and offices, the building would feature a student center and other social spaces as well as 13 floors of housing. Across the campus, residential access for students would see a huge rise, with three new residence halls. These spaces will allow nearly 2,000 students to move onto a campus that has historically seen many commuter students.

Finally, the initiative hopes create more connections to the campus community. A planned “Partnership District” would be 800,000 square feet of mixed-use space designed to drive economic development and bring in partners for education, health and business.

“We’re excited about the opportunity to better link our students and the community to CSU athletics while creating vibrant entertainment opportunities in this part of downtown,” Bloomberg said in the release. “We want to enhance the experience for our students, student athletes and fans, and draw more visitors to campus.”

Stay up to date with everything Cleveland with our free weekly “In the CLE” newsletter — your guide to fun throughout The Land. Click here to subscribe.