During a week when protesters were calling attention to police brutality, Cleveland City Council member Blaine Griffin stood on the steps of City Hall June 5 and gave voice to a problem that for Black Clevelanders has been painfully obvious for too long. “We, as a city council, have used the voice of one of the most powerful institutions in the city of Cleveland,” Griffin said, jabbing a thumb behind him, “Cleveland City Hall, to state that racism is a public health crisis.” 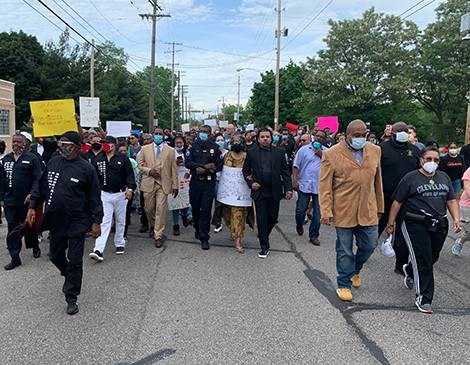 Griffin’s resolution, which makes that declaration, was unanimously passed by Council. It calls for the formation of a working group of more than 20 partners, including the City Council, YWCA Greater Cleveland, First Year Cleveland and other community organizations to propose policy solutions to address structural racism. Griffin introduced the resolution in March, but this was a conclusion he came to long before. He represents Ward 6 on the East Side and is intimately familiar with areas such as Woodland Hills, which have been shaped by historical segregation and racism.

As chairman of Council’s Health and Human Services Committee, he has worked to reduce Cleveland’s high rates of lead poisoning and infant mortality, which affect Black Clevelanders disproportionately. He also sponsored a bill to eliminate fines and jail time for possession of small amounts of marijuana, a crime Black Americans are charged with more often than whites.

The resolution is just the first step, but plans are being made, including an analysis of city laws and health disparities in Cleveland and the possibility of appointing a chief equity officer. The real toil, Griffin says, will be in prescribing treatment by allocating money and changing city laws. “Before you can cure something, you have to first identify it,” he says. “You have to understand what you’re trying to address. You have to actually recognize that it exists.”