Molly Pamela McKay feels empty any day she doesn’t get to create. But her expression takes many forms.

“I’m constantly creating and working toward a goal,’” says McKay, who admits those days where she spends four hours in the bathtub do occasionally happen. “A day without creating is a day wasted. I couldn’t imagine my life without it.”

Best known as the co-owner of Beet Jar, the chef and businesswoman set out to inject an artful, conscious approach to the Hingetown restaurants’ food, which includes vegan dishes, juices, wraps and more, and presence in the world from the get-go. But long before Beet Jar, McKay had been exploring her artistic voice in a variety of mediums.

Growing up with a visual artist as a mother, McKay says creativity has always been a part of her life, but the 33-year-old started taking art seriously in college while studying spatial art at Youngstown State University.

“I dabbled with ceramics, but at that point in my life I wasn’t making functional pieces,” says McKay. “I was doing a lot of installation work, wanting to go against what was normal, pushing the limits to see how far I could push people’s buttons, throwing in some political work there. Really just stating my opinion through art.”

She continued pushing boundaries by forming Cereal Banter, an experimental noise-jazz group where she made wild, distorted and sometimes abrasive sounds through keyboard and effects pedals, with her Beet Jar business partner and drummer Joseph Joseph. But around the time the duo formed Beet jar, McKay became enamored by the staying power of the functional pieces that filled her restaurant, her cupboards and our world. Soon, she returned to ceramics with a newfound passion, creating and selling minimalist tea mugs, bowls, coffee cups and more for the past 2 years.

“There's something about using something that took a lot of thought for somebody to create,” says McKay. “Now you have it for this short time, but who’s to say where it’ll be in 50 years? When I die, will somebody donate it to a thrift store. Will it get passed on?”

Now, partially thanks to the forced isolation of a pandemic, McKay finds herself in an especially fertile time. She’s taken up playing the drums (though the pandemic has made lessons tough), is flirting with an eventual return to Cereal Banter, has found ways to adapt Beet Jar amidst the pandemic and has created more ceramics in the past three or four months than any other recent period. We chatted with McKay about some of her inspiration and the work habits you can adopt in your own artistic pursuits. 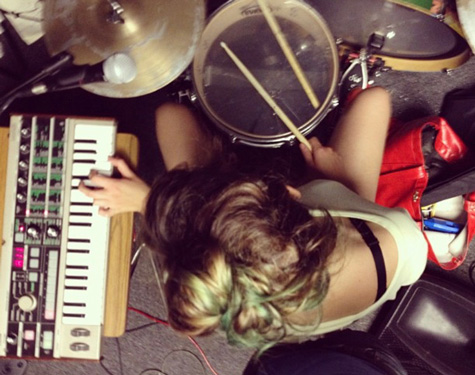 On Music And Cereal Banter
I started playing music when my business partner and I started Cereal Banter, which he still records and releases music under. It was just a duo. Yeah, the goal was to make noise, but it was also to be the most obscene version of myself I could be. There was a primal aspect to it. I let out this beast in me that I didn’t know existed. We played Death by Audio, [a music venue and equipment manufacturer] which is gone now, and some bonkers house shows in Brooklyn. We were in demand. But I hit a point, and it was a really great feeling, of knowing when I hit the top of it and I was done. I’d hit my peak. But sometimes I still listen to our album STIES OF PIGS FLYING WITH FLOWERS, FIELDS OF GREEN WATERED BY SHOWERS in the car sometimes, and it’s just like, that’s me? It doesn’t feel so much like a memory. It’s like, I can totally do that again. And maybe I will. But music is something that really heavily influences me. I usually am listening to something very intentional when I'm making ceramics. I compare a song to the texture or color of a piece, or how it lays in my hand.

On Finding Inspiration While Grieving Her Fathers’ Death
Two years ago, my father died, and I just felt like this creative push inside of me where I was, like you need to create something more like concrete. I got into a dark period of my life for a minute where it was just like, What happens after we die? Like, where do we go? Do we come back? And then it just created this whole thing where I wanted to create something that will be here when I'm gone, and I wanted to make functional pieces that can appeal to most people. And that's how ceramics came about. 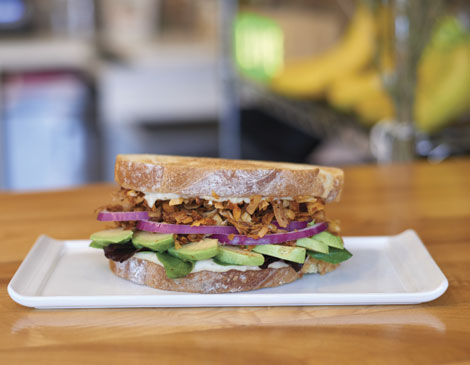 On Her Work Routine
I’m not a morning person, but Beet Jar has made me a morning person. I wake up very early every morning, around 4:45. I’ll hang out with my cat for a little bit, and get ready for work. I get here around 5:30 a.m. and start working. We’re here until about 3 p.m., and then I go to the studio for a few hours, go for a run, eat dinner and then do it again the next day. OK, OK, when I say I go to the studio right after work, sometimes I go to the park first, walk around the block a few times to get coffee. But this routine has helped me keep myself on track, especially during the pandemic. It’s easy to fall behind on your own goals. The routine works well for me because it allows me to have a sense of purpose for each day. If you’re not willing to make the time for art, you’re not an artist.

On How Running Has Helped Her Creativity
Running is more of a meditative process for me. This is a new endeavor I’ve come across. When I’m running, I’ll listen to something a little more heavy, like Tool, and I'm just thinking about my day. What can I do next? I’m constantly thinking about creating a new menu item, a new sandwich, new color sprays on a ceramic piece. I’m constantly going, and when I’m running, I can just be in my own zone. It’s replaced yoga, and it’s replaced therapy. 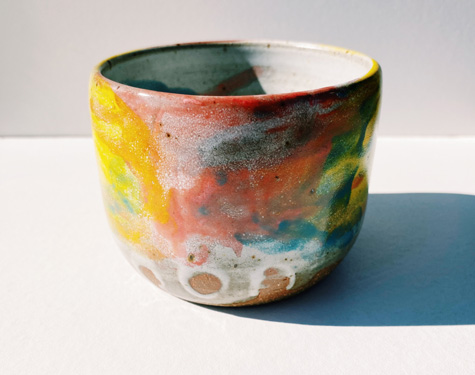 On The Advice She’s Give To Someone Attempting To Find Their Creativity
Just get a pencil and paper, and write down your thoughts and ideas. Start drawing, sketching, streaming words from your brain to the paper, and I guarantee something will come along. Maybe you think you want to paint, and you realize you're a writer. It can be overwhelming. You can feel like I can’t do this, I can’t do that. But you can do anything if you have the determination.

On How To Inject More Creativity Into Your Business
Stop comparing yourself to other businesses. When we were starting Beet Jar, we made it a pact that we weren’t going to go into other places for probably six months before we opened. We were so Isolated in our process. I think maybe that’s why Beet Jar is successful because from day one I never compared myself to other businesses. Everything here is an extension of what I love. I eat the food I make. I eat the products we sell.

If this last year has taught us anything it's that our city is full of resourceful, creative and inventive individuals who know how to come together when times get challenging.