Update: Twist Social Club is giving back during the football season with three terrific fundraisers. The first one kicks off September 12 with a Browns-and-booze-themed basket raffle. Its proceeds go toward the Casey Schneider Scholarship, which will be given to a St. Edward student involved in the performing arts program. November will see fundraising for Colors Plus in addition to a Thanksgiving food drive. The spirit of giving kindled, in December the club will partner with the First District Police Station for Shop with the Cops again, granting the wishes of children in need for the holidays.

The following story was published as part of our 2019 Essential Browns Guide.

There wasn’t a locked Victory Fridge at Twist Social Club last year. But that didn’t stop Jacob Amstel and Scott Swaggerty, the industrious co-founders of Browns Backers with a Twist.

Instead of a Bud Light-endorsed cooler that would later unlock upon the Browns’ first win in 635 days, gifting anyone nearby with free celebratory beer, the two made their own by locking up one of the beer taps.

“The noise inside that bar was like being at the stadium,” says Amstel. 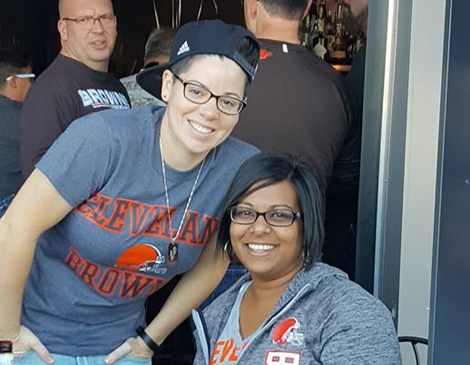 The Twist group is part of Browns Backers, an elite sect of Browns fans dedicated to supporting and promoting the team, with 355 sanctioned nonprofit chapters throughout the U.S. and 14 different countries, such as China, Germany and Israel. Many groups gather at their local bars to watch games together, organize fundraisers and more.

That dedication was appealing for Amstel, who grew up wanting to be a Browns Backer.

“I wasn’t aware of any other team in any sport that had international organizations,” he says. “I thought it was the ultimate fandom to be a part of the Browns Backers.”

In 2015, Amstel was watching Browns games every Sunday with other friends at Twist, but there wasn’t a large crowd.

With Swaggerty’s help, they decided to start their own Browns Backers chapter to try to make games more fun and engaging, making sure it was LGBTQ-inclusive and housing it at Twist where they met each week. 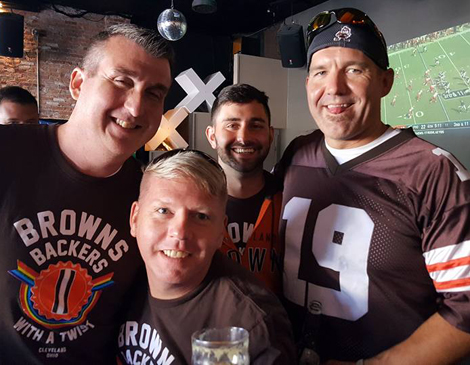 But their application was denied because new chapters must be at least 10 miles away from any existing chapters, and there were more than 10 Cleveland-based groups already in existence.

“When it got denied, we decided maybe we need to be a little bit more vocal about how our group is going to be unique from the other groups,” says Amstel. “We were the only LGBTQ inclusive club and that kind of set us apart.”

Within a couple weeks, they were able to get more than 10 Cleveland chapters to sign off on approving the new LGBTQ group, welcoming them to the Browns Backers with open arms.

It was an affirmation that anyone, no matter their race, sexuality, gender or creed, was welcome in the far-flung Dawg Pound.

Since its inception, Browns Backers with a Twist has grown to more than 120 members. The group hosts food drives and monthly fundraisers benefiting the community and cancer research.

They hope to eventually bring in past and present Browns players, as well as take bus trips to out-of-town games, all in an effort to bring the group closer together.

“We just want to include everyone,” says Amstel. “I feel like no matter who you are, we’re all Browns fans.”