The outside world views Chuck Kyle as a legendary high school football coach. Rightly so.

This fall marks Kyle’s 40th season as head coach of the St. Ignatius Wildcats and 51st as a coach in the program. He enters this season at 369-104-1 with 11 OHSAA state championships, 15 regional titles, 31 playoff appearances and 74 playoff victories. He has won three or four national titles, depending on how a points system is interpreted. His teams have been wildly successful despite playing the typically difficult schedule of an independent club.

Kyle, nicknamed “Chico,” is too humble even to suggest to those on the outside how he should be viewed. But he certainly would not object if his time at his alma mater (Class of 1969) is remembered for more than just football. He has been the Wildcats’ head track-and-field coach for almost 50 years. And as important to him as any coaching, Kyle has taught at the school since 1973, putting his English degree from John Carroll University to good use.

Last December, Kyle and St. Ignatius announced that the 2022-23 school year would be his finale as teacher and coach. We caught up with him to have a chat about his illustrious run. 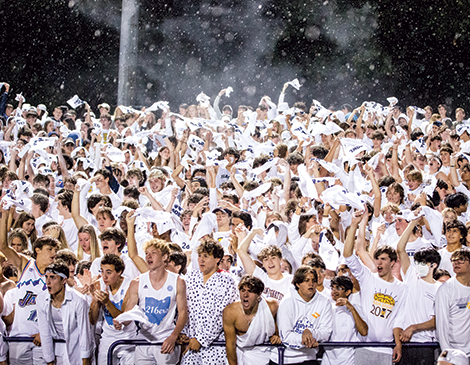 Cleveland Magazine: You were born in Hammond, Indiana — the youngest of four boys. How did you get to Northeast Ohio?
Chuck Kyle: Dad got a very good job offer at Republic Steel in Cleveland. We packed up, got on the toll road and drove to Cleveland. I was 5 years old.

CM: What made you finally decide that this is it for coaching and teaching?
CK: I think with anybody, you reach 71 years old and there are people saying, ‘When are you going to retire?’ I’ve had some wonderful young coaches, many of whom played at Ignatius. Time for them to move me out and to let them do it.

CM: You are a very young 71. Where do you get the energy?
CK: Teaching and coaching keep you young, keep you active. But I’ve always been active. My kindergarten teacher wrote in my report card that ‘Charles has an overabundance of energy.’ I guess she figured out I’m someone who has that type of motor. I’m motivated by things I find interesting.

CM: You have described your 50 years at St. Ignatius as a vocation, not a career. Explain.
CK: When you say vocation, it’s something that, to me, is more meaningful. I came out of college, and I wanted to teach English and do some coaching. I talked with a guy who coached college for years, and he explained, ‘Well, if you make the choice to go to college, you are going to bounce around. You’re going to live in a lot of different cities before you’re done.’ That wasn’t for me.

CM: Why English and not another subject?
CK: As a young boy, I remember the teacher giving us 20 math problems and I thought: For what am I doing this? I just wasn’t excited about it. I did enjoy reading. Then, when I got to John Carroll, I really enjoyed the English department. You could tell that the people in that department loved their subject. So I said, ‘This is what I want to do.’

CM: In English class, do you ever talk football, or draw a play next to a poem on the board?
CK: No. We don’t talk at all about football. We’re there to read and write. When the bell rings at the end of the day, only then am I going to teach football.

CM: When you became St. Ignatius head coach in 1983, did you set any goals?
CK: Well, I’m not going to sit here and tell you the goal was winning a state championship. That was beyond any thought. I just wanted to have a program with a great work ethic, where the players could look at me and the staff as sincere and trustworthy. We had turned independent before I took over. As an independent, you’re going to play some really good teams. So it was a matter of: How would we step up? The main way, I figured, was work ethic. We needed to work very hard, and we did. 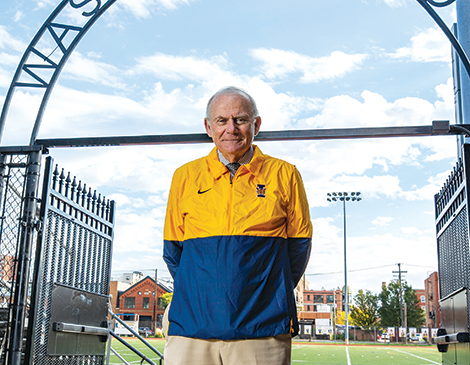 CM: How did you build St. Ignatius into a nationally recognized powerhouse?
CK: We were quite eager to throw the football. We were bold enough to throw it. We were in the state of Ohio, and let’s be honest: Woody Hayes had a strong influence. Three yards and a cloud of dust. Pound, pound, pound. And you knew about the potential for nasty weather late in the year, so people were saying that it’s going to cost you if you throw the ball around. But I remember thinking: We can do this. We can create a passing game that can work up here.

CM: How did it happen?
CK: We took a look at what Howard Schnellenberger was doing at the University of Miami. Our offensive coordinator, Nick Restifo, made a trip to Miami to see what they were doing. Defensively, we were solid. By ramping up the passing game, we became much more complete.

CM: How do you want to be remembered?
CK: I hope they say, ‘He was a very good English teacher. He helped me understand good literature, and he made me a better writer.’ Where coaching is concerned, I hope they say I set a good example. That I put their needs first. We are a program of attention to detail, integrity and good sportsmanship. We win with class, and we lose with class. And I always have been willing to look a player in the eyes and say, ‘I made a mistake.’

CM: What can we learn through sports?
CK: I sincerely believe that the football field, the track — any athletic venue — is a fabulous classroom. When I’m asked to speak to young coaches, I make sure to tell them: ‘When you are a coach, you are a teacher.’ Think about work ethic, teamwork, sacrifice, leadership. It’s all there in sports. Your teammates, 50 years after you play, they’re still your friends. They would do anything for you.

CM: You are legendary for your pregame and halftime speeches.
CK: I’ll tell you this: I never wrote any. Being an English teacher certainly helped me come up with ideas.

CM: Any stand outs?
CK: For what turned out to be the first state championship, I used a basic idea from Walt Whitman’s poem, “Song of Myself.’’ Celebrate yourself today. And, of course, Shakespeare has been used. A number of lines from Shakespeare have gotten in. I hope I haven’t broken any copyright laws.

CM: According to your players, you have refrained from salty language.
CK: I don’t mix in expletives. That’s not a teaching idea, and I hope I have a better vocabulary. If I went down that road, how could I look in the mirror?

CM: Have you needed to tell the players who didn’t win a state title, or go deep in the playoffs, that the season wasn’t a failure?
CK: Sure. You need to remind them that they are much better football players at the end of the season than they were just a few months before. And think of the progress made not just as a football player, but as a young man. Remember this, too: Sometimes, the breaks don’t go your way. That’s part of it. Take a look at the actual football, the way it’s designed. You throw the football in the air and let it hit the ground; no one knows exactly which way it will bounce. That’s the beauty of the game, but it also can be difficult to deal with. If it doesn’t bounce your way, you need to be mature enough to handle it.

CM: How do you help players process a loss on any given week?
CK: I always tell the kids: ‘You’ve got 24 hours. You’re going to think about it for 24 hours, and yeah, it’s going to hurt for 24 hours, but after that — that’s it. After 24 hours, I don’t want to talk about it. Let’s go to the next challenge.’

CM: Your wife, Pat, taught at St. Ignatius for 25 years before retiring. What was it like when you both were in the building?
CK: She taught art on the fifth floor; I taught English on the fourth floor. Once in a while we would bump into each other. It was kind of interesting when it happened. Pat is very supportive, but she’s looking forward to a fall without seven days a week doing football.

CM: Any regrets?
CK: None. If I got the opportunity to do it over again, I would do exactly what I did, to the letter. That’s how much I enjoyed it. And I hope to enjoy the rest of my life the way I have to this point. People might say, ‘Do you regret the outcome of some football games?’ Well, come on. Losses happen. When you lose, it can make you a better person, a better coach — because you end up realizing what you need to work on.

Will Cleveland Ever Develop Its Lakefront? New Plans Are a Step Closer

The pieces coming together for a bold, new vision for the lakefront.

Tom Haren is the Face of Marijuana Legalization in Ohio

As activists make another push for legalizing cannabis this November, the corporate lawyer is leading the charge.

Why the Ukrainian Easter egg means so much to one Cleveland doctor.