Their services include primary and preventive care, transgender and gender non-conforming care; specialized surgical care and consultations; behavioral and mental health and fertility and reproductive services 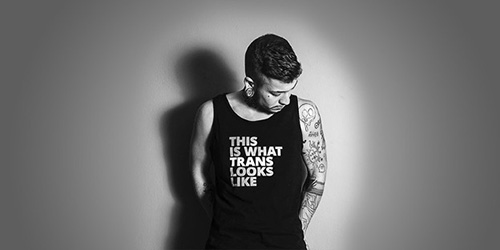 That’s what it says on Bobby Hillier's t-shirt during the photoshoot for University Hospitals.  He will tell you he spells his chosen name with a “y” for the male chromosome he’s missing. And he’ll also tell you he doesn’t mind driving a few hours from Toledo for University Hospitals’ gender care specialists, who will help him complete his identity and feel whole again.

Born with a girl’s body 23 years ago, Bobby always knew his gender just didn’t feel quite right. With big hands and broad shoulders, he first thought he was just a masculine female.

Ever since elementary school, I always felt not correct,” said Bobby, whose world opened up in high school when he discovered the LGBT community on the internet. He recognized his struggles in the transgender people he met online. “I saw a lot of people in the beginning of their transitions. It kind of looked like me. I saw I wasn’t comfortable in my skin for a reason – this wasn’t supposed to be my skin.”

The internet also helped Bobby find University Hospitals, where comprehensive LGBTQ & Gender Care Services address the medical, emotional and social needs of lesbian, gay, bisexual, transgender, queer, intersex and asexual patients, as well as those who are questioning and and/or exploring their identity. Bobby was delighted to discover he didn’t need to leave the state to complete his transition to the man he has always believed he was meant to be.

Finally, Bobby was going to find his own skin.

In his early teens, Bobby started dressing like a boy and cut his hair short, with his mother’s support. When he turned 18 and was able to begin hormone injections, a weekly subcutaneous shot he administered into his stomach tissue, he finally experienced changes in his body that felt comfortable. His voice deepened and he grew body hair.

“I was euphoric,” Bobby recalls. “This was everything I was waiting for my whole life.” Last year at 22, Bobby had a double mastectomy with Tobias Long, MD, a plastic surgeon on UH’s Gender Care team. Dr. Long removed Bobby’s breast tissue in a reconstructive procedure known in the transgender community as “top surgery.” Dr. Long was a perfect fit for this patient, who felt comfortable with this physician since the first consult over 18 months ago.

He made the appointment the very day he learned that a surgeon in Ohio could help him become a man. And when he woke up in post-op after the first stage in his transition was done, he felt positively elated.

“Being told what I’m not my whole life, and then seeing this progress, it was so rewarding,” says Bobby, adding he has benefited psychologically from finally witnessing these physical changes. “I can’t even explain the weight it lifted off my chest.”

Eagerly awaiting the next chapter

Later this year, Bobby will undergo a complete hysterectomy. A few months after that surgery, his surgeons plan to perform the first of three phases of “bottom surgery,” when they begin constructing a functioning penis. The entire series of surgeries will take 12-15 months.

In the first surgery, Dr. Long and reconstructive urologist Shubham Gupta, MD, will use tissue from Bobby’s forearm to construct the phallus and connect the organ to nerves and arteries in the groin. Following three to six months of healing, the patient can undergo the second stage of surgeries, in which the opening of the vagina is closed, labia tissue is pulled forward to form the scrotum and testicular implants help form the male anatomy. Patients may opt for a third surgery, in which erectile implants make achieving an erection more pleasurable.

Bobby looks forward to the transitions ahead as he forges on in this new phase of life as a man.

“Being a trans person in Ohio there’s a lot of backlash, and previously I’d had a lot of issues with the medical community not understanding my needs,” Bobby says. “University Hospitals has treated me with the utmost respect and caring. Their bedside manner is amazing, and everything I’ve needed is there.

“A lot of people feel like they don’t have any options, and I would like them to know that they do.”