Proton therapy is one of the most advanced cancer-killing radiation therapy technologies available today. And University Hospitals is one of only 24 centers nationwide – as well as the first in Ohio – to offer this leading-edge treatment option to cancer patients.

“The Radiation Oncology Department at UH Seidman Cancer Center has state-of-the-art capabilities. And now we have proton therapy, which was one of the only treatment modalities that we were lacking,” said David Mansur, MD, Division Chief, Radiation Oncology, UH Rainbow Babies & Children’s Hospital, who directs UH’s new $30 million Proton Therapy Center.

Both proton therapy and traditional radiation treat tumors in the same way: by either killing cancer cells or inhibiting their growth. But in traditional radiation therapy, X-ray – or photon beams – enter the body, depositing significant energy in healthy tissue before and after passing through the tumor. The photons’ lack of charge and mass means most of their energy is deposited in healthy tissue near the body's surface, as well as in areas of the body beyond the cancer site. This can cause lasting side effects – and even second cancers later in life.

Proton beams, on the other hand, travel to a specific depth and then stop, rather than continuing through the body. Because protons are larger and heavier charged particles that deposit radiation dose in a more targeted manner, radiation oncologists can direct a proportionately higher dose to the tumor, and relatively less in surrounding normal tissues. By changing the energy of the proton beam, they can tailor the dose to the specific depth and shape of the tumor, while greatly reducing the impact on surrounding healthy tissue.

“Unlike X-ray beams that penetrate through the patient, a proton beam penetrates to a depth that’s proportional to its energy and then it stops. This eliminates the unnecessary exit dose and therefore allows for a reduced dose to uninvolved, healthy tissues,” Dr. Mansur explained.

Proton beam therapy won’t replace all traditional radiation therapy, but it will be an option for certain people.  Most notably, the use of protons is beneficial for the treatment of some cancers in children, teens and young adults, who are more prone to short and long-term complications from radiation.

“There are several benefits to the delivery of radiation treatment with protons rather than photons for certain types of cancer, and we believe that this represents the next important advancement in radiation therapy. We are very excited to bring this leading-edge technology to Ohio,” said Nathan Levitan, MD, President, UH Seidman Cancer Center. “We have made this significant investment in keeping with our commitment to bring the most advanced cancer-fighting treatments and technology to our community and to the country as a national leader in cancer care.”

Cancer is the leading medical cause of death among teens and young adults. “These patients are at greatest risk of long-term effects from radiation treatment, such as cognitive problems and second cancers,” Dr. Mansur explained. “When you cure a 10-year-old, the hope is that you will have 70 to 80 years of life expectancy. It’s not magic, but if you can limit the late effects of treatment, it’s worth it.”

Most often, proton therapy is used for tumors of the brain, base of skull, head, neck, lungs and spine, among others. This treatment approach offers particular benefits for children and young adults with cancer, as it reduces radiation exposure to surrounding tissues, and therefore should reduce the long-term risks of radiation exposure – including neurocognitive impairment and treatment-induced secondary cancers.

“I tell my patients that nerves don’t grow back the way skin does if you get a cut on your finger,” said Krystal Tomei, MD, Chief of Pediatric Neurosurgery, UH Rainbow Babies & Children’s. “The special types of brain tissue, like the brain stem, are things we want to protect as much as we can because once nerves get injured, we’re not always able to get that function back. Proton therapy is able to target a very small area in a way that does not hurt the surrounding tissue that we’re trying to protect.”

“Most proton centers are isolated from the nearest children’s hospital,” Dr. Mansur said. “The goal was to have it physically connected to Rainbow rather than several miles away or even across the street. This is one of the only places in the world where we’ve achieved this type of proximity, and that stands to benefit the pediatric and young adult population that Rainbow’s already nationally and internationally known for treating.”

This proximity to Angie’s Institute allows pediatric patients and families easy access to the treatment they need. Previously, families were uprooted from home and traveled hundreds of miles out of state to access proton therapy at faraway centers – with the typical treatment regime lasting four to six weeks.

A team of physician experts from UH Seidman Cancer Center and UH Rainbow Babies & Children’s will closely collaborate on the development of pediatric and adult clinical trials for novel applications of proton therapy.

With the addition of proton therapy, UH Seidman Cancer Center has joined an elite few in the nation to offer every radiation therapy technology available to fight cancer, including Synergy-S Hexapod, Cyberknife, and Perfexion Gamma Knife. Photon beam therapy currently is the most common form of radiation therapy and remains the standard of care for most adult cancer radiotherapy. 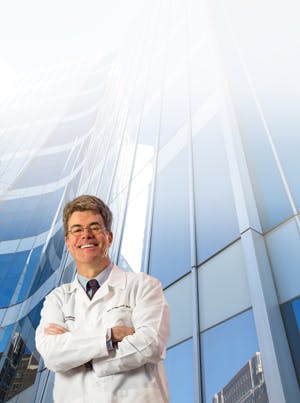