As a sophomore at Kent State in 2016, Anne Catherine Skoch was looking for a fun way to add a little pizzazz to her drab dorm room. She wanted something that reminded her of home. So, she created her own touch of Cleveland by designing and sewing stark black-and-white pillows featuring the city’s skyline.

“I thought it'd be fun to capture my favorite cities in some pillows to match my black-and-white aesthetic of my dorm room,” says Skoch, the Mentor-based designer and owner of Anne Cate. “A few Facebook post shares later we realized it had potential.”

While Skoch tapped into her lessons as a fashion and merchandising major, she’d started developing her skills at a sewing machine, with crafts and with design long before she was even in high school.

“I've been a creative entrepreneur since I was 13 and got my first sewing machine then and really just loved to make things and I would sell them at craft shows,” says Skoch. “And so we started testing them out on Etsy and within a couple of months we are selling them like crazy.” 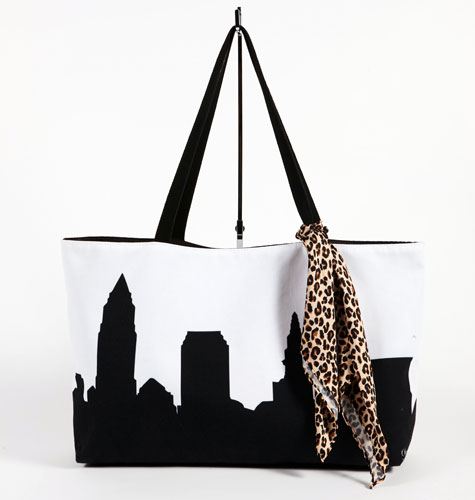 Today, Skoch’s Anne Cate line has expanded to feature purses, pillows and handbags with skylines of more than 125 cities, including Seattle, Chicago, Columbus and New York. She’s been featured at maker fairs such as The Cleveland Flea as well as in more than 80 museums, boutiques and department stores across the country. She’s even made products for Hulu and Key Bank’s corporate office.

“I wanted this brand to be simplistic, classic and elegant, but still significant and meaningful,” says Skoch. “I actually have never been called Anne Cate in my entire life. I go by Annie to all of my family and friends, but you know, we came up with the name Anne Cate and I loved it because it embodied my style, which is of course simplistic and classic.”

But Skoch’s love of Cleveland goes way beyond just a design element. She’s also recently dedicated herself to support the community she celebrates with a new donation program running through April 5.

“I wanted to think how we could help out in the best way as a small purse company,” says Skoch. “It’s just a unique way for us to have our customers help out the Cleveland community in this trying time.”

Her charitable actions also come amidst the economic fallout of the COVID-19 pandemic. As stores close and clients pull orders, the small purse manufacturer has been forced to lay off her manufacturing team, leave investments in the form of materials on the shelf and is now sewing all of the purses by-hand herself.

Though Skoch has some inventory built-up, she has about 1,000 purses in her queue that she hasn’t yet been able to get done.

Luckily, her understanding customers have rallied around the products and the maker they adore.

“We're lucky because some of these clients are very understanding and are struggling as well, and all of these deadlines have been pushed further out,” says Skoch. “So it truly is a community effort and we're very grateful for everyone who has thought of us.” 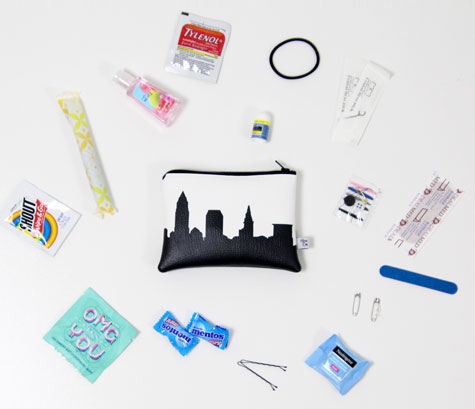 One Item We Love: If one thing comes from all of this, we’re likely going to up our preparedness. But being prepared isn’t antonymous to being fashionable. Case in point, Anne Cate’s The Emergency Kit ($22) is a small bag that keeps you stocked in style. Featuring 20 life essentials, including chapstick, a tampon, Tylenol, floss, earring backs, and, of course, hand sanitizer, the very timely bag was ironically created months ago. Obviously, Skoch didn’t know it would be released at the height of a pandemic, but it’s now a top-seller. “We have a lot of customers who are sending it to family members who are quarantined in different cities or stuck at home and just want to send a fun little package,” says Skoch.
Share this story: