Soap didn’t seem too exciting to best friends Patrick Groghan and Yu Zhang until they found a bar they loved on Etsy and decided to try their hand at making their own. Over two years, the amateur scientists discovered a whole world of cool techniques and formulas that evolved into their own Hart + Hawthorn line, which launched in April 2014. “It was just so exciting for us to be experimenting and mixing chemicals for everyday products like soap,” says Zhang. The line now includes handcrafted candles and beard oils. “We were enthralled by soap,” says Groghan. “It was not something either of us had ever done before, but we knew it was something we could achieve.”

Beaker Heaven: The chemistry lovers geeked out over the process of soap and candle making in their small Cuyahoga Falls basement laboratory. The process varies in volumes, measurements, cooking temperature and order of mixing, says Groghan. “It was clear how much science and math was involved in it,” he adds.

Beard Love: Hart + Hawthorn’s beard oils ($14) are made from a variety of essential oils including apricot kernel oil, jojoba and argon. Each one comes in vintage-style 2-ounce glass bottles. But the product, which comes in eight scents such as rosewood and vanilla, isn’t just for men. Anyone can use it to give hair extra condition. “Surprisingly, neither of us have beards,” says Zhang. “I can’t grow facial hair for the life of me, but I use it as a hair tonic,” says Zhang.

Happy Accidents: New scents are born through a lot of trial and error. “Nine times out of 10, they smell really bad, but then you get that one,” says Zhang. “We’ll mix a bunch of scents in different ratios until we find one we like,” says Groghan. Take their best-selling candle, Orange and Pine ($16). Groghan thought he was blending more orange fragrance but instead picked up a bottle of pine. The result? A beautiful rustic scent with a hint of citrus.

Oil Business: The small-batch company decided to sell only cruelty-free and eco-friendly products that use coconut oil instead of the more traditional palm oil. “[Palm oil] is done in a slash and burn technique. It takes a lot of water and resources to grow, cut down and regrow it,” explain Groghan. “It’s a great oil for soap. A lot of people will rave about it, but we weren’t going to use it.” 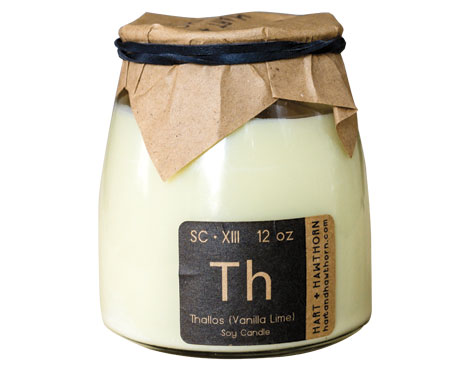 Named after the goddess of spring buds, the Vanilla Lime Thallos Candle ($16) blends classic vanilla notes with a hint of citrus. The 12-ounce candle burns for 60 hours.
Share this story: