Put the Sea-Doo in storage. Sometimes you just need to sloooooooow down. Way down. That’s why you should make the hour and a half drive to the Ohio-Pennsylvania border for Pymatuning Lake. With boat engines limited to 20 horsepower, Pymatuning is spared growling speedsters or revving Jet Skis. Instead, time at Pymatuning is spent lolling on pontoon boats, waiting for a gentle tug on your fishing line or sipping wine. It’s a retreat in the truest sense  — a lake where chilling out and withdrawing from the hustle and bustle is the way of life.

The Water: When fishermen dream of a perfect catch, they picture Pymatuning. The lake is teeming with crappie, bluegill, channel catfish and carp. Every year the lake is stocked with 653,000 walleye too. Last year, a Pennsylvania Fish & Boat Commission survey had its highest catch rate for muskie there — ever. To snag a piece of that action, it’s easy to get into the water from the Jamestown, Pennsylvania, boat ramp, where a 14-foot boat and motor can be rented for up to 12 hours ($25.75-$83). But one of the lake’s best fishing spots is actually on land. Just off the long, narrow causeway of state Route 85, the turnoff is so sudden it looks like you might careen into the drink. But once you pull off the road, you won’t mind getting wet. Just climb out onto the rocks beside the lapping waves, cast off your troubles and wait for that telltale nibble.

The Land: You’ve never seen fish want bread more. On Pymatuning’s eastern edge, thousands and thousands of carp cram into the narrow spillway that feeds into the lake. More than 400,000 tourists pass through annually, as they have since the 1930s, and toss in hunks of white bread. The fish writhe and splash over each other, making sucking noises as they compete for starchy morsels. It’s weirdly, wonderfully gross, and once you see it you can’t look away. “It’s tough for us, as a natural resource manager, that this still goes on in 2018,” says Pennsylvania park manager Dan Bickel. “At every other state park, we tell people, ‘Don’t feed wildlife.’ But it’s a historical thing.” 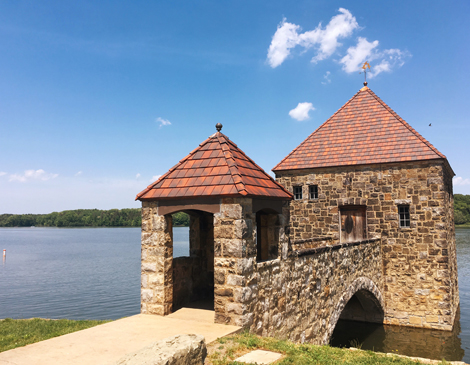 Where to Stay: After a long day relaxing on the water, roughing it probably sounds about as appealing as a sunburn. Luckily, in one of Pymatuning State Park’s 56 cabins, you won’t have to. Each cabin is equipped with furniture, plumbing and appliances. And unlike on the Pennsylvania side of Pymatuning, the Ohio park throws in dishes, linens and bedspreads. Starting at $65 per night for a four-sleeper, the cabins also have a playground for the kids, a beach and a boat launch.

Where to Eat: With a tasting room in a renovated barn, Lago Winery is an effortlessly rustic spot to while away the hours. On East Lake Road, so close to the lake you can still feel the breezes drifting through the glass-free windows, the tasting room sits on a 140-acre farm. In the barn’s shade, the chilled wine, such as a sweet, slightly tart and pleasantly iced blend called Running Naked Blush ($6 glass), goes down easy.

Expert Take: Relive those Eagle Scout glory days by taking the old bow out to the Pymatuning State Park archery range, where there are six targets ranging from 20 to 40 yards.