After months hiding from winter weather (and, let’s be honest, a pretty lousy spring), we’re ready to get our summer vacations rolling. But if you’re not ready to jet off to some tropical island, Ohio holds enough must-see stuff to fill your Summer 2020 scrapbook. Depending on how far you’re willing to drive, here are four places we can’t wait to check out. 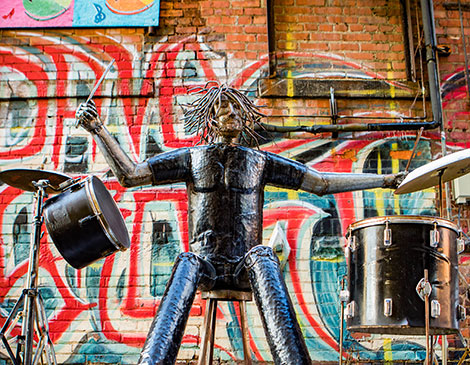 David Grohl Alley, Warren
Travel time from downtown Cleveland: 1 hour, 8 minutes
Give yourself bonus points if you knew Nirvana drummer and Foo Fighters frontman Dave Grohl is from (drumroll): Warren. Grohl was born in the Trumbull County city and lived there until he was 3 years old. In 2009, residents and artists in Warren decided to honor their native rocker, renaming a downtown alleyway “David Grohl Alley,” and adorning it with 900-pound drumsticks and a dozen murals, one of which is on the back of Greg Bartholomew’s All American Comics. “[Grohl] is one of the godfathers of grunge music,” Bartholomew says. “What’s grungier than an alley?” Between South Park Avenue and Main Avenue, Warren 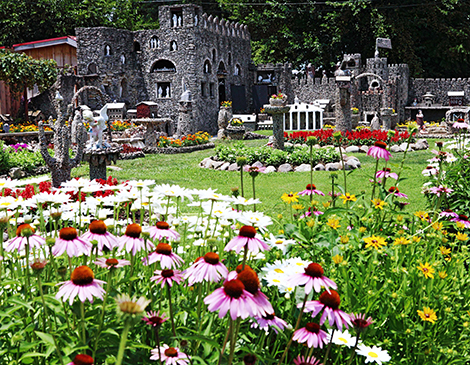 Hartman Rock Garden, Springfield
Travel time from downtown Cleveland: 2 hours, 53 minutes
Whether you classify it as folk art or roadside Americana, Hartman Rock Garden inspires pure fascination. Built by Harry Hartman in his backyard between 1932 and 1939, the site holds more than 50 stone structures, including miniature replicas of Noah’s Ark and Betsy Ross’ house. The abstract Tree of Life sculpture combines themes of patriotism, religion and education that extend throughout the garden. “It’s not modeled on a photo he has,” says Kevin Rose, the garden’s curator. “It’s entirely from his mind. To me, that’s when the garden starts to become something special.” 1905 Russell Ave., Springfield, hartmanrockgarden.org 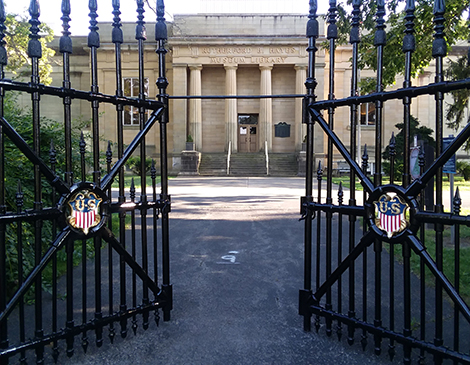 Rutherford B. Hayes Presidential Library & Museums at Spiegel Grove, Fremont
Travel time from downtown Cleveland: 1 hour, 29 minutes
The 19th president’s historic home and museum are something to see, but its 25-acre Spiegel Grove setting holds its own wonders. While walking the path, part of which was a well-traveled Native American trail before the estate was built, pay your respects at Hayes’ tomb, see five sets of gates originally from the White House and marvel at more than 100 types of trees. “You can really hit a lot of different points of history just walking through this area,” says education coordinator Joan Eardly. Spiegel Grove, Fremont, 419-332-2081, rbhayes.org 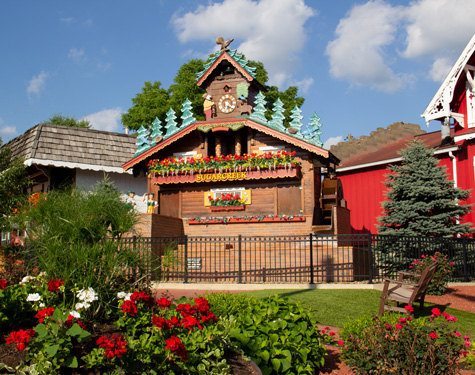 World’s Largest Cuckoo Clock, Sugarcreek
Travel time from downtown Cleveland: 1 hour, 35 minutes
One of the most worthwhile stops between Canton and Marietta on Interstate 77 is Sugarcreek, Ohio’s own Little Switzerland, known for its museum and alpine-themed shops. But make sure you visit the corner of North Broadway and West Main streets, where every half-hour, the 24-foot-tall cuckoo clock comes to life with music, a robotic five-piece band and a dancing couple. “It’s pretty neat to have a clock like that,” says Clayton Weller, a city councilman and former mayor, who helped bring the 1972-built clock to Sugarcreek from nearby Wilmot in 2010. “People stop and dance to it and jump up and down. It’s nice.” 100 N. Broadway St., Sugarcreek

Just four hours from Cleveland, the Lake House on Canandaigua was voted one of the top 30 hotels in the world. We set out to discover why.

Located just three hours from Cleveland, this rugged landscape is worth the drive and the hike.