An old farmhouse vibe — that’s what it had to be. Even though Sarah Taylor’s clients were building a new house in Chagrin Falls, they knew they wanted the inside to feel lived-in and welcoming. The owners gave Taylor full control and she went to work designing a floor plan that worked best for them — including a spacious, modern-yet-rustic kitchen. “I used reclaimed wood for the floors throughout and on the ceilings, then added a few wooden touches like the hood in the kitchen,” says the owner of Taylor Design Studio. “But other than that, each room has its own style with the wood tying it all together.”

Taylor took six months to get the three-bedroom, three-and-a-half-bathroom home just right. She’d tweak things as she went — she had to move one of the kitchen walls back a few feet to optimize the storage — and took her creativity to the max — there’s a chandelier off of the kitchen and a floor-to-ceiling marble bathroom upstairs. “They wanted to keep it very warm and inviting, but also eclectic with things like the brick walls. Any wall that is exterior in the home we made brick,” she says. “It was a lot of pushing and pulling of different materials and contrasts to make it cohesive and make it all speak the same language.” 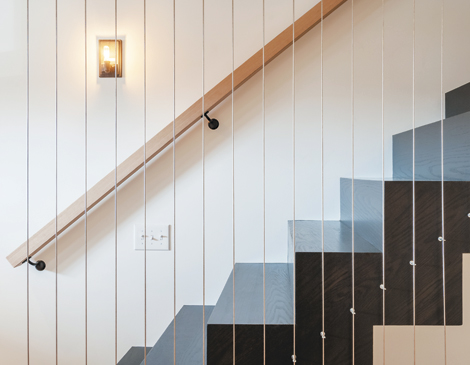 The Staircase: The statement moment of the foyer, the open black staircase features silver cables running from floor to ceiling in place of a railing. “I still wanted people to be able to view the design of the staircase without interrupting it with a railing,” Taylor says. “I essentially created a wall out of wire because the view from down in the basement all the way up was just too cool to distract from.” 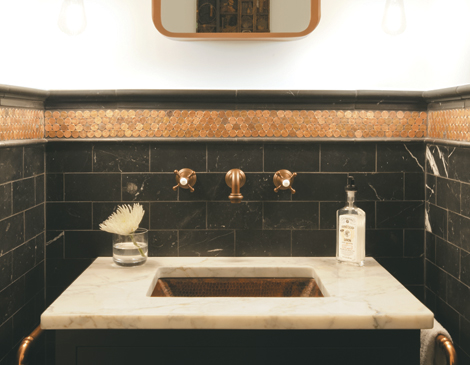 The Guest Bath: After seeing a floor made of pennies, the owner begged Taylor to include the idea in one of the bathrooms. She  covered the floor with pennies, plus added a border of change around the walls. Copper accents around the sink really make the space pop. “That was something [the owner] really wanted,” Taylor laughs. “And all of the pennies were placed heads-up except for five of them, so then it also makes for a little entertainment to try to find the pennies that were heads-down.” 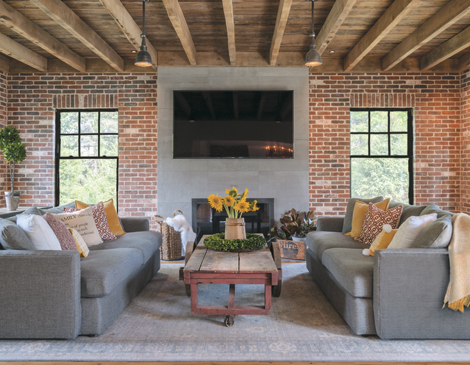 The Fireplace: Taylor used the process of elimination to choose the material for the fireplace. Stone would have clashed with the brick and Taylor didn’t want to repeat materials. “I ended up using concrete tiles to build this massive fireplace,” Taylor says. “Everything in the room is so noisy, the fireplace becomes the focal point because it is the only thing that is clean and quiet.”