Chris and Kathy Snyder build houses like most people buy a new pair of shoes — often and without angst.

“My husband loves to build things,” Kathy says with a laugh.

Since getting married in 1986, they’ve built five homes. They also bought a vacation home in Maine, which they now rent. “It was impossible to get there,” Kathy says, citing the busy schedule that comes with having four children, including one involved in competitive cheerleading.

So they began to search for options within driving distance. They found exactly what they were looking for in a sprawling double lot in the Cliffs, a gated neighborhood on Catawba Island. Once they found it, they knew it was the perfect place for their new summer home. 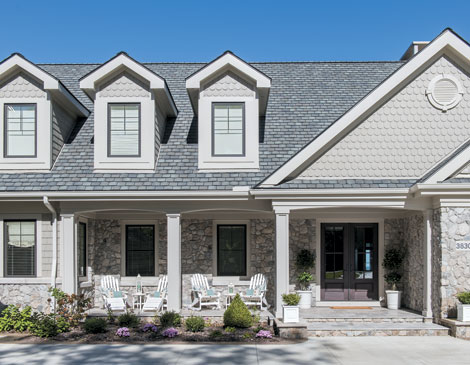 Instead of spending the next year worrying about every last detail, they focused on finding the right architect-and-designer team — Steve Schill of Schill Architects and Libby Palmieri of House of L — and left it up to them.

The Snyders did give Schill and Palmieri some direction for the 2016-built home. Chris, a private equity investor, wanted to capture the rustic look found in the lodges and cabins of Colorado, whereas Kathy preferred a clean, nautical style. 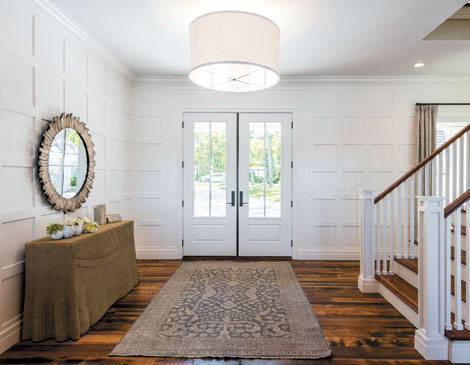 While those ambitions may seem somewhat contradictory, the design team found they could marry the two by finding the perfect anchor for the house — planks made from eight wood varieties reclaimed from Ohio barns. They were used as flooring in the living areas throughout the home.

“The rest of the millwork in the house is more polished,” Palmieri says, which creates a balance with the rustic flooring. The fireplace mantel, for example, is painted a pristine white and flanked by two built-in cabinets. White shiplap is used generously throughout the house, including on the kitchen ceiling and in the mudroom. And the foyer walls are decked out in Shaker-style wainscoting. 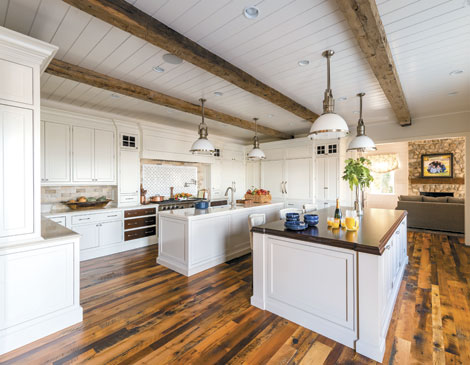 The nucleus of the home is the kitchen, which has white inset Shaker cabinets and quartz countertops but also boasts a hidden prep area accessed by a secret door that functions as a pantry. There are two large islands — one for food prep and one with seating. One touch — which Schill makes a point of incorporating into all of the waterfront homes he designs — is that the second island faces the lake, not the kitchen.

“People want to look out at the lake,” he says, “not the kitchen.”

The kitchen opens up on one side into a spacious great room. Off on the other side is the coziest space in the house — a hearth room where a family portrait hangs above the fireplace and an entertainment center concealed behind sliding reclaimed barn doors.

The private quarters of the house are equally interesting. The first-floor master bath features a dramatic tiled path leading to the soaking tub. Built-in cabinetry houses a warming drawer for towels and a fridge drawer for cool drinks. The glass shower overlooks the water, yet retains privacy due to the width of the lot. 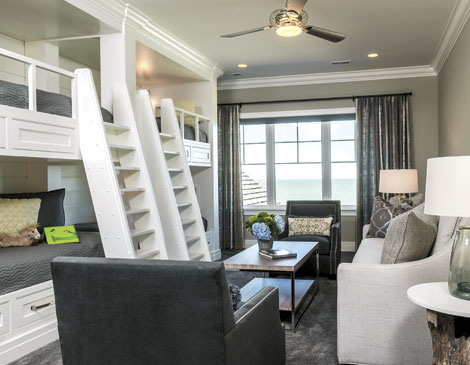 Upstairs, each of the four children has his or her own bedroom and bath, ranging from the sweet lilac walls and white furniture in 12-year-old Claire’s room to the dark walls and modern furnishings in one son’s bedroom. A fifth extra bedroom has four built-in bunk beds where it’s easy to envision future grandchildren spending the night. (The Snyders’ oldest son is getting married this year.)

To capitalize on the view, Schill took advantage of the wide lot and designed the entire 9,000-square-foot home to be 140 feet wide. Every room in the house — including the laundry room — looks out on the lake.

The Snyder family spent their first weekend in the home last Fourth of July. (But they weren’t the first occupants. An empty bird’s nest was discovered nestled in the wood beams in the study when the home was being cleaned just before move-in day. The family decided it could stay.) 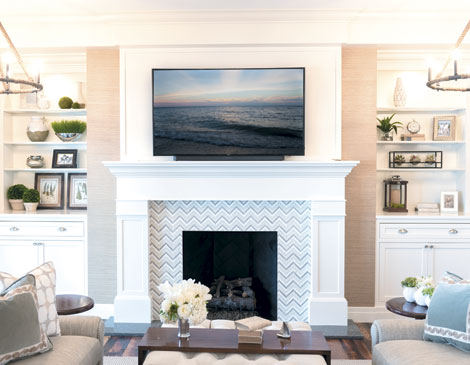 It’s not just the house they enjoy, it’s the lifestyle. The three boys — all in their early 20s — can walk from the house to the Miller Boat Line, where they catch the ferry to Put-in-Bay. The youngest child — Claire — has a tandem bike she and a friend ride to get ice cream from the nearby Brown’s Dairy Dock.

Instead, you’ll find them sitting on their back patio together in the morning, a cup of coffee in their hands and all of Lake Erie before them.

“I’m really excited to use it for the whole entire summer,” Kathy says. “We just love everything about the house.” 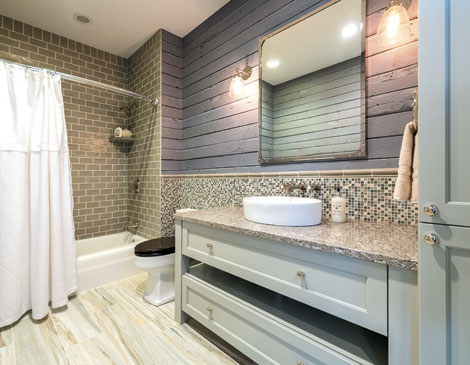 Get the Look
The first thing you notice in the coastal-looking bathroom upstairs is the dark wood planks on the wall. Touch it, however, and you realize it’s actually digitally printed wallpaper from NLXL that replicates the texture and look of driftwood. It’s one of the details that designer Libby Palmieri used to bring a bit of “cheekiness” into the home. “It creates a bit of a flutter in someone and provokes them,” she says. “It’s the reaction of seeing something unexpected that I like.”