Kelly Crotty hasn’t always had a green thumb. But after that first pot of chives she planted on a whim in her 20s started growing in the spring, she was hooked. “Then I moved into my house where I started growing my own food and experimenting with different flowers and things like that,” says Crotty. “The passion definitely grew from there.”

Today, the West Park resident is a gardening consultant for her business Kelly’s Creations in the CLE. Founded in 2017, the company creates custom plans for gardens, pollinator-attracting flower beds and landscaping, and offers coaching on plant maintenance and care.

Last year, Crotty even took the next step, becoming a certified garden consultant through Gardenary.com, an online learning platform for gardening know-how, where she also works as a project manager.

Unlike a lot of gardening and landscaping companies, Kelly’s Creations in the CLE leans into planting in smaller, city spaces with a focus on Crotty’s true passion: kitchen gardens bursting with herbs and veggies.

“So many people in an urban setting have no idea what’s capable even on a balcony of their condo with a couple of planter boxes,” she says. “Just because you live in an urban environment doesn’t mean that you can’t have fresh ingredients right outside your door.”

Another point she’s passionate about is educating people that the growing season in Cleveland is longer than we think. While she harvests cold-hardy produce like kale from her garden year-round, even less knowledgeable gardeners can expect to garden through three seasons, making that kitchen garden well worth it.

“I teach people you’re not really born with a green thumb or a black one,” she says. “You just need to realize the potential that you have and to understand the process behind it.” 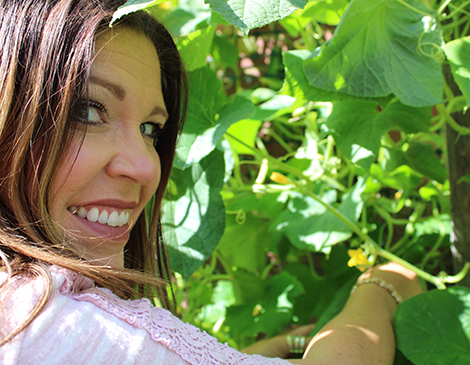 Outside Activity
You don’t have to wait until warmer temps to get your yard summer ready. Here’s what you can tackle now.

Take inventory of your garden supplies
Make sure you have fertilizer, soil additives and all the supplies you need ahead of gardening season. “Look at what’s left over from last year,” says Kelly Crotty, owner of Kelly’s Creations in the CLE. “If you have pruners and tools, clean them up and sharpen them to get them ready for the next season.”

Add compost to your garden
Spring is the time to add a nutrient-rich boost to your garden beds. “It’s a great time to add a two-inch layer of fresh compost,” Crotty says. If you don’t compost at home, she recommends supporting your local gardening center or Cleveland companies, including her personal favorites Tilth Soil from Rust Belt Riders or Everbrew from Ever Arbor.

Prune shrubs and trees
It’s safe in March to prune weak or damaged limbs on trees, as well as rose bushes and panicle hydrangeas. “You want to wait to prune any of your spring flowering trees and shrubs until after they bloom,” she says. Otherwise, you’re cutting off the newly formed flowers.

Bonus Tip: While it’s tempting to clean out all the dead foliage and leaves from your garden beds now, it’s best to wait. “So many insects and pollinators are actually either hunkering down or they’ve nested in those spots,” Crotty explains. “My rule of thumb is to wait until the daytime temperatures are consistently above 50 degrees.” 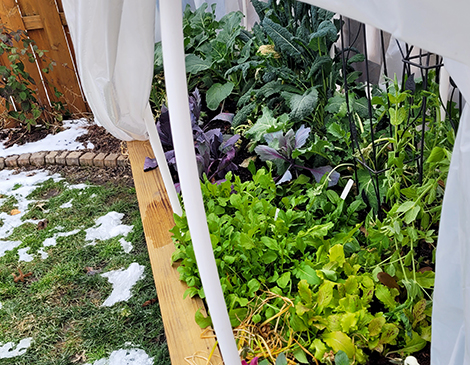 Plan Ahead
Here’s three projects you can start working on right now.

Build a raised bed garden
If gardening space is a concern, clear some ground in your yard to install raised beds. With basic DIY skills, you can build this yourself, says Crotty (who offers a free download for plans on her website). “A very basic 4-by-4-by-1 raised bed is probably one of the best ways to start out,” she says. “It’s not too big and overwhelming and it’s easily accessible from
all four corners.”

Grow herbs
New to growing food? Crotty suggests starting with a hard-to-kill herb garden. Start them indoors in planters, ideally in a sunny southern-facing window, and move them outside once things warm up. “Even when you think you don’t have a green thumb, herbs can take a pretty tough beating and still provide for you,” she says.

Create an outdoor planter
You can start planting as soon as plants arrive at local garden centers, which is typically around the first few weeks of March. To bring some color to a yard or porch, grab a basket, fill it with potting soil 3/4 of the way and add a slow-release fertilizer. “After buying everything, tuck the plants in to where you want to place them. Fill with more soil until it’s lightly compacted in,” says Crotty. Some of her favorite hearty plants are spring bulbs such as daffodils, tulips and hyacinth.

From learning where and how to look for art to where to place it, Gent has tips for novices and experts alike.

This Victorian Lakewood Home Is a Trip Back in Time

3 Things to Know About Evergreen Fog, Sherwin-Williams' Color of the Year

Evergreen Fog gets in on the national trend of interesting neutrals gaining ground.