Siaara Freeman has spent almost half her life building up to her latest poetry book release.

Freeman’s Urbanshee follows dozens of other poetry publications in journals like The Offing, BOAAT and Josephine Quarterly. In Cleveland, Freeman might be known for her poems — or for her role in poetry slam teams — or for her plays performed with Cleveland Public Theatre — or for her work as the curriculum development manager at the Center for Arts-Inspired Learning.

But for the last decade and a half, Freeman, now 32, has compiled her coming-of-age story in the form of poetry. Urbanshee looks at her own upbringing in Cleveland, near the intersection of St. Clair and East 93rd Street. Poems explore Freeman’s developing identity, her communities and the people in them, and her relationship to her father who was killed in 2007.

In the collection’s first piece “On Glorification,” Freeman writes:

“When people ask me, How can you
love a hood that took yo daddy,
wicked fairy that I am, I read them
a new world where this poem is the sun.”

“Cleveland is such a big part of my work. It’s inherent to me, just like my Blackness and my queerness,” Freeman says. “Cleveland is the place, but it’s my version of Cleveland. My perspective. So much of my perspective is magic and whimsy and fairytale.”

Freeman grounds many of Urbanshee’s 80 poems in mythology, going back to the two-pronged title of the book: “urban,” and “banshee,” an Irish female spirit that warns of future death.

“This book is not just about death,” Freeman says. “This book is also about life. I wanted people to know how I was mourning, and how I continued to live past death. So much of this is the magic of the dead still being there.”

She adds: “If you know so much darkness, the chances are you run toward the light faster.”

Growing up reading mythological stories and works by Virginia Hamilton, Zora Neale Hurston and Toni Morrison, Freeman discovered her love of writing as a child. She got involved with theater programs as a kid and says she wrote her first poem when she was seven years old.

“The first time I wrote a poem and wanted to show it to my grandmother, it was a joyous poem,” Freeman says. “However I navigate my poetry, I like to go back to that moment where the first poem I ever wrote made me smile, and made my grandmother smile.”

Freeman kept writing through the Power of the Pen program in middle school. As a student at Charles F. Brush High School, she discovered a love of spoken word performance through competitions in the national Brave New Voices competition.

After high school, Freeman transferred to local adult slam teams and also performed solo, speaking around the country and internationally in locations like Norway and Costa Rica. She was a member of two teams that made it to the National Poetry Slam semifinals. Her performances gained an audience through Button Poetry’s video series, where some of Freeman’s poems took off, like “The Drug Dealer’s Daughter,” which has amassed nearly a million views on YouTube.

As her slam performances gained traction, Freeman shifted some of her work from the stage to the page. After studying other authors’ writing and poetry textbooks, she submitted written poems to journals and successfully landed pieces in prominent publications. Then, Freeman started piecing together Urbanshee, eyeing a publication deal with Button Poetry through a contest.

After some fits and starts, that publication deal for Freeman’s 145-page book finally came through during the coronavirus pandemic.

Within its pages, Urbanshee explores ghostly haunts, friends’ deaths, childhood relationships and medical events, all stacked with cultural commentary on everything from Pokemon cards to Kill Bill to Kylie Jenner. Many of her poems return to her father, some written in the time that followed his death.

After thanking God, Freeman lists her father next in Urbanshee’s acknowledgments page:

“For my DaddyO, Gregory Rodgers, I’ve been writing this book since the moment you were murdered, I gave this book the same amount of years I had with you,” Freeman writes. “I wanted more than Cleveland to know your name, more than me to feel your impact & everyone to see our endless & unwavering love.”

After Urbanshee’s release, Freeman says she’s already at work on two more books: a young adult novel about the seven deadly sins and a project centered around cartoons and race. 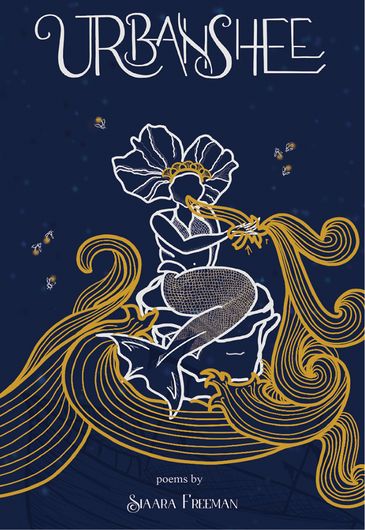