It’s been a few decades since A Christmas Story arrived, and the movie remains as relevant as ever, at least here in Cleveland. This year, it gains even more relevance with the release of A Christmas Story: Christmas, featuring many of the film’s original cast members, including Peter Billingsley as main character Ralphie Parker.

In the first movie, Ralphie is busy chasing after the ultimate Christmas gift: an official, Red Ryder, Carbine Action, 200-shot Range Model air rifle with a compass in the stock and this thing that tells time.

In the sequel, Ralphie has grown up and has a family of his own — and he’s aiming to make the holiday as special as possible for his children.

Billingsley was excited to pick up the story. The actor, a certified holiday icon, is luckily a big fan of Christmas — so much so that he’s also kicking off a new podcast called A Cinematic Journey with A Christmas Story: Christmas writer and producer Nick Schenk. The first collection of episodes will be centered around Christmas movies, and they’ll air this holiday season, Billingsley says.

We caught up with Billingsley to hear about the filming process for the new sequel, what to expect in the new story and, of course, his memories of filming the first movie in Cleveland back in the ‘80s.

Cleveland Magazine: What’s it like to be playing Ralphie Parker again?

Peter Billingsley: It’s hard to believe it’s been 39 years. I’m kind of in a unique position; I don’t know that there are a lot of characters people have been able to reprise after that long. It’s great. We had so many of the right pieces come together. A lot of people are asking me, “Why now?” I think the things that were really important for us were to make sure that we had the resources, had the cast, to really be able to recreate the world that audiences really feel so attached to and love so much. Obviously, the original house, which is in Cleveland, we needed to be able to recreate that house and really the whole street. We were able to do that, thanks to partnerships with Warner Bros. and with Legendary, and it’s been a pretty surreal experience.

I will say this about the character: Ralphie’s a pretty interesting one, that he has some very adult qualities. He was pretty relentless in his pursuit of that. He didn’t really let anything deter him. He’s got Santa Claus kicking him in the face and his mom saying he’s going to shoot his eye out, but he just really stays on his path. I like that, as an adult character, and I like that he’s a bit of a dreamer. He’s always been someone who sort of fantasizes his life in a better place than it is currently, and that’s something I think we can all certainly relate to. At least I can. 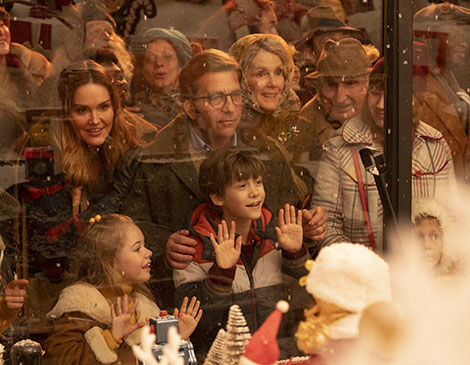 You brought up Cleveland. I know that it played such a big role in the first movie, and it’s really such a big part of the city here — just that movie and the culture around it.

It’s been so remarkable to see that. I think that, in a lot of ways, it sort of paralleled the growth of the movie. The movie came out, it did ok in theaters, it wasn’t a massive hit. At that time, television cable wasn’t as popular. You just kind of thought, “Well, that was great,” and you sort of move on. Right? That was your movie.

And it began to gain life, which was so great to see. It’s been really cool to also hear about Cleveland. I just will say this, and I really do say this often: Cleveland was a partner in this movie. We were a small-budgeted movie. They left the decorations up downtown so that we could shoot around Higbee’s and have it look like it was a higher-budget Christmas extravaganza in downtown. We utilized so many of the local people as extras. A lot of people that had never acted before, were in a lot of movies that were coming to Cleveland. They did such a great job.

I have a very, very fond place in my heart and will forever for that city. Just as I said, the partnership that it formed. Just the great people that worked there, the local Clevelanders we were able to hire. That sentiment was shared by the filmmakers, as well. It’s been great to see the city embrace the film, and it’s certainly a two-way street for those of us that actually worked on it.

CM: Do you have any Cleveland memories or stories from filming, 39 years ago, the original movie?

PB: For sure. I think we were staying downtown. Certainly Higbee’s; being inside that department store, in that sled that was there, us being kids. They certainly weren’t getting us off that thing during filming; it was probably the only complication. And the extra kids as well, we had so much fun.

I really remember, as a kid, working in things, you’re still a kid, so you have your obligations to work but you still want to play, and we had each other. But so many of the extras and other talent that were working locally there were so fun. I just remember playing with them and bonding with them, and nobody cared that you were from Hollywood or they were from Cleveland, or whatever, it didn't really matter. We were just all kids and they were such great people.

CM: The new movie was filmed in Bulgaria. I was wondering why it wasn’t filmed in Cleveland, too? What was that filming experience like?

PB: We needed to really be able to fully recreate that street. That would have potentially required either the demolishing of homes on the street and erecting things that looked like those neighbors’ homes, because obviously, that street has changed over time. You kind of have to build things in Hollywood fashion, that are a facade but also allow light through. They’re kind of shells of homes, but Hollywood versions of them. It was important to be able to do that. Just as Hollywood has moved around the globe in terms of availability and stage space, there are great craftsmen and great crew there, as well. What was, again, most important to us, was to really recreate this Cleveland street in our movie and have it feel exactly as it did in 1983, and we were able to do that there.

CM: In the trailer, you do see the house, it looks just like the original. You see some bags from Higbee’s. Are there any other Cleveland-esque things that people can expect to see?

PB: Yeah. Not only is it the house, but we built, I think, 11 structures, to scale and replica, of what the street was like in 1983. It’s the Bumpus House next door, houses going all the way down the street if you’re facing the house to the right, across the street. You’ll see them throughout the movie. I think for fans that remember exactly what that street looked like and in references to the old movie, we took painstaking detail to really match everything as best as possible and to have what it’d look like 30 years later, with a few coats of paint on it. You’ll feel that also.

You’ll feel the steel mill that was behind the Parker house. Those moments that were in the backyard where you felt the smokestacks in the distance, those are all in. Those are all posited in. I think fans will see and feel like they’re back in the universe pretty quickly. The interior of the house was very much the same. A lot of those interiors we shot in Canada for the original, but it’ll feel like you’re back in the Parker home. 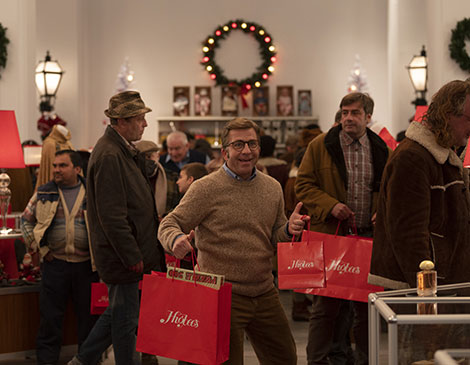 What’s your favorite scene in the new movie and why?

I think, similar to the original, which when you really look at it — there's really not a lot of set pieces. There are not a lot of big-concept scenes. It’s this idea of things we all go through at the holidays — getting a Christmas tree, trying to cook a turkey. These very simple things that we move through, that become very high-stakes because something invariably goes wrong, and we’re trying to hold on and get it right.

We have some new things that the Parker family has to deal with. I think probably the Christmas carolers is a pretty fun new scene that also poses the question of, carolers seem to be, you either love them or hate them and there's not a lot of middle ground. You’re either scared or repulsed by them, or you absolutely love them. That seems to be true. That question is posed to the Parker family and I think the audience as well.

CM: Ralphie Parker in “A Christmas Story” — that has to be a role that sticks with you. What’s it like to be a holiday icon at this point?

PB: The short answer is, it’s great, because I love Christmas. I’ve always loved Christmas. It took time for it to grow and probably in some ways that was better than an overnight success or transformation. Having it build and having it build because it’s sincere and people love the movie, it’s just such a great feeling. I do love Christmas, and you’re not going to get away from it, so there’s certainly no fighting it. It’s just genuine when you meet fans, that they honestly and genuinely love the movie. If you’re not okay with that, then you’re in the wrong business.

CM: There are other “A Christmas Story” sequels out there from over the years. What sets this one apart?

PB: I haven’t seen them and had nothing to do with them. To me, this is the sequel to the movie, this is the cast and characters — this is an adult Ralphie with his own family, trying to put on a Christmas like he had when he was growing up. Our starting point was, the first movie was very much based on Ralphie’s pursuit of the Red Ryder BB Gun, and that being symbolic of any kid’s ultimate Christmas gift. That idea that when you’re a kid, Christmas really is, you want that great Christmas gift. But then when you’re an adult, you really want Christmas to be perfect for your kids. That’s a big shift. It gives him a very direct, I think, and relatable quest once again, that parents go through, that grownups go through. That becomes his BB gun, so to speak. The idea of Ralphie as a dad and as a husband and checking in, where are these characters now? And being able to have all the original cast there to do it — that, to me, that’s the sequel to the movie.

“In the CLE” newsletter — your guide to fun throughout The Land. Arriving in your inbox every Wednesday, this weekend to-do list fills you in on everything from concerts to museum exhibits — and more. Click here to subscribe.