Like a drunken flashback, I feel at home as soon as I walk into Big Mamma’s Burritos. Sure, I hadn’t traipsed down the red bricks of Court Street from The C.I. to get there, and it’s barely 8 p.m. instead of the 2:00 a.m. ritual of my Ohio University days. But as a little Chipotle Ranch drips onto my Bobcat green “Take Me Back To Athens, Ohio” T-shirt, something familiar bubbles up in my guts. “We’ve been woven into the fabric and the DNA of the collegiate experience for generations of college students,” says co-owner Jerry DePizzo, whose saxophone playing in the Ohio State University-launched jam band O.A.R. also played as the soundtrack to its own fair share of keg parties. “Our growth strategy is basically to go to the areas where people that go to OU come from.” The restaurant first set up shop downtown at the Whistle and Keg Brewery and Beer Hall but didn’t quite take off due to varying hours and being hidden in a shared location. After COVID-19 and the May 30 protests diminished foot traffic downtown, the brand bolted to Gordon Square. “After first touring Lakewood, we just thought we were a great fit for Gordon Square, and we thought Gordon Square was a great fit for us,” he says. Here’s a few things to know about the new burrito spot. 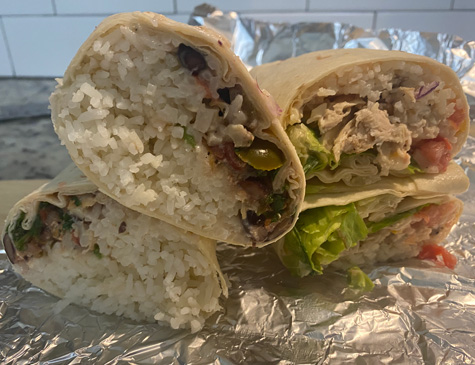 The Food
If you’re looking for an authentic Mexican meal, go to La Plaza Supermarket. But if you want some star spangled stoner food, Big Mamma’s delivers with options such as The Philly ($7.95), a torpedo of steak, sauteed onions, tater tots and chipotle mayo, and the Cinci-inspired Chili ($8.95), filled with Skyline Chili, rice, sour cream and more. Yet, mild options such as the signature Chipotle Ranch ($7.95), vegan selections such as the Vegan Chorizo ($9.95) or the Beyond Burrito ($9.95), and the choice to build-your-own burrito ensure there’s something for everyone. “We try to surprise and delight our customers with our own adventurous styles and flavor profiles,” says DePizzo. “At other burrito restaurants you get the same thing every time through a conveyor. We make every burrito fresh for you, exactly how you want it, no matter your pallet or diet.” 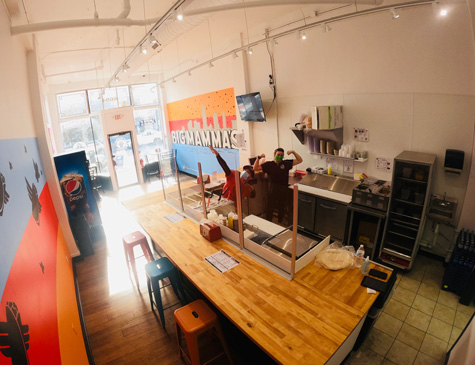 The Space
Located in the historic Gordon Square Arcade, the takeout-focused space offers tall ceilings and a big glass front with two high-top tables that will feel roomy to anyone who’s squeezed in to the Athens location during the late-night rush. Muralist Clint Davidson of Columbus marked the space with an orange-red-and-blue mural depicting a Godzilla-sized Big Mamma’s logo over the Cleveland skyline. “We wanted to represent not only the Big Mom's brand, but also elements of the local community as well,” says DePizzo. “We want our brand to feel like home, like part of the community.” 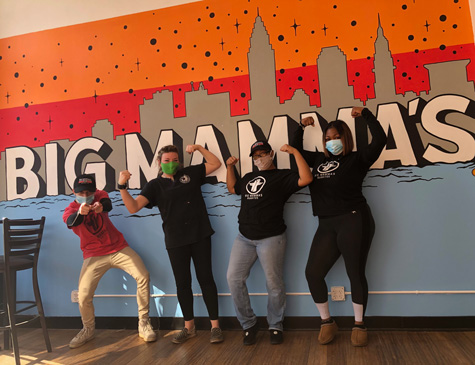 The Future
Big Mamma’s was expanding even before DePizzo and co-owner Matt Crumpton, who previously owned the Ohio-based late-night calzone franchise D.P. Dough, bought it out in February 2019. In Athens, the restaurant features an adjacent craft beer store and added a build-your-own hot dog menu called Tommy’s Dogs. Soon after purchasing the franchise, the business partners opened a Grandview location, which also features a salad maneu called Chippy Chop Salad. Similarly, the Gordon Square location as it is isn’t the ceiling of this company’s ambitions. Even the current hours are subject to change as local COVID-19 restrictions hopefully eventually loosen. “We plan to expand inside out and slowly grow into those other two concepts and run delivery out of that one location,” he says. “We’re also a late-night brand. While late-night means different things in each community, maybe it’s not 3 in the morning like in Athens, we intend to be there for our late-night folks in the Gordon Square community.”