Restaurants are spilling out of the dining room and onto West 25th Street thanks to parklets, which transform parking spots into patio space for restaurants seeking to create more socially distanced options. And that could mean the start of a trend in neighborhoods across the city.

Six street parking spots in front of Market Garden Brewery are now one 145-foot, 96-seat patio complete with wooden picnic tables, astroturf and summer shandy-yellow umbrellas. Simply sit down and scan a QR code to pull up the beer and food menu (there are paper ones for the technologically wary). A waiter will take your party’s order as you enjoy drinks in the street. The patio officially opens Friday at 4 p.m.

“For the time being, the great outdoors are going to be the primary choice for a lot of people who feel more comfortable in fresh air,” says Market Garden owner Sam McNulty. “It’s getting us back to a bit of the pre-COVID normalcy of spontaneous interactions with neighbors and friends and friends you haven’t met yet.” 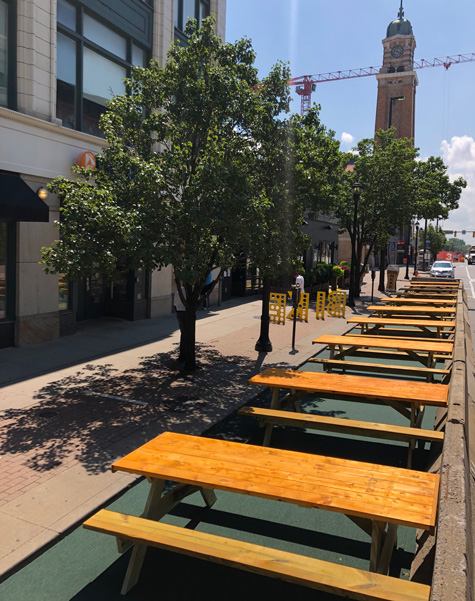 Owner Sam McNulty says as soon as bars and restaurants were shut down, his company began brainstorming ways to offer a safe experience, presenting a proposal a few weeks ago for a concept similar to solutions in New York City and other places. The West 25th Street brewery is the first bar and restaurant to have its application for parklets approved by the city of Cleveland, but others are in the works.

“The city responded very quickly, rushing through the legislation, getting it approved and, within a week, delivering these concrete jersey barriers,” says McNulty.

“It feels festive to be out in the street. There’s astroturf, beautiful picnic tables. It's comfortable,” says McNulty. “It’s one of these streetside interventions that Clevelanders normally only see when they visit other world cities.”

While the parklets are on a trial period right now, McNulty hopes the city will see the upside to sacrificing a few parking spots for extra dining space. Eight years ago, there was controversy over whether the city, pushed by McNulty, should replace one parking spot near Nano Brew with a Bike Box, a large shipping container which holds 30 bikes. The Bike Box was so successful there are now more than 10 across Cleveland.

“Cleveland has been very, very car centric for the last 75 years. Priority has always been given to cars over humans,” says McNulty. “A silver lining to this difficult period is that we're kind of blowing up the old rules and tearing down the old assumptions of what can and should be done.”

As the pandemic forces local businesses and the city to reimagine how people use their spaces, McNulty also believes there is an opportunity to expand this concept even further — especially in a neighborhood with a 450-spot parking lot.

“[The Bike Box] made a lot of sense — a zero carbon footprint parking area for 30 bicycles versus one gas guzzling car,” says McNulty. “I'm hoping and predicting that this parklet experiment that COVID kind of opened the door to will soon be seen as a great idea and become a permanent fixture across different neighborhoods in the city.” 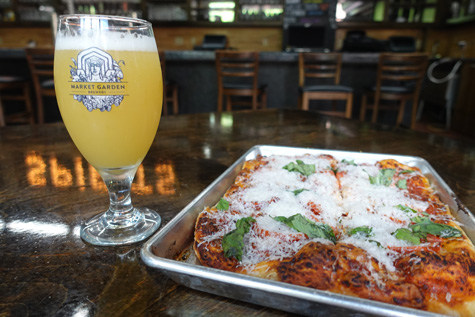 Try This: What does a chef do in quarantine? They get a sourdough starter and start making pizza. Market Garden chef Andrew Bower spent his time creating a new “Cleveland-style” pizza with a sourdough crust. And yes, we already added the Polish Boy pizza, complete with french fries and kielbasa, to our summer must-eat list.