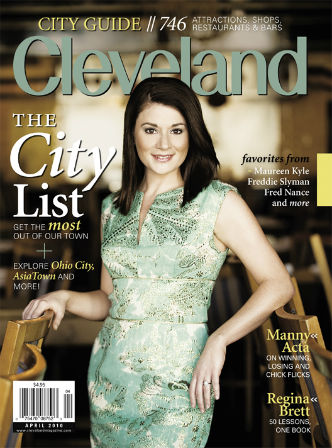 Grum’s has been a Coventry fixture for 32 years, so when Ilene MacLellan took over five years ago, she kept it vintage.

Treats With a Twist

Not sure you want to try egg tarts, mooncakes or barbecue pork buns? You just haven't visited Koko Bakery yet.

Teeba Furat Fahdil Hameed is a Daisy Scout who loves her dog and playing with other kids. She's also an 8-year-old who is facing her 12th surgery, after her family's tragic encounter with a roadside bomb on an Iraq street.

The St. Clair-Superior neighborhood’s AsiaTown district offers a variety of authentic Asian cuisines and the ingredients needed to bring a taste of the Far East and Southeast Asia to your kitchen table.

Heat of the Moment

John Stark Bellamy II is the keeper of our city’s darkest tales. After moving away from Cleveland five years ago, he returns this month with a new anthology and a local lecture series.

The West Side Market and Great Lakes Brewing Co. alone make it a must-visit neighborhood. But West 25th and Lorain is just a starting point for cool hangouts.

Rocky River’s century-old shopping district exudes a charm that’s tough to find these days. With Beachcliff Market Square nearby, you can explore the city’s roots and remade retail center in one walkable visit.

Out of Our Misery

Rant of the Month

Marcia Fudge is faced with a heavyweight opportunity to reshape local politics. But can she land the punches necessary to get the job done?

A hidden museum waits its turn in the shadows of a Lakewood shop.

Breast cancer survivors bring their journeys to the stage.

The American Indian is not dead.

Parade of Homes — In the Market

The combination of federal tax credits and a buyer's market make right now an optimal time to buy a newly constructed home.

Rescuing A Man From Icy Waters

James Noyes, 26, is pursuing his doctorate in microbiology at Kent State University. On the afternoon of Jan. 8, the Hubbard man was driving along Salt Springs Road in Trumbull County when a vehicle in an oncoming lane lost control.

Kid stuff grows into a serious form of exercise and expression.