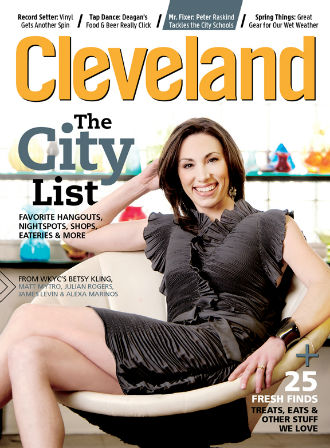 Akron's Posh Pierogies puts its own spin on the classic ethnic side dish.

We scoured some of our own favorite places for locally made gifts and goods, great events, and enticing eats we can't resist. Here's our list of the new, the popular and the surprising. It's 25 reasons to get out and rediscover what's hot in Cleveland's n

It might be normal for Clevelanders to hate him, but I'd rather cheer for somebody.

As one of three Republicans elected to the new Cuyahoga County Council, Jergens Inc.'s Jack Schron is now on the job to help companies like his succeed.

The city's restoration of League Park provides a new focal point for Hough.

Peter Raskind works best against the clock. The last CEO of National City has found an unlikely second act as interim turnaround leader of Cleveland's port and schools.

The blogger dedicated to the neckwear of NBC's Brian Williams gets a surprise gift.

Singer-songwriter Brent Kirby leans on his able backing band and alt-country influences for his third solo release, Coming Back to Life.

Vince Slusarz is helping keep the album alive. His Gotta Groove Records is one of less than a dozen U.S. manufacturers still pressing vinyl.

There's no avoiding wet weather. At least you can look stylish while dashing through the downpours.