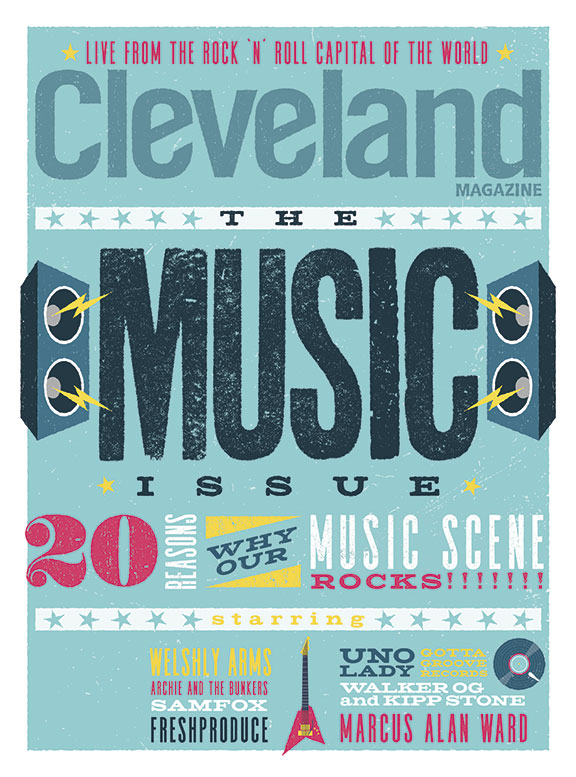 20 Reasons Why Our Music Scene Rocks

As the Rock & Roll Hall of Fame Induction Ceremony struts into town, we showcase a lineup of musicians, venues, vinyl makers and more who are amplifying our city's sound right now.

After 15 Years, Juji's Cafe Is Bumped Out Of Statler Arms

The hot spot for residents was not offered a renewal on its lease and has since moved to The Langston.

This Tremont spot has more than just a good cup of joe.

Celebrate Dyngus Day With These Polish Treats and Delicacies

From how to make your kielbasa to what to stuff in your pierogi, we've got you covered.

Day drinking can't go wrong when you get to craft your own classic.

Breathtaking decor and an exciting — if pricey — menu makes this dining experience worth the investment.

This labor of love is done each morning at Rudy's Strudel and Bakery.

This new chain offers an extensive menu with quick service.

12 Places To Get Hip To In Old Brooklyn

From Guatemalan street food to a skateboard shop, you won't want to skip any of these hot spots.

1972: Charles See Looks Back On His Storied Career

The 72-year-old retired last March but is still active in the community.

A Woman Looks Back On Her Good Deed

With historically low unemployment and a corporate tax windfall, is there a chance it will finally help the least of us?

After 16 years in Congress, former Cleveland mayor Dennis Kucinich is running for Ohio's highest office on a platform of infrastructure jobs, free college tuition and more.

After a month bumping local bands in his headphones, editor Steve Gleydura ponders the "Cleveland Sound."

Steve Kaselak's over-the-top decorative celebration draws about 2,000 people on a normal year and $1,000 in donations for charity.

Check out six of our favorite #CLE items.

The Greater Cleveland Regional Transit Authority may soon be in trouble. We need a big, inspirational idea to save it.

The Final Days of Big Fun

When Steve Presser closes his vintage toy and novelty store, it will mark more than just a loss for Northeast Ohio's collectors. A little piece of our past dies with it as well.

Push your smallest friend to the finish line for $150 and the ultimate bragging rights.

20 Reasons Why Our Music Scene Rocks

As the Rock & Roll Hall of Fame Induction Ceremony struts into town, we showcase a lineup of musicians, venues, vinyl makers and more who are amplifying our city's sound right now.

A Generation of Kid Cudi Fans Are All Grown Up

We talked to local rappers about the Shaker Heights native's influence on today's hip hop.

We talk to Jason Pettigrew, AP's editor-in-chief since 1986, about the publication's alternative evolution.

The chef's work inspired a documentary that was nominated for an Oscar this year.

Cranking Up Three Songs From Local Bands Paints A Picture

We asked music composer and sound engineer Benjamin Smith to break down each element of three songs so art director Maria Amador could visually represent them. Things got a little loud and messy.

CIFF2 aims to connect young filmmakers of color with mentors in the industry.

Five Ways To Get In On The Rock Hall Induction Festivities

For eight days in April, we really are the Rock 'N' Roll capital of the world.

FreshProduce Will Not Be Underestimated

These MCs are unapologetically taking over the game.

Hair, Coffee, Cash — Check Out These Crazy Vinyl Records Being Pressed In Cleveland

Jay Leno Tells Us Why He Doesn't Miss The Tonight Show

The comedian keeps himself busy with new adventures.

Local Artist Talks About His Work With The New Yorker

Cannaday Chapman tells us about his inspirations, process and more.

The electro-soul man ponders human consciousness as he sits on the precipice of his future.

Michael Stanley Keeps On Rockin' — No Matter What.

The local rocker discusses recovering from a life-threatening heart surgery.

Roxy Toporowych hopes to shine a light with her film on the plight of Ukraine and the strength of its women.

Six Steps To Starting A Band

Modern Electric co-founder Garrett Komyati tells us why it's never been easier to start your own super group.

Initiatives such as CLE Music Shelves are helping bands get heard.

We once used canvas to document historic details.

The Cleveland Sound Is (Still) Underground

How Cleveland's legendary '70s underground scene paved the way for the robust musical landscape of today.

Theatre On The Spectrum's New Program Helps Adults With Autism

What started as a youth program is now making adults with autism the stars of the show.

These 20 Northeast Ohio Artists Helped Change The Face Of Music

From Devo to Michael Stanley Band, we rank the most influential 20 bands in Cleveland's history.

Kipp Stone and Walker OG sit down with Cleveland Magazine to discuss the hip hop scene and what it needs to propel itself to the national spotlight.

We talked to the budding rock stars soon after releasing their hit single "Legendary" about staying home to record, channeling LeBron, Cleveland pride and what's to come for the driving blues-rock band.

You Need To See This Vocal Looper In Action

Christa Ebert, also known as Uno Lady, puts on a performance that needs to be seen to be believed.

You Still Haven't Been To The Best Venues In Town

Check out these six venues to see anything from up-and-comers to Grammy winners.

Trying to save some green doesn't mean your garden should pay the price. Before you head out to a garden center for a spring spruce-up, dig into these money-saving shopping tips.

The Zimmermans love living in the middle of the city.

Spice Up Your Spare Room With These Tips

After his own struggles with depression and suicide, Josh Ruminski started Happy Thoughts Candle Co. to promote good vibes and suicide prevention.

Date Of The Month: Score Major League Fun With The Lake County Captains

Suite tickets, a buffet and the chance to watch future Indians will make for a perfect date night.