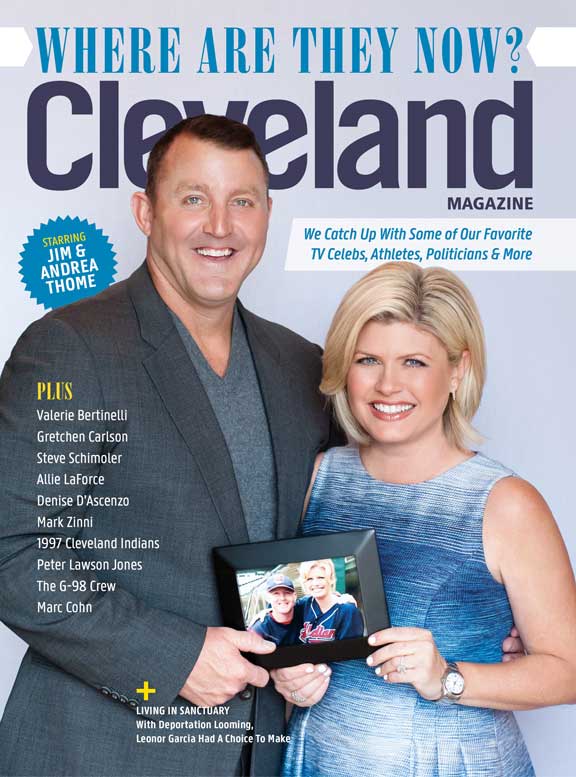 Before the hustle and bustle of the holiday season is upon us, gather round for a modern take on a white elephant party that’s full of fun, food and friends. Read on as we unwrap a host of party-planning tips, decorating advice and easy recipes for a bash decked out with some of our favorite things.

Where Are They Now: Andrea Thome

The former TV news anchor and wife of Indians slugger Jim Thome has found her groove with a series of novels set in the Smoky Mountains.

Get into the holiday spirit with these foodie events.

How It Works: Pizza ATM

We pulled an all-nighter to see how this cheesy contraption works.

Ten foods that will bring you health, wealth and good tidings.

Courtney Bonning brings flavors such as blueberry cake and chocolate covered strawberry to her Hingetown shop.

Everyone watches A Christmas Story around the holidays, but Kelsey Elizabeth wants you to eat it too.

Three New Changes At The Plum

From its name to a new brunch menu, we're still crushing on this spot.

Upgrade Your Sandwich At Gourmand's Deli

The Valley View spots has more than 50 options.

1944: A Snow Storm And Below-Freezing Temperatures Shut The City Down

One unidentified guardsman braved the cold and watched a sheet of ice that stretched over a mile.

We quiz host Hakem Dermish on the show's history.

Cleveland's Outer Neighborhoods Could Be The Key To The Future

While underappreciated, these areas have historic value that adds up.

His new book chronicles his life as one of the radio's first shock jocks.

In August, Leonor Garcia, who entered this country illegally at the age of 15, was given two weeks to return to her native Mexico. Instead, the Akron mother of four has been living in sanctuary at Forest Hill Presbyterian Church in Cleveland Heights.

A yellow folder filled with documents helps one woman connect with her grandfather and her Ukrainian identity.

A city councilwoman just five years ago, she now heads to the Cuyahoga County Democratic Party.

The Choices We Make

None of Leonor Garcia's choices seem like good ones. But that's also where her power lies.

Hand-written receipts, big band tunes and endless toy trains will throw you back to your childhood.

Transport Back To Summertime At Backyard Bocce

Grab a drink, eat some pizza and play some oversized games with your friends.

Where Are They Now: 1997 Cleveland Indians

Amazingly, it’s been 20 years since Mike Hargrove, Sandy Alomar Jr., Jim Thome and the gang were two outs away from a championship.

Where Are They Now: Allie LaForce

The former Fox 8 reporter covers the sidelines of college football and basketball across the country, but still makes time for home.

Where Are They Now: Andrea Thome

The former TV news anchor and wife of Indians slugger Jim Thome has found her groove with a series of novels set in the Smoky Mountains.

Where Are They Now: Caila Quinn

After two chances for love on The Bachelor, she's looking to find it with a new boyfriend.

Where Are They Now: Emily Keener

The Voice contestant is building off her success with a new album due out next year.

Where Are They Now: Gretchen Carlson

The former WOIO Channel 19 reporter and anchor used her own experience to help others who have been victimized by sexual harassment.

Where Are They Now: Hot In Cleveland

For five seasons, the TV Land comedy put our city in the small screen spotlight.

Where Are They Now: Jay Westbrook

The former Cleveland city councilman continues to be a champion for the people.

Where Are They Now: Jen (Schefft) Waterman

An early reality show sensation, the Mentor native has returned to Northeast Ohio to raise a family.

Where Are They Now: Julie Zeilinger

Where Are They Now: Marc Cohn

The singer-songwriter behind "Walking in Memphis" reflects on his Cleveland upbringing.

Where Are They Now: Mark Zinni And Denise D'Ascenzo

As TV anchors separated by decades, the former Clevelanders have joined forces at the top-rated station in Connecticut.

Where Are They Now: Mary Joe Fernandez

The Olympic gold medalist tennis player stays close to the game as an ESPN commentator and mother of two budding stars.

Where Are They Now: Morgan Goldstein

Where Are They Now: News Flash

We checked in with some of our favorite TV personalities from the past.

Where Are They Now: Peter Lawson Jones

The former Cuyahoga County Commissioner has turned to a career in acting and playwriting.

Where Are They Now: Sadhu Johnston

The co-founder of the Cleveland Green Building Coalition has plans to make Vancouver, British Columbia, the most eco-friendly city in the world.

Where Are They Now: Steve Schimoler

The innovative chef and restaurateur had spots in Ohio City, Uptown and the Flats before it all came crashing down.

Where Are They Now: Susan Goldberg

The former Plain Dealer editor creates a destination for people to explore the world and all its beauty.

Where Are They Now: Ulyana Horodyskyj

Here's what three of G-98's most memorable radio personalities are up to these days.

The comic book writer talks to us about his new series, working with Stephen King and more.

Deck The Halls With Postcards From The Past

Give The Gift Of Well-Written Stories

Wrap up one of these four book by local authors this holiday season.

Northeast Ohio's Past Can Now Be Found All In One Space

Three Things You Have To Do At Kringle's Inventionasium Experience

We Break Down The Chagrin Falls Popcorn Ball Drop

Learn how much the whimsical fest weighs and more.

Before the hustle and bustle of the holiday season is upon us, gather round for a modern take on a white elephant party that’s full of fun, food and friends. Read on as we unwrap a host of party-planning tips, decorating advice and easy recipes for a bash decked out with some of our favorite things.

Impress With Hand-Drawn Paper and Home Goods From Hazelmade