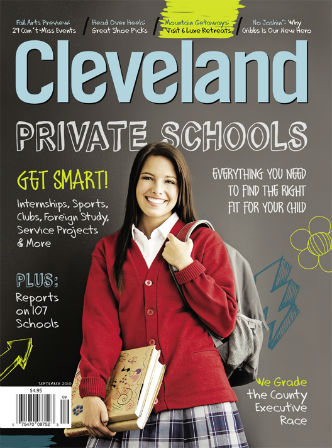 Two Years Ago, Matthew Mytro traded a steady paycheck for the risky life of culinary entrepreneur, choosing short-term cooking and consulting gigs to pay the bills. The 27-year-old chef, who built his reputation at Boulevard Blue and Paladar, wanted more

Nomadic chef Michael Herschman is serving some of the best food of his career at Menu6.

As we wash away the grime of our 200-year-old county government, important choices lie ahead. The biggest:
Who we elect as county executive.

Cleveland's daily deserves credit for shaking off a legacy of lethargy, stirring the town to outrage and helping to change a government run amok.

Nike's LeBron James marketing campaign gets turned on its head and into a raft of T-shirts. Here are two of our favorites.

We've had bad luck with our recent sports darlings. So how is it that our new flame has been under our noses all along?

We asked more than a dozen smart Clevelanders what they want from the executive and what ideas they hope the new county government will take up.

25 Other Picks for Autumn Amusement

Our guide to the season's best in art, music, theater and more

Cleveland's annual arts and technology festival gets a change of scenery.

Modern Rock: The Rock Hall At 15

Fifteen years after opening its doors, the Rock and Roll Hall of Fame and Museum looks forward with a new public archive and soon-to-be-renovated galleries.

Scene of the Crime

Author James Badal returns to the city's infamous string of unsolved murders in his new book.

The star of Dixie's Tupperware Party sure can work it. You've never seen a sales pitch like this. by Amber Matheson

The Cleveland Museum of Art focuses on religious relics in its newest exhibit.

Spaces Gallery allows artists to revel in the journey.

Years in the Makeup

Kiss' Paul Stanley talks about the music behind the flames, fake blood and greasepaint

Hosts with the Most

A New York City duo looking for a change returns home and finds a new state of mind with Epiphany in downtown Hudson.

Add some fun to your fall footwear with these well-heeled shoes.

A stay at the Inn on Biltmore Estate, nestled in the Blue Ridge Mountains of North Carolina, grants access to the unrivaled grandeur of America's largest home.

The newly renovated Omni Bedford Springs entices with the restored splendor of two centuries worth of relaxation.

Tucked in New Hampshire's White Mountains, the Mountain View Grand waits as a classic place to slow down.

Apollo's Fire immerses itself in the world of Monteverdi with a five-day affair.

More than half of all high schoolers joined the band at Open Door Christian Schools in Elyria last year. That says something for Chris Clark, the school's band and choir director and music teacher for the past 20 years.

Love for basketball and St. Edward go way back for Eric Flannery. The St. Ed grad is going into his 15th season as head basketball coach with a 258-81 record. Flannery also spent three weeks in Singapore last month as the head coach of the USA Basketball

Headmasters at Jewish day schools typically last three to five years in one school. Rabbi Jim Rogozen is now on his 18th year as head of the Gross Schechter Day School in Pepper Pike, where 333 students (pre-K through eighth) focus 50/50 on general and Je

For Northeast Ohio's private school students, a well-rounded education is sculpted out of much more than books. As we discovered from our biennial surveys and a day at the area's oldest private school, learning happens in and out of the classroom, and les

For Northeast Ohio's private school students, a well-rounded education is sculpted out of much more than books. As we discovered from our biennial surveys and a day at the area's oldest private school, learning happens in and out of the classroom, and les

At 18, Richard Bradley has volunteered more hours than most people will probably rack up in their entire lives. Bradley graduated from St. Vincent-St. Mary in Akron and begins classes at Ohio University this fall.

The seventh- and eighth-grade teacher at St. Francis School in Cleveland knows learning happens beyond the classroom. He also serves as director of The Club of Distinguished Gentlemen and the Social Justice Club.