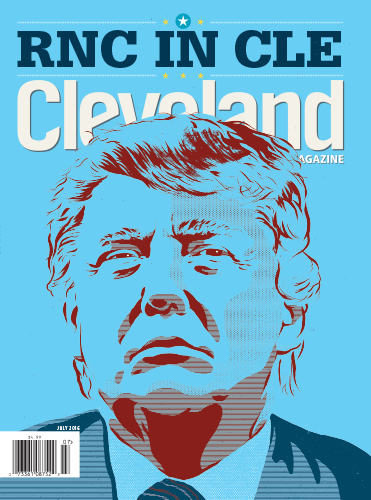 Try the trendy bivalves at Butcher and the Brewer, Alley Cat and more.

A wood-fired oven is the secret to a golden, chewy crust.

Drink We Love: Norka Sodas Brings the Fizz Back to an Iconic Local Brand

Fill Up Your Cart with Local Pride

From coffee, smoothies and wine, here's where to get your drink on.

The Cincinnati mainstay opens it first location in Crocker Park.

Survival Tips: Make the Most of Your CSA

Eat fresh without the headache and spoiled surplus this summer.

Weekend Project: 4 Juicy Peach Recipes to Test Out This Summer

You Had Us At Deep-Fried Meatballs

1924: When Real Elephants Came to Town

The party symbols came from Atlantic City, New Jersey as part of a vaudeville act

The words still mum on if Clint Eastwood will bring his empty chair to Cleveland, but here are some stars to keep your eyes peeled for.

Local restaurants are showing off their political chops with these patriotic-inspired dishes.

Spend the Fourth of July with these Snapchat-worthy explosions.

Public Square debuts with creative flair as three years of public art kick off this month.

The Republican National Convention could be an opportunity for Cleveland to gain an edge in a competitive marketplace.

We tally the winners, losers and famous firsts from the 1924 and 1936 Republican National Conventions.

The anchor and chief national correspondent tells us his take on the election.

Don’t Test-Drive this $3,999 Riding Mower Unless You’re Ready to Buy it

Go behind the scenes this month as associate editor Jason Brill takes Cub Cadet’s RZT-S Zero out for a spin.

At some point, we all experience happiness, regret, success, struggle, love and loss. For these Clevelanders, the ups and downs of a life well-lived come with many lessons.

At 87-years-old, the local theater legend still has a stage presence in Cleveland.

The 70-year-old wellness expert is on a mission to change the health of our nation.

At just 16 years old, the Japanese American was evacuated from California and put into a Japanese internment camp.

The 92-year-old four-time gold medal Olympian is the only male to have won both the 100-meter dash and the high hurdles.

93-year-old Joan Luntz was a household name as an innovator of plastic dinnerware.

For more than 50 years, the 70-year-old has been cutting hair at the same barbershop.

The 74-year-old once saved State Theatre from demolition in the '70s.

The 69-year-old Hough resident remembers the upheavals of the 1960s.

The 74-year-old has created harmony for more than 45 years as choirmaster at St. Theodosius.

At 76-years-old the former Congresswoman recalls a career in politics.

Before the 83-year-old began his career at Ford Motor Co., he was an infantryman in the 1950s.

The 87-year-old architect continues to look to the future.

The 67-year-old donates what little money she has to charities and activist groups.

Lana Moresky recalls when women became a political force in the convention process.

Fremont, Ohio Was Home To Our 19th President, Rutherford B. Hayes

Take a swing through the state for a presidential history lesson.

Grab A Bipartisan Beer This Week

No matter your political views, we can all agree these two RNC-inspired brews take the win.

Head South To Step Into Our 27th President's Former Home

Children analyze the meaning of America in self-designed essays and posters on display this month.

After two long years of planning, Cleveland's moment to reset the "Mistake on the Lake" narrative is finally here. So don't muck it up, ya jerk.

While the Republican National Convention officially runs July 18-21, there's a lot of action you won't see on TV.

Here's The Inside Scoop On How Get Into Swanky Private Parties

A Republican Party insider gives us the low down on the best events around town.

Here's why Donald Trump is on the cover of our July #RNCinCLE issue. (We'll let you fill in the blank.)

Schron sees signs the Republican party may be close to breaking through in Cuyahoga County.

Jeremy Feador Takes a Swing at Preserving the Tribe's History

The NBC News and MSNBC correspondent gives us her takes on Trump's celebrity factor, the biggest issue of this election and more.

Kelly O'Donnell is in Cleveland to Cover Her Sixth Presidential Election

Make A Statement With Your Outfit

A Cleveland History Center exhibit weaves together the connection between our outfit choices and political views.

The 41-year-old from Palmer, Alaska, is pledged to Marco Rubio.

The Massachusetts resident is pledged to John Kasich.

The 60-year-old from Litchfield Park, Arizona is pledged to Donald Trump.

Polish Up Your Political Pride with RNC-Inspired Swag

Whether you're a die-hard Republican or just looking to display your civic pride, here are some fun ways to commemorate the political affair.

RNC Got You Jazzed? Here's How to Get in on the Grassroots Action

If seeing the political process up close has inspired you, here are a few tips for your campaign from newbie to political office.

RNC Got You Jazzed? Here's How to Run for Office

RNC Got You Jazzed? Here's How to Run for Office

RNC Got You Jazzed? Here's How to Serve as a Future Convention Delegate

Say Hello to the New and Improved Public Square

The city's central space rolls out a welcome mat to residents and visitors.

Scope Out the Downtown Spots With Our RNC Map

With convention activities inside The Q, step away and experience the circus that's happening.

Take A Quick 30 Minute Drive To A Historical Site

James A. Garfield's Mentor home is a sprawling estate dedicated to the life of the 20th U.S. president.

Festival sets sail for a new port with a treasure chest of history and fun.

The Cuyahoga GOP Wants To Be Your Convention Host

From a watch space to nightly entertainment and food, the Cuyahoga County Republican Party has you covered if you won't be at The Q.

Charlie Butts reflects on 1968 and 1972 conventions, police brutality and more.

The McKinley Monument is Memorialized as Grounds for Grief

William McKinley's monument in Canton was a nation's somber reaction to a series of presidential assassinations.

I Approve This Message: Decoding Political Ads looks at the power behind campaign advertising.

Whether you're meeting with bigwigs or dining with delegates, we've got you covered with these tips from local stylists.

With bars implementing a 4 a.m. last call, you'll need these tips to keep up with partying politicians.

He’s the elephant in the room. The presumptive nominee. Huge. Donald Trump may not be what anyone expected when Cleveland won the bid to host the Republican National Convention. But here we are — a defining moment for the city, the GOP and our country.

David Gilbert shares his take on Cleveland's RNC victory as host to 50,000 people.

When the RNC is Gone, Public Square Will Live On

Here are six reasons why the speedy completion of Public Square stands as one of the best results of the RNC.

Why You Need This $3,999 Electric Lawnmower Now

Cub Cadet’s RZT-S Zero will actually make you want to cut the grass.

The co-anchor of Fox News' America's Newsroom shares his take on Trump and all things RNC.

The dark, unsettling musical at the Near West Theatre hits the stage just in time for the RNC.

Michael Hudecek hopes to inspire a creative energy with Craft Up Collinwood.

Machine Gun Kelly Talks Cleveland, Being No. 1 and Roadies

The Shaker Heights native has a busy summer of big and small-screen releases.

Quiz: Which musical is right for you?

With local stages heating up this summer, we have a showstopper for you.

The Land Rolls Out Harsh Realities and New Music from Nas, Kanye West and More

The film portrays what it's like to grow up in inner-city Cleveland.

The hair salon offers a variety of services for those busy professionals on the go.

Pamper Yourself at Gwendolyn Elizabeth With Bath and Body Items

Rocking Red, White and Blue for the Fourth of July is at your Fingertips

Toe Ink owner Kristyl Fuller steps us through painting the stars and stripes on our fingernails.

Say Cheese! Bigger and Brighter Smiles Are the Key to a Happier You

Doctors are paving the way toward a brighter future thanks to cosmetic dental advances.

Turn Back Time with New Skin Rejuvenating and Cosmetic Procedures

These new techniques will have you feeling forever young.