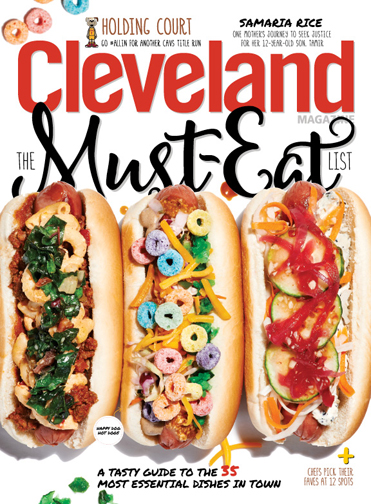 From almonds to pecans, we've cracked the code on these energy-boosting foods.

Cake Boss Buddy Valastro shows us how to decorate with authority.

A writer kicks a hounding fear of canines.

While Samaria Rice searches for justice in the death of her 12-year-old son, she’s rebuilding the community, advocating in his name and working to prevent similar tragedies from happening.

In 1959, the Pipers Were Champions of the National Industrial Basketball League

The team played under the direction of John McLendon, the first African-American head coach in the modern era of professional sports.

Charles Stack has created a new kind of workspace for startups in the city's most iconic building.

We light up a heated debate on Issue 3.

With Cleveland's crime numbers on the rise, the need to reform our city's police department is more important than ever.

We Got Next: Beat Cycle

When there's a break on the court, DJ Steph Floss pumps up the volume — and the crowd.

We Got Next: Digital Drive

3 must have apps for every diehard Cavs fan.

We Got Next: Gum Shoe

Match the Cavs player to their kicks.

We Got Next: Iman Shumpert

4 things to know about the Cav's guard, Iman Shumpert.

We Got Next: Is This Our Year?

ESPN the Mag contributing writer Mark Winegardner examines the Cavaliers odds of winning it all.

We Got Next: James Blair

James Blair reflects on how he felt after his love-driven stunt to Lebron James during a finals game, and how he felt about the King's return to Cleveland.

We Got Next: Joe Haden

Brown's cornerback, Joe Haden shares his love on basketball and the Cavs.

We Got Next: Mo Williams

4 things to know about the Cav's point guard, Mo Williams.

We Got Next: Q Tips

We Got Next: Richard Jefferson

4 things to know about the Cav's small forward, Richard Jefferson.

We Got Next: Social Sweet

We Got Next: Squad Goals

We follow a dance team hopeful as she auditions for the Cavalier Girls.

We Got Next: Timo Says

A few words from Timofey Mozgov.

We Got Next: Wild Pair

With the help of in-arena hype man Ahmaad Crump, we attempt to settle the score between the two Cavs mascots.

Put your fresh-faced days behind you and join the Movember movement with our guide to beards, goatees and mustaches.

Underdog artists get a spotlight with the Maria Neil Art Project.

After more than 50 years of making music, Smokey Robinson still has a hold on us.

Air Play flows in and out of reality with a show that's part circus, part art

Novelist James Renner is back with a twisty-turny thriller.

Jessica Fechtor whips up a memoir about how cooking healed her.

Make your house jollier with these staples from Metro Home.

Ohio City's Blackbird Fly Boutique shows off its creative side with an eclectic mix of clothing and accessories.

The Geiger brothers are redressing downtown with a new clothing store this month.