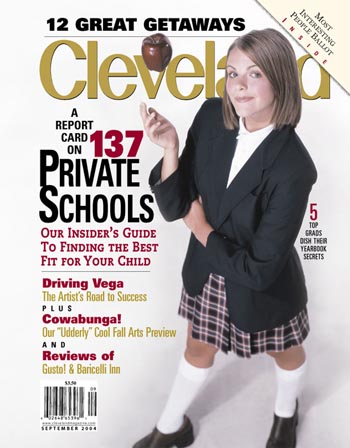 A Night to Remember: The Baricelli Inn

A Whiff of Victory

Eats on the Run

Hal Lebovitz's Cleveland sports memories have been preserved in a new book that documents the best work from his 60 years in the press box. We talked to him about the '04 Tribe, Chief Wahoo and the four rules every sports columnist should follow.

One Hell of a Show

Tale of the Tape

If you want to make music, Tyler Owen is the guy to know. Having worked with the likes of the O-Jays and the James Gang, his downtown recording studio has turned out works by a host of local acts that are now creating a buzz beyond our city.

Trapped in the Status Quo

Cleveland's leaders ask an impoverished city to raise its school taxes, but they're ignoring our greatest need: reforming county government to attract prosperity.

Developing new plays and bringing back Cleveland Play House alums are two of Michael Bloom's goals as the 54-year-old makes his entrance as the organization's eighth artistic director in 89 consecutive seasons. He recently talked to us about his visio

Let's Dance (Before the Music Stops)

Hector Vega's vibrant, geometric, dimensional images have made him one of Cleveland's most commercially successful and recognizable artists. Now, the artist-turned-entrepreneur sets out to conquer new territory with his own gallery and cafe in the Tower P

Give us a few days off -- some precious time to explore, indulge, learn and dream -- and we'll take you places. Soak in the Windy City's hot blues or kick back at the Mandarin Oriental's ultra-posh digs. Walk among the ghosts of Gettysburg or savor

Remember that hockey stud, the theater geek or the cut-up in the school variety show? Bet you can't wait until the next reunion to find out what ever happened to them. Well, we couldn't either. So we caught up with some notable alumni of Northeast Ohio