What a game to kick off this list. With Ben Roethlisberger taking a week off due to a foot injury, this matchup started with the electrifying quarterback matchup of Landry Jones and Johnny Manziel. Roethlisberger wasn’t long for the bench, however, as he entered midway through the first quarter in relief of an injured Jones. On one foot, Roethlisberger carved the Browns up for 379 yards and three touchdowns in one of the more deflating losses of the Mike Pettine era. The lone bright spot for the Browns? Johnny Manziel threw for a career-high 372 yards in the loss.

The aforementioned Pettine era ended with a whimper thanks to this season-ending loss to the Steelers. Austin Davis started at quarterback for the Browns, going 24-for-46 for 240 yards, running back Isaiah Crowell rushed for 53 yards (the Browns rushed for 86 yards as a team) and all the Browns’ points came off the right foot of kicker Travis Coons. The night before the game, Manziel, who was supposed to be in Cleveland getting treatment for his concussion, was spotted in Las Vegas wearing a fake wig and mustache. Pettine and general manager Ray Farmer were fired just hours after the loss.

While the Browns didn’t finish winless in 2016 (we’ll get there, don’t worry), this loss to the Steelers ranks as one of the more embarrassing losses from the lean years. Quarterback Cody Kessler (remember him?) started for the Browns before leaving in the third quarter with a concussion. He and Josh McCown combined to throw for 176 yards (McCown also led the Browns' rushing attack with 11 yards.)  While Roethlisberger wasn’t much better (22-for-36 for 167 yards), Pittsburgh running back Le’Veon Bell had a day, going for 146 yards and a touchdown on the ground.

Just think, without this loss there’s no Myles Garrett. With the Steelers having already clinched a playoff berth, this battle of the backups ended up being an exciting game. Crowell (152 yards rushing) and quarterback Robert Griffin III (232 yards passing, two touchdowns) kept the Browns offense humming for most of the day and wide receiver Terrell Pryor finished off his impressive year with 94 receiving yards to surpass 1,000 for the season. Still, the defense made  Jones look like Dan Marino for most of the day and lost in overtime when Browns conerback Briean Boddy-Calhoun got beat by Steelers receiver Cobi Hamilton for the game-winning touchdown in overtime.

The worst season in NFL history started off with some optimism, as the Browns gave the Steelers all they could handle in the season-opening loss. Quarterback Deshone Kizer looked like he had some potential to be the Browns quarterback of the future (spoiler alert, he wasn’t) by throwing for 222 yards and a touchdown while adding another touchdown on the ground. Kizer linked up with wide receiver Corey Coleman for a three-yard touchdown pass to make a three-point game with 3:36 left, but Pittsburgh sealed the game with an impressive catch from Antonio Brown.

The drop heard around the world. With the Browns driving in the final minutes to avoid going 0-16, Coleman dropped a pass on fourth down to clinch the second winless season in NFL history. The loss set off a chain reaction in Cleveland that helped get the Browns to where they are today. After general manager John Dorsey was hired that December, the Browns cut bait with Kizer, drafted quarterback Baker Mayfield No. 1 overall and traded for Jarvis Landry. Still, in the moment, the sting of Coleman’s drop lingered over Cleveland like a thick fog.

Well, at least it’s not a loss, right? The Browns ended their 17-game losing streak with a tie that saw both teams blow opportunities to win in overtime. After Chris Boswell missed his 42-yard field-goal attempt in overtime, quarterback Tyrod Taylor drove the Browns down the field but Steelers defensive lineman TJ Watt blocked Zane Gonzalez’s 43-yard field goal with nine seconds left in overtime. While Taylor didn’t have the best season opener (he went-15-for-40 passing for 197 yards and a touchdown and interception), he did enough to satiate a fan base starving for competent play behind center. Oh, and wide receiver Jarvis Landry had 106 yards receiving in his Cleveland debut. Not too shabby.

Another loss to the Steelers induces a house-cleaning. A day later, owner Jimmy Haslam would pull the plug on Hue Jackson, firing him and offensive coordinator Todd Haley, with Gregg Williams taking over as the interim head coach. In this loss to the Steelers, Jackson’s Browns looked flat, only totaling 237 total yards on offense. 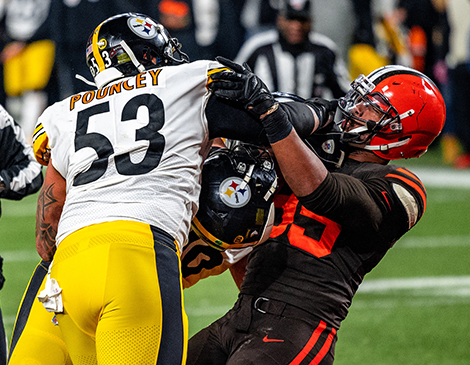 The Browns’ first win over the Steelers since 2014 made headlines for all the wrong reasons. In the final seconds, Garrett and Steelers quarterback Mason Rudolph got into a physical altercation, with Garrett striking Rudolph on the head with his helmet. The brawl, which resulted in Garrett receiving a six-game fine, overshadowed a huge win for a Browns team that was, at the time, still fighting for a playoff spot.

Two weeks later, the Steelers got their revenge, as third-string quarterback Devlin Hodges led the Steelers to a 30-13 win that all but knocked the Browns out of the playoff race. The Browns held a 10-0 lead for most of the first half, but the Steelers got 10 quick points before halftime to tie it before taking a 20-10 lead in the fourth quarter. Mayfield threw for 196 yards and a touchdown while running back Nick Chubb only managed 58 yards on the ground.

The Browns first matchup against the Steelers in 2020 was a dud. The Steelers jumped out a 24-0 lead in the first half and never looked back. Mayfield had one of his worst days as a bro (119 yards passing, one touchdown, two interceptions) and the Browns never got a chance to find a rhythm on offense.

It was only fitting that the Browns ended their playoff drought against the team that’s done nothing but torment them over the past 10 years. With a spot in the playoffs on the line, the Steelers rested Rudolph and clinched a playoff berth with his three-yard run on third and two in the final minute. The Browns opened the fourth quarter with a 24-9 lead, but the Steelers scored 15 unanswered in the fourth quarter to set up Mayfield’s run.

What’s the one thing better than clinching a playoff berth against a storied rival? Knocking a storied rival out of the playoffs. With coach Kevin Stefanski sitting in his basement with COVID-19, the Browns shocked the football world by dismantling the Steelers in the wild-card round to pick up their first playoff win in more than a quarter-century. The Browns burst out the door with 28 first quarter points, 21 of which came off turnovers. While Cleveland’s season ended the next week with a loss to the Chiefs, the victory over the Steelers was a defining win for Stefanski and the Browns.

5 Takeaways From The Cleveland Browns' Win Over The Detroit Lions

It was a closer game than anyone in Northeast Ohio would have liked, but the Browns eked out a win against the NFL's worst team.

New England's drubbing of the Browns was one of Cleveland's worst losses in the Kevin Stefanski era.