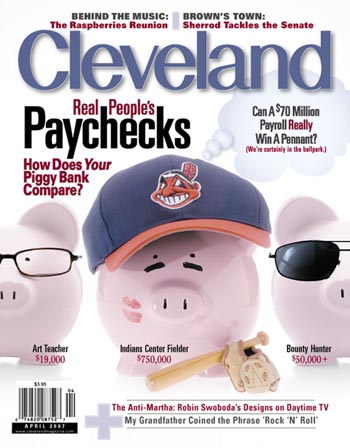 One of rock 'n' roll's most influential power-pop acts puts its legendary disputes aside for the encore no one ever thought would happen — even them.

Better known for its reds, Spanish is all white with us.

Chilean sea bass with roasted red pepper and lobster cognac sauce is one example of Lago's predilection for all the ocean has to offer.

Back to the Future

Cleveland television favorite Robin Swoboda is back with •a new Fox 8 show •and the hope that her mix of laughs, lessons and real life can stand up to the tough morning competition.

We take a look inside Jacobs Field from the home run hitters to hot dog vendors to see who makes what.

Sure, CEO's and professional athletes make the most. But who earns more: a weapons repairman in Kuwait or a schools superintendent? How does a priest spend his extra cash? What's a bounty hunter make per capture? How does the mayor of the fourth-richest t

What's the secret to winning in swing-state Ohio as a Democrat? Ask Sherrod Brown, the first U.S. senator from his party in 12 years, and he'll tell you: "Stand for something." Now he's off to Washington to fight for fair trade, cheaper prescription drugs, a strategy for withdrawal in Iraq and to make some powerful new friends.

Best Use of Color

From the Ground Up

Making changes in your life and your look can be an exciting prospect. When it comes to cosmetic surgery and dental work, you want to be comfortable with the doctors to whom you turn for help. And finding the right salon and spa can make you feel great&nb