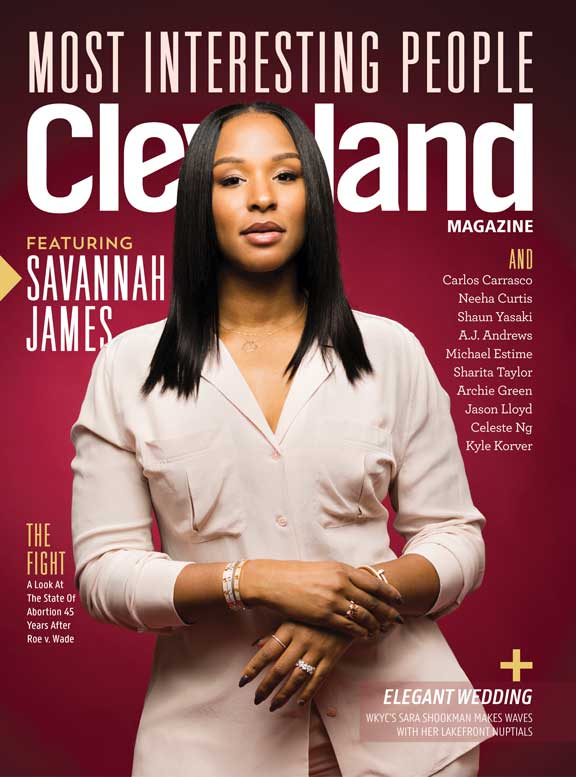 She's much more than LeBron James' wife — she's an influential powerhouse as the founder of Women of Our Future.

Get Spicy With Our Seasoned Guide

Punch up the menu with uncommon spices for health and flavor.

Head To Heck's Express For Gourmet Food On The Go

Fadi Daoud takes what we love from Heck's Cafe and makes it fast and easy.

Kick Off The New Year With These Superfruit Acai Bowls

These five spots will get you hooked on the healthy new trend.

An opulent renovation is paired with a modern menu at the downtown steakhouse.

Outside the Cleveland Museum of Art, The Thinker is the target of an unsolved attack.

A college reunion breathes fresh life into the past.

The Storm Chaser is 375 feet of techno-induced water fun.

Frank Jackson Is Back At Work

How to Go Viral With The Greatest of Eavesdropping

We peek inside BJ Colangelo's viral Twitter thread about two women who suspected their husbands of cheating on them with each other.

From injury-riddled rookie to Cleveland icon, Zydrunas Ilgauskas is honored by the Greater Cleveland Sports Commission this month.

A.J. Andrews takes the gold as the first woman to ever win the Rawlings Gold Glove Award.

As the designer of Ready to Stare, Dalessandro is drawing attention to the importance and inspiration of plus-size fashion.

With a new spin studio downtown, the Harness Cycle owner is on a roll.

Green is an advocate making mental health the forefront of his rapping career.

As the first Hispanic diocesan bishop in the entire Midwest, Perez holds powerful influence with a bilingual background.

The Cleveland Indians pitcher, known for his nasty slider, has a fun, artistic side to him. Just ask his teammates.

As the founder of Birthing Beautiful Communities, Farmer is bringing doulas to mothers in need.

At only 18 years old, the entrepreneur runs a successful youth marketing company aimed at Generation Z.

This Rust Belt author examined his own mortality by building his coffin with the help from his father.

As the chef and owner of TownHall, Salerno has been shaping the healthy eating community in Cleveland.

The military veteran serves as a mentor for transgender youth.

No bones about it--Miller is a beast, winning the World's Strongest Disabled Man's women seated division in London.

The Cleveland sports author has a blueprint for running the Cleveland branch of The Athletic, and it's working.

These bros buoy Q104s The Jeremiah and Jeff Show with a host of laughs.

The Cleveland Heights councilwoman wants to get more women into political office.

The Ukrainian-born siblings are cooking up new culinary adventures after working at Hub 55.

The Cleveland 19 News anchor brings her worldly experience to Cleveland.

She's much more than LeBron James' wife — she's an influential powerhouse as the founder of Women of Our Future.

The figure skater competed in the 2017 Special Olympics World Winter Games in Austria.

This Noble Beast founder doles out one hell of an altbier.

The founder of Kids of 216 is paving the way for future generations to find successful careers in the construction trade.

He's contributed to several comic book franchises over the last 50 years, and now his creation, Black Lightning, is getting his own TV show.

This North Ridgeville native is a belly full of laughs as Billy Sparks on the CBS hit Young Sheldon.

Stand Up to Gun Violence By Speaking Out About Loss

In order to reckon with Cleveland's gun violence, we must break through the silence it creates.

The Hard Thing To Do

Forty-five years after Roe v. Wade, legislative pressures on abortion access and women’s health care continue to increase. As clinics dwindle, Fred Sokol and other anti-abortion activists see the closings as motivation to step up their efforts.

The LGBTQ club that opened in 2001 closed in November.

The bi-monthly treat helps us celebrate the Cavs with great gear.

What Mayor Jackson Needs To Do

With his historic fourth term, Frank Jackson needs to lead with a sense of urgency.

Rachel Zake, who's appeared on Grey's Anatomy and Private Practice, is part of the Playwrights Local Roundtable Series.

Chill Out and Detox With Our Help

Flush away all that bad mojo with these yoga poses.

Godmother of Rock Retakes the Stage

Helmed by a team of experienced writers, the literary magazine will publish writers from across the nation.

Jack Mueller Turns A 1920s Bank Into An Art House

The two-story former Key Bank building is out of this world.

New Production Asks How To End Poverty In 90 Minutes

The Cleveland Public Theater show asks the audience where to donate $1,000 to fight poverty.

The traveling bookseller has opened a permanent location at 78th Street Studios.

In a new Cleveland Print Room exhibit, the Fairview Park native documents the plight of human rights defenders in Colombia.

Whether you're a beginner or have a green thumb, this Detroit Avenue shop has the plant for you.

Let The Seasons Be Your Guide For Wedding Beauty

Is your wedding a winter? Take cues from the weather when planning your make-up look.

Originality, flexibility and efficiency are key to a well-oiled wedding day.

Check out these three must-have exercise items from local shops.