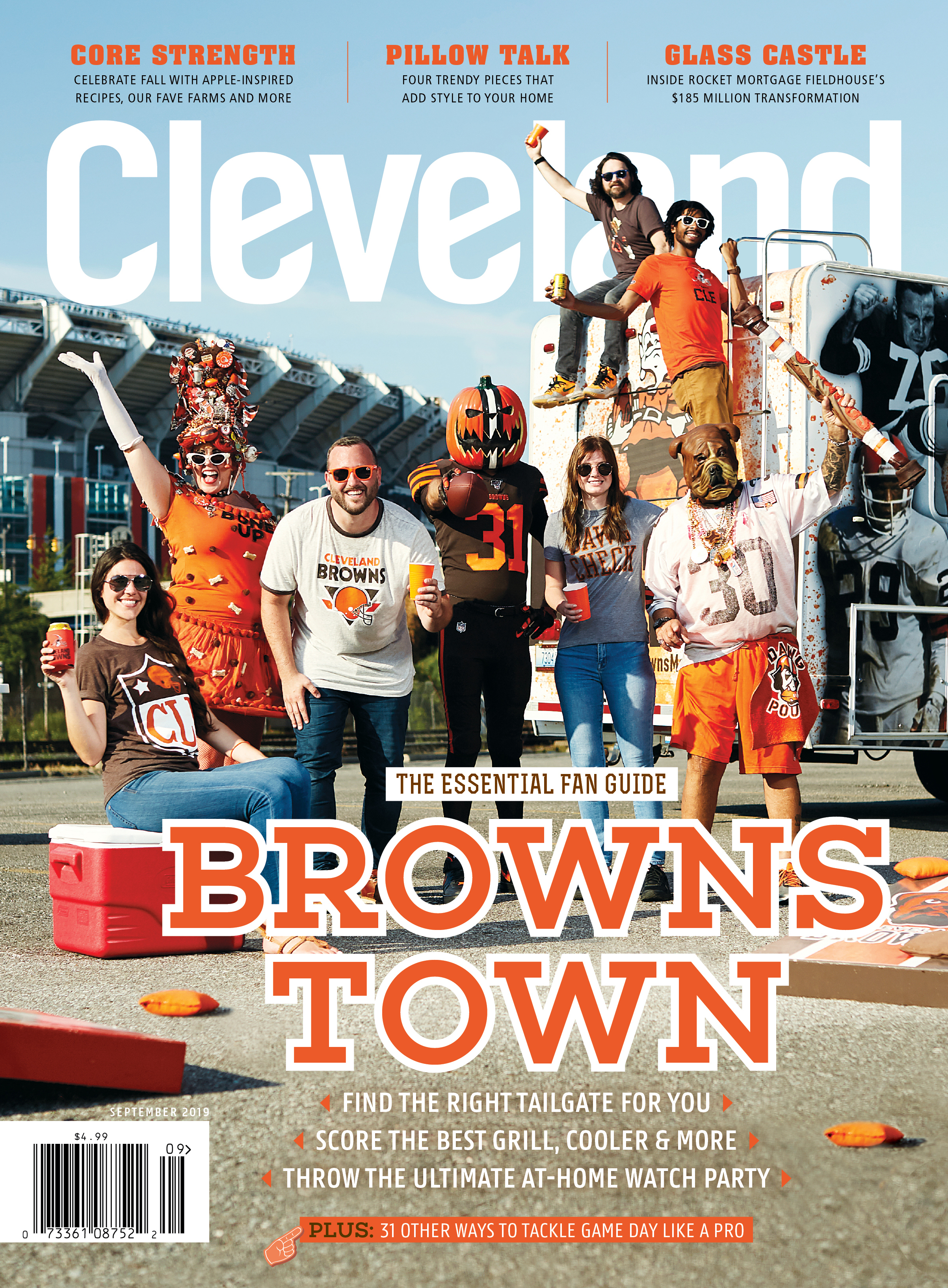 We've got a bushel of ideas for how to cook with all those apples.

In honor of the popular food truck opening a brick-and-mortar space, we share our three favorite sandwiches.

Embrace Sobriety With These Three Mocktails

Urban Farmer, Distill Table and The SpeakEasy At Quintana prove you don't need booze to craft a great cocktail.

Michael's Genuine Food & Drink Is Simplicity With A Twist

The Van Aken District restaurant is an extension of Michael Schwartz's Miami-based empire.

The Heart-Wrenching Story Behind Zuzu's Meals

One year after her son's death, Kholoud Jallad opens a restaurant in honor of his memory.

The dish at the Bay Village restaurant uses activated charcoal for a spellbinding effect.

Three giants of Cleveland's arts world came to see it.

3 Reasons Freddie Kitchens Is Right For The Browns

The former college quarterback is a breath of fresh air for fans. Here's why.

3 Reasons The Browns' Chomps Is A Very Good Doggo

David Raymond, the former Phillie Phanatic and founder of the Mascot Hall of Fame, gvies us three reasons Chomps works as a mascot.

Are You Feeling As Confident As These Browns Fans?

Baker Mayfield, OBJ And The Rest Make It Safe To Dream

Behind The Cover: Meet #TheBrownsMobile

Test your Brownies fandom with this placement quiz.

Cribbs In The CLE Displays The Couple's Dynamic Relationship

Vince "D. Dawg" Erwin's first game was a memorable one.

Make the most of the famed FirstEnergy Stadium Section with these pro tips from Denny "Dog Face" Kochever.

Nearly 30 years after his NFL debut, Metcalf talks about always considering himself a Brown and more.

The Browns are back. From finding the right tailgate to life lessons from the Dawg Pound, here's everything you need to know to tackle game day like a pro.

How One Browns Fan's Tragedy Cemented His Fandom

Browns fans accepted Scott Miller when he needed them most.

How To Bring The Muni Lot Home

Plan the perfect Sunday football fest with these tips.

Jim Donovan On Life As The Voice Of The Browns

The play-by-play announcer shares the lessons he's learned after 20 years as the voice of the Browns.

Joe Thomas Misses The Locker Room, But Retirement Is OK

The future Hall of Fame Browns lineman shares lessons from a career in the NFL.

Lessons Learned From Stacks of Calendars

Daily jots in a calendar add up to a journal. Why tracking life's passage matters.

From the perfect grill to cornhole boards and a beer cooler, don't head to the lot without these items.

Myles Garrett's Got His Eye On Post-season Prizes

The former No. 1 overall pick talks defensive player of the year and how defense still wins in the NFL.

Never, Ever Give Up CLE Inspires Hope

Pull Off The Perfect Sunday 'Fit This Season

Tailgate in style with these fashionable Browns pieces from CLE Clothing Co., Only In Clev and Whisky Island Clothing.

The Cleveland basketball and concert arena has more going for it than just a new hame. Here are five reasons we can't wait to get inside.

The LGBTQ bar's Browns Backers with a Twist puts the fun in football Sundays.

From the perfect spot for you and the do's and don'ts of tailgating, we've got you covered.

The Gap In Our Renaissance

Cleveland's economy is out of a 10-year slump. But who is benefitting?

As the Akron band returns to Cleveland, we talked to guitarist and singer Dan Auerbach about its first Cleveland show and the local guitar god that inspired the new album.

Cribbs In The CLE Displays The Couple's Dynamic Relationship

Dobama Theatre: 60 Years In The Spotlight

The Cleveland Heights theater company has been on the cutting edge of stage work since its founding in 1959.

Inspired by a C.S. Lewis novel and Greek mythology, barefaced is a dance piece that follows the rift between two sisters.

Learn To Rock In The Interactive Garage

The Chicago Comedian appears at the female-founded improv and comedy festival, held Sept. 19-21 at Mahall's 20 Lanes.

Grab and go any time, but don't miss out on this event the first Tuesday of each month.

A Clevelander's Guide To Winterizing

The cold is coming, Cleveland. Make sure your house stays cozy warm with this advice. By Carly McFadden

Beacon 515 is the first apartment building to be built downtown in more that 45 years.

The shop opened in June in Ohio City and offers greeting cards, candles, accessories and more.

Color Outside The Lines At CMA's Chalk Festival

The second annual event, held Sept. 21, has expanded offerings with a move to Cleveland Public Library.

This after-school and weekend program teaches kids to code in a fun way they can understand.

How To Make The Most Of Your Private School Visit

We talked to local admissions experts about how children can make the most out of their school visits — and how parents can, too.

Vital stats on the East Side coed boarding school.

Report card for the Christian coed school in Willoughby Hills.

Vital stats for the coed school in Cuyahoga Falls.

Vital stats on the Catholic coed high school in Elyria.

Report card for the Jewish coed academy in Beachwood.

Vital stats on the preK-12 coed school in Gates Mills.

Vital stats on the all-boys school in Austinburg.

Vital stats on the preK-12 all girls school in Shaker Heights.

Report card for the coed school in Gates Mills.

Updated stats on the jewish co-ed school in Cleveland Heights.

Vital stats on the preK-12 school in Huntsburg Township.

Vital stats for the coed Catholic high school in Mentor.

Vital stats on the coed school in North Ridgeville.

Vital stats on the all-girls school in Shaker Heights.

Important stats on the Lutheran coed school in Sagamore Hills.

Vital stats on the all girls school in Cleveland Heights.

Vital stats on the coed high school in Rocky River.

Vital stats on the all-girls Catholic school in Rocky River.

Vital stats for the coed high school in Chardon.

Private Schools: Our Lady of the Elms School

Vital stats on the all-girls Catholic school in Akron.

Vital stats on the Catholic coed high school in Parma.

Report card for the Catholic all-boys school in Lakewood.

Vital stats for the all boys Catholic high school.

Vital statistics on the Catholic coed high school in Cleveland.

Stats to know about the Catholic coed high school in Cleveland.

Vital stats to know on the co-ed Catholic high school in Garfield Heights.

Vital stats on the all-boys K-12 school in Hunting Valley.

Stats to know on the Catholic coed high school in Cleveland.

Report card on the coed boarding and day school in Hudson.

Why Parents Choose Private Over Public

Family legacy or the promise of Ivy League acceptance isn't the only thing that drives private school parents.