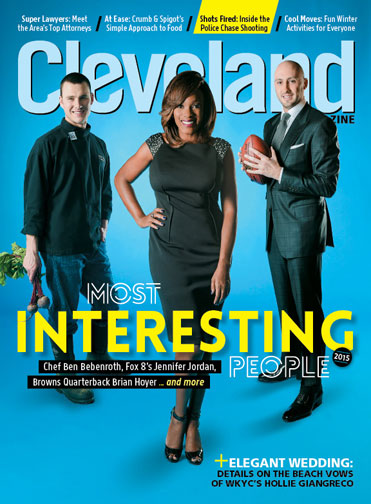 Ring in the New Year with our bubbly breakdown.

Once just culinary startups, these craft food companies are open for business as full-blown storefronts.

Get your kids interested in cooking with these tips from chef Jonathon Sawyer.

A Case for Winter

The UFC fighter still works his day job as a firefighter and EMT in Oakwood and Valley View.

The clock is ticking for the city of Cleveland to finish a batch of new projects in time for the Republican National Convention.

CLESound invades your podcast rotation with a strong lineup of local personalities.

Cleveland Police Officer Michael Brelo is charged with manslaughter. Prosecutors claim that after a high-speed, 62-car chase in November 2012, Brelo jumped onto the suspects' car and emptied his gun into them at close range, killing them. The former Marine's case has implications for the nation's roiling debate about police and excessive force — and the differences between war and policing.

Watch out Tremont and the Theater District, the following locales are trying to become the next hot spot.

Dave Sabol's Told storytelling event shows us that we have more in common than we think.

Encouraging the city's young people to speak out isn't just good education. It's key to remaking our city.

As Heard on Film

With a new album, the Modern Electric continues on a quest for a life just like the movies.

The 78th Street Studios transforms its lower level into an artists' sanctuary.

The burning of the Cuyahoga River sparks a new Cleveland Public Theatre production.

Apollo's Fire tells the musical story of a day at Johann Sebastian Bach's house Jan. 22-25 in celebration of the composer's 330th birthday. Here are a few more numbers that caught our ear.

Girl's Best Trend stocks its shelves with local items for the home, office and more.

Working out and eating better are back on our list of resolutions, but we're also looking into what these shop owners will be doing to amp up their style in the new year.

While food allergies among children are rising, medical research has few answers about how to treat them. So families and schools must find effective ways to keep kids safe.