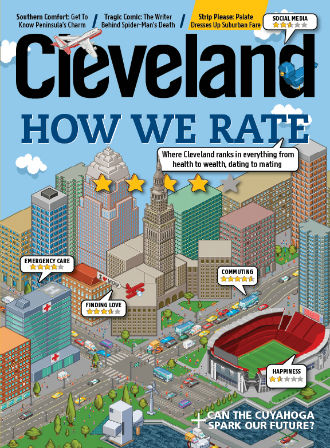 A Dish We Love: Wine Burger

ESPN's Power Rankings. Men's Health's Metrogrades. Forbes' Most Miserable Cities. As media, we love rankings — because as readers, we love rankings, a piece of solid footing in an otherwise shaky world.

6:45 on a weekday morning in July. I pull up on my bicycle in front of Cumberland Pool and look through the chain-link fence at the lap swim area. Most of the 10 lanes are already taken.

How We Rate: Education

How We Rate: Environment

How We Rate: Health

How We Rate: Home

How We Rate: People & Places

How We Rate: Philanthropy

How We Rate: Recreation

How We Rate: Romance

How We Rate: Technology

How We Rate: Work

In the Neighborhood: Downtown Peninsula

Inspired by her granddaughter, Karen Bowersox created a clothing line for those with Down syndrome.

Comic book writer Brian Michael Bendis' Rust Belt-gritty vision caught the eye of Marvel Comics in 2000. Since, he's gone on to create storylines for some of our most beloved superheroes. A consultant on the Avengers movie filming here this summer, the Un

The city's storefront renovation program brings a new look to a street near you.

After decades as our city's symbol of demise, can the Cuyahoga River be transformed by a group of rowers, environmentalists, developers and civic leaders into a vibrant place to live, work and play?

Cleveland is shrinking fast. The city faces a bitter future because its political leaders failed to grasp a piece of it.

Tony Award-winner Idina Menzel and the Cleveland Orchestra unite at Blossom Music Center for a mix of Broadway hits and a little Lady Gaga.

Tied Up and Tousled headbands give locks a trendy flair.

An array of less invasive cosmetic procedures can subtly erase signs of age.