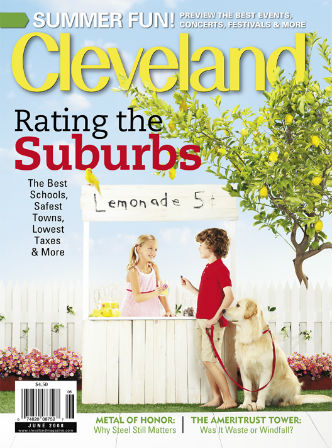 Stages: In the Spotlight

Can you spot the distinctive elements of the dueling Dishes?

With collectors buzzing about the 2005 Bordeaux wines, we uncover a few hidden gems.

The baby Georgianna Garry was carrying had severe birth defects that gave him little chance to survive. She had every right to abort the pregnancy when she found out, her doctor told her. But she decided to carry her son,Liam

As 100.7 WMMS celebrates its 40th birthday it has a new a.m. drive-time show with “Rover’s Morning Glory,” a new marketing image (hint: there’s no buzzard with a mullet anywhere) and a fresh take on what rock radio needs in orde

LTV’s Cleveland Works once employed 15,000 of our neighbors, family members and friends. Today, 1,700 workers still report to the Industrial Flats to make what has defined Cleveland as a manufacturing town for the better part of the last 100 years.

Skate Night at Euclid’s Rollerdrome brings out darting, jumping dancers on wheels. Time, place and tradition have given Cleveland a roller skating style all its own.

Fifteen-year-old Caroline Goulding has already appeared on NBC’s “Today” and PBS’s “From The Top: Live from Carnegie Hall,” and has twice been accepted to a prestigious Juilliard program. Meeting Martha Stewart, thou

Summer brings back our writer’s most cherished amusement park memories, when killer whales and dolphins leaped through the air at SeaWorld, thrilling her family. This year, Geauga Lake is gone, the final chapter in the loss of a Northeast Ohio landm

The Band Plays On

Jimmy Dimora, Tim Hagan and Peter Lawson Jones bought the Ameritrust Tower to give the county a new home — then figured out they couldn’t afford the project. They ignored three advisers’ warnings about the project’s cost. They said it would pay for itself — but it would’ve added millions a year to the cost of government. Now, they’re selling the tower at a loss of $6 million — and counting.

Feast of the Assumption

Music in the Meadow

The Cleveland Museum of Art’s Armor Court reopens this month.

The Wizard of Waste

Wish You Were Here

Marilyn Q. Sparks,81
Chair of the city’s architectural review board

Tell us what you love about your community — or what you hate about Rating the Suburbs.

Summer on the Slopes

When the snow finally melts, it’s the perfect time to play in Colorado.

After building a national brand on teaching how to turn around-the-house products into family memories, John and Danita Thomas are now working to make Kid Concoctions a multimedia entity