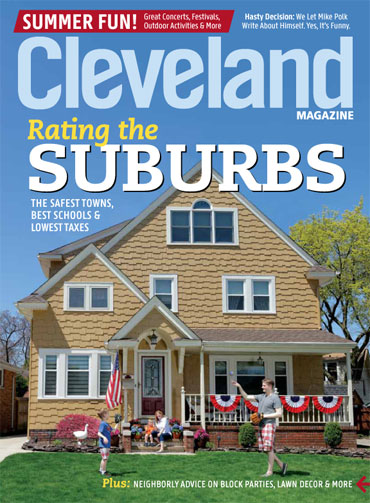 A Dish We Love: Pepper-crusted Tuna

Tribe fan Alex Justice talks to us about being called up to Major League Baseball's Fan Cave.

In the Neighborhood: Kamm's Corners

Margo Hudson got a second chance at her education. Now she helps others follow her path as a tutor. But the route to a GED diploma is about to get thorny.

He put the words "Cleveland" and "tourism" on the lips of the nation, he coined the phrase "The Factory of Sadness," the YouTube video of his cat has more than 9 million views. He's sort of a big deal in the realm of unprofitable celebrity only the Intern

Josh Womack and his comedy team want to pen your best-man speech. Here's why you should let them.

The upstart @InTheCLE offers fresh voices (and gives you one).

If summer blockbusters aren't your style, check out these films showing at the Cleveland Institute of Art Cinematheque

The Kings of Summer embraces youth, imagination and the splendor of Ohio's longest days.

Brad Ricca's Super Boys delves deep into the origin story of an American icon and the two Clevelanders who launched him.

The summer concert season is upon us. We know, you have your favorites. Here's a trio of ours.

From exploring the world's oceans to taking in Pixar films set to music, check out these six events for all ages.

Summer Fun Guide 2013: Festivals For All

Whether you're looking for food from your favorite chef or pirate pointers from Capt. Jack Sparrow, we have a festival for you.

We offer five ways to enjoy the outdoors just a little more this year.

Ann and Nancy Wilson are enjoying renewed acclaim as Rock Hall inductees and the stars of a summer tour.

Verb Ballets' summer series melds cultures and styles to kick off its season.

Phillip Phillips talks about American Idol, his musical influences and his tour with John Mayer.

From Shakespeare to Spamalot: Check out these cool summer productions.

Spend a night under the stars without leaving the comforts of your own home with these simple rules.

The cement goose isn't just a a decoration, it's a conversation piece. Once owner agreed to give us a fashion show.

Give grandma a break. Take our advice on how to hire the best person to watch your children.

Make new friends and get to know your neighbors by organizing a block party using these great ideas.

Track down garages-sale finds buried beneath mounds of dusty records and clothes by following these clues.

Chagrin Falls' Haven Style House is a one-stop shop for everything a woman needs to assemble her look.